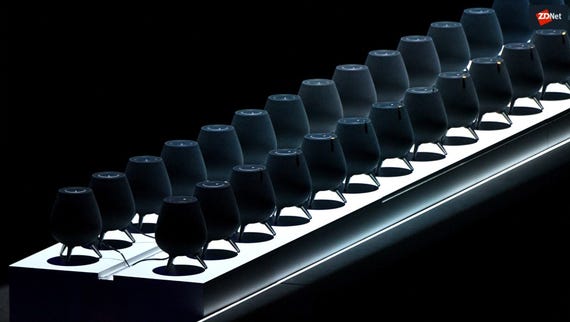 Earlier this month, at Samsung's Unpacked event for the Galaxy Note 9 in New York, the company finally unveiled its smart speaker, the Galaxy Home, after much talk and delays.

Details of the Bixby-powered AI speaker are sparse, but Samsung says it boasts six speakers, eight microphones, a subwoofer, and sound by AKG. Samsung also says its smart speaker is the only one that "moves a wave of sound toward you when you ask it to".

We do know, however, that the Galaxy Home will enter a smart speaker market that is already a little crowded. Google and Amazon's respective smart speaker offerings accounted for over 60 percent of the global market in Q1 2018, according to Canalys, and along with Apple's HomePod make up the top three speakers in the US.

All three have a head start over Samsung; the Amazon Echo will have had its four-year anniversary before the Galaxy Home hits the shelves. In Samsung's home country, meanwhile, SK Telecom launched its NUGU speaker in 2016 and another portable version last year, while chat giant Kakao launched its Kakao Mini last November.

So what will Samsung have to do to make up lost ground? And what is it about the Galaxy Home that will a) get on board first-time smart speaker buyers, and b) convert Google Home and Amazon Echo users?

Apart from leading sound technology, Samsung has enlisted the services of Spotify as part of a long-term deal that will make it the "go-to music service provider" on Samsung devices -- a clear statement of intent from Samsung and a means to take on Apple Music. The streaming service will be tightly integrated with SmartThings and Samsung devices going forward, including Galaxy Home.

Galaxy Home will also work as a SmartThings hub, meaning users will be able to control all their smart home devices through voice, although SmartThings users can already do this with Google Home. But generally, so far, so good.

Two things about the Galaxy Home could put consumers off, however. Firstly, let's address the Galaxy Home's odd, cauldron-like design, which surely can only be that way for reasons of functionality, as opposed to Samsung possibly thinking it's pleasing to the eye. It would be a surprise if feedback on the design -- a lot of it negative -- doesn't lead to a second version that's aesthetically more of a welcome addition to a person's living room.

Reports also suggest the device is bigger than any smart speaker on the market, and promotional pictures give the impression that it's barely small enough to hold in one hand. What makes something like a Google Home Mini so great is that it's small, portable, and pretty unobtrusive in appearance. Galaxy Home looks to be none of those things.

lso: Samsung Galaxy Watch: Everything you need to know CNET

The second factor is price. Samsung has promised more details on the device and its release date at its developers conference in November, but a report from The Wall Street Journal suggests the Galaxy Home could be around the $300 mark.

It's worth bearing in mind that going into the holiday season last year, Google Home Mini was on offer at some retailers for as low as $29 in the US and £34 in the UK. Samsung is boasting sophisticated, market-leading sound technology on the Galaxy Home, but we all know that innovative hardware and price tags often align.

However, Samsung's delay may be cleverer than it seems, or than the company intended. According to recent research from Strategy Analytics, smart speaker vendors entering the market with budget offerings are finding it hard to compete with the Amazon's Echo Dot and Google's Home Mini. Meanwhile, the premium end of the market offers opportunity to vendors that are offering superior build and audio quality, it added -- examples of which could include the Galaxy Home or the audio-focused Google Home Max.

This means consumers who have had their $30 smart speaker for a year or two may be looking to upgrade to some better audio, making the Galaxy Home's entry perfect timing, and Samsung's future in the smart speaker space look promising. This is not to mention the support from Samsung die-hards who want any accompanying piece of hardware they can get their hands on. Likewise, Bixby-powered smartphone users may want to embrace more Bixby-backed products for a more seamless experience at home and on the go.

Samsung Galaxy Home is neither going to set the world alight nor be consigned to the embarrassing-failure bin populated by the likes of the Galaxy Note 7. It will be somewhere in the middle, a constant seller, and later iterations will eventually be part of a smart speaker market that's as densely populated as the smartphone market is today.

Galaxy Home could be the last piece of that jigsaw for a Samsung-powered smart ecosystem. It's just a surprise it's taken so long to arrive from a company that's rarely had to play catch-up.