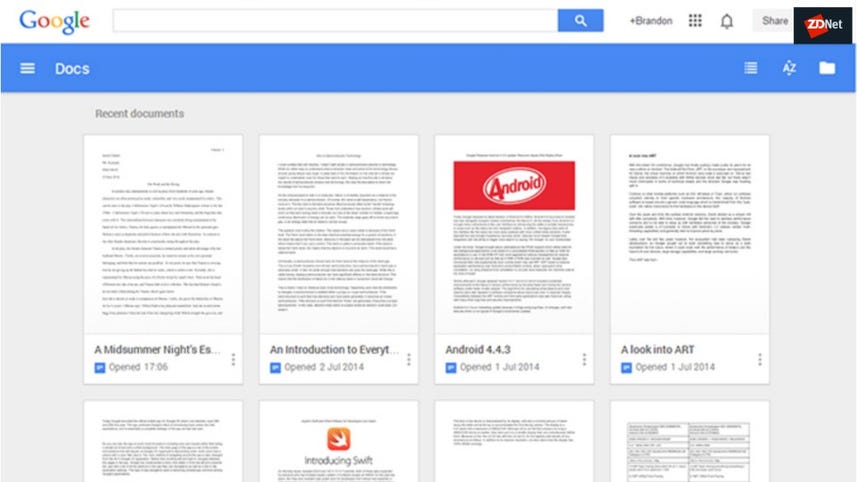 Google is focusing on faster collaboration in its latest version of Google Docs, Sheets, and Slides.

Google has introduced a bunch of new version-control refinements, formatting templates with built-in add-ons, and smart enterprise information search from within its productivity apps.

Among the version-control updates, there's now an option to give a different name to each version of a document the team is working on as it progresses from the first draft to final.

Changes to each named version can be tracked under version history, offering an easier way to track progress and flag to others when the document is finished. There is also an option to only show named versions.

Previously, suggesting a change to a team document could only be done from the desktop, but now these suggestions can be also submitted from Android or iOS device. This feature is available from the three dots menu icon on the bottom right of the screen in all three productivity apps.

To save time when reviewing punctuation edits, users can now approve or reject all edit suggestions at once in the apps. There's a new tool to see a clean preview of Docs without comments and suggested edits. This tool offers a preview of what it would look like if all the suggestions were either accepted or rejected.

There's also Business Process Manual by Lucidhart, and Consulting Agreement from PandaDoc. To differentiate these from normal templates, those built-in add-ons are marked with a blue Add-on tag.

The search function is now available through the Explore button at the bottom of Docs and Slides, which will show important details from Gmail, Drive, Calendar, Sites and so forth under the Cloud Search tab.

Following this year's Gmail phishing attack, Google introduces a way for its enterprise customers to better secure which third-party apps can get access to user data.

The companies are aiming to make Box a third-party repository for content stored in Google Docs, Sheets, and Slides.

An obvious feature has finally come to the iPad Pro -- Apple's "business iPad". However, there's still one feature missing.

Google Docs aims to up its presentation template game

Google is adding to its template library as it aims to court education and small businesses and close a historical gap with Microsoft's Office.