Artificial intelligence, simplified Android developer tools, and Google's play to be your digital assistant of choice are among the key themes from Google I/O 2017.
Written by Larry Dignan, Contributing Editor on May 19, 2017 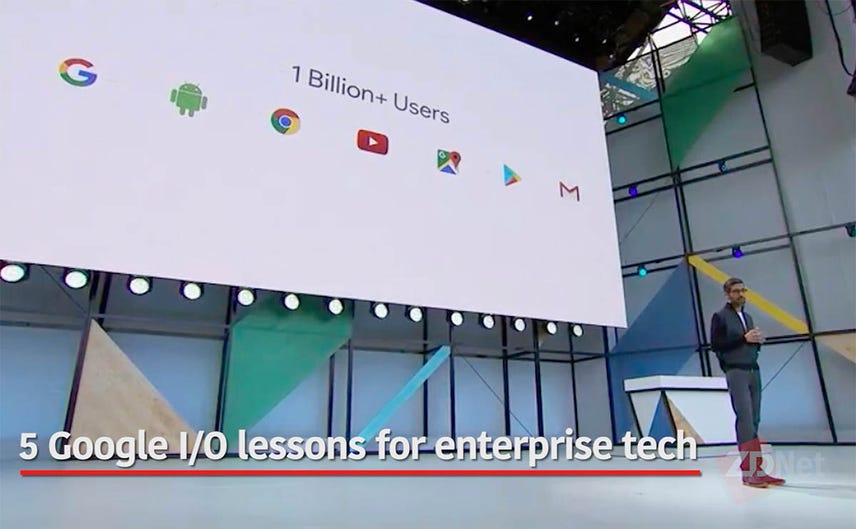 Google served up a bevy of announcements, technologies, and goodies for developers, but it also highlighted a much larger strategy where the search giant still organizes the world's information, but also begins creating systems that'll add context, delight you, and potentially provide more insights.

Here's a look at the key takeaways from Google I/O this week.

Artificial intelligence and machine learning is Google's competitive advantage and will be embedded everywhere. Google CEO Sundar Pichai talked AI non-stop during his Google I/O keynote and he's rearchitecting the company to be "AI-first." The extent of Google's AI reach is everywhere from Google Photos to Google Assistant to Google Cloud Platform to damn near every other product or service the search giant has. Google's AI efforts will even tap into human resources as it pivots to target job searches.

This is a hugely important development as it marks a step forward in the quest to enable the machines to build their own AI models. Building models today is still a massively time and processor intensive task which is mostly done manually and is very expensive. If machines can build and train their own models, a whole new range of possibilities is opened-up in terms of speed of development as well as the scope tasks that AI can be asked to perform. Automated model building is one of the major challenges of AI and if Google is starting to make progress here, it represents a further distancing of Google from its competitors.

Read also: Google bets on AI-first as computer vision, voice recognition, machine learning improve | Google's strides in computer vision leads to Google Lens feature | CNET: 5 reasons to use Google Photos on your iPhone | TechRepublic: How to get Google Assistant on your iPhone

Android is simplifying. Android has received a broad rewrite, but the latest effort -- Android O --is cleaner and simplifies notification, cutting and pasting, app functions via Instant Apps and is going to bring in a lot of contextual information via AI. Will Android O be the most revolutionary release for the smartphone? Probably not. But that's OK if it simplifies tasks overall. The other thread here is that Android is simplifying its frameworks for developers too. These developers will appreciate more efficiency since they'll be tapped for other Android flavors like Android Things.

Photos: Android through the ages

Google Assistant may push Apple's Siri out of the way. Let's face it -- Siri isn't the smartest assistant on the block. Google Assistant is smarter and getting more so via AI and machine learning. By bringing Google Assistant to the iPhone the company is ensuring it will have a big role on iOS beyond Google Maps and core services.

Google Assistant comes to the Apple iPhone: in pictures

Infrastructure matters. Google unveiled the next generation of its custom-built Tensor Processing Unit (TPU), a chip designed for machine learning. The first generation of TPUs, revealed at last year's I/O, were designed to run already-trained machine learning models. Pichai said that an AI-first approach means new infrastructure approaches are needed. This infrastructure is likely to be consumed largely through the Google Cloud Platform, which is aimed at enterprises.

Android Things may be the most interesting flavor of Android going forward. Android Things is being embedded into more devices via partners such as NXP, which is being acquired by Qualcomm. Android Things plays into Google's Cloud IoT Core platform and is going to be included in multiple edge systems. While Android Things will gain more traction in the months to come, it may be one of the more notable Android siblings.

Google targets the HR market. Pichai said Google will aim its search at connecting people with jobs. The company will also use machine learning and AI in its approach and has partnered with a host of players in the job search game. Ultimately, Google is likely to power more enterprise job search like it has with FedEx and Johnson & Johnson. What's unclear is whether Google will expand into a broader human resources suite to go along with its Google Cloud Platform and G Suite.