Businesses in the pilot group will receive automated calls from Google ahead of New Zealand's Labour Day public holiday.
Written by Aimee Chanthadavong, Contributor on Oct. 22, 2019 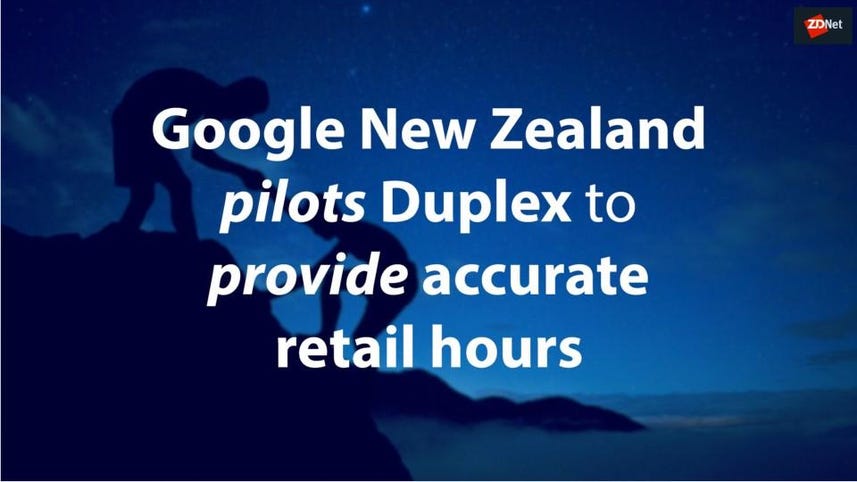 Google New Zealand has launched a pilot using its Google Duplex technology to confirm the store hours of local businesses ahead of the country's Labour Day public holiday on October 28.

As part of the pilot, Google will use Google Duplex, which uses artificial intelligence (AI) to carry out human-like conversations over the phone, to automatically call businesses in the pilot group to confirm their operating hours for the public holiday. Once confirmed, any changes to operation hours will be automatically updated and reflected on Google Maps and Search.

"This not only helps people save time during busy holidays, but also ensures that businesses maximise foot traffic at their stores," Google Engineering VP Scott Huffman wrote in a blog post.

He added that if businesses want to opt-out of receiving calls from Google, the company will honour it.

"We're also mindful of including controls for businesses," he said.

Businesses are also able to continue to update their hours by calling Google or via settings in Google My Business.

The features of Google Duplex was extended at this year's Google I/O to allow the virtual assistant to go through time-consuming tasks like filling out forms online to book a car reservation.

"We want to make this experience better for both users and businesses," Google CEO Sundar Pichai said, during his keynote at the event where he demonstrated the car reservation use case.

When a user asks Google Assistant to book a car, Duplex will pull up the reservation page and automatically start filling out the user's personal information. It navigates through the site and taps into tools like Gmail and Calendar for relevant information like travel dates.

"It's acting on your behalf and helping you save time, but you're always in control," Pichai said.

When the AI tech was launched at last year's Google I/O, it only allowed users to book restaurant reservations over the phone.

Google I/O: From 'AI first' to AI working for everyone

Two years after adopting its "AI first" strategy, CEO Sundar Pichai showcased how Google is applying AI across its platforms to make a "more helpful" Google.

The feature lets users engage in a conversation with the voice-activated assistant without prefacing each statement with "Hey Google."

Google Pixel Watch vs. Apple Watch Series 8: Which should you buy?

Google Pixel Watch vs. Apple Watch Series 8: Which should you buy?