Google has clearly gone AI first, and Duplex is just one example. Here's a look at the big themes from Google I/O 2018 and what it tells us about the company's strategy.
Written by Larry Dignan, Contributing Editor on May 11, 2018 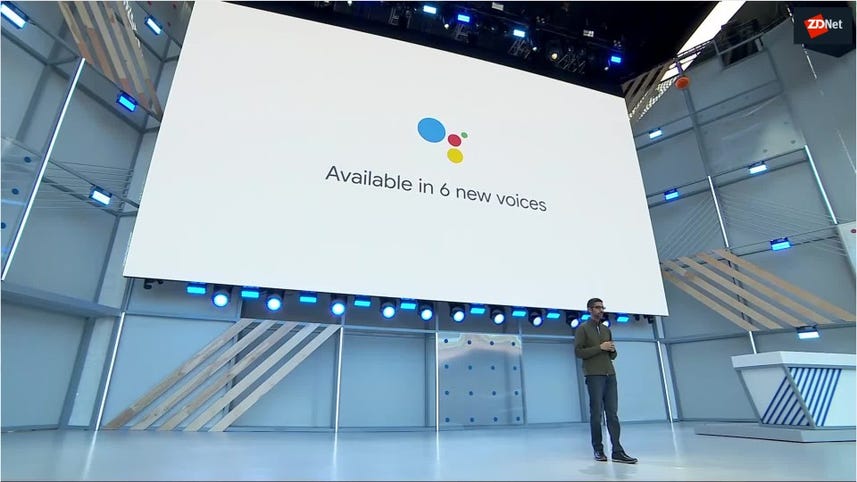 Google I/O 2018 provided a lot to consider when it came to artificial intelligence, mobility, and how data can be used to make services better.

But as Google's developer powwow is in the rear view mirror, it's worth considering the high-level takeaways and lessons, as well as what they tell us about the company's strategy.

Here's a look at the key themes from Google I/O.

Zack Whittaker pointed out what wasn't said at Google I/O. The company didn't mention the Facebook data flap and didn't speak to privacy during the Google I/O keynote. The omission was notable given that Microsoft CEO Satya Nadella devoted a good chunk of his Build 2018 keynote to the topic.

How has Google avoided the data control issue so well (for now)? Return on investment.

That difference between data and ROI is critical in any privacy discussion.

Google CEO Sundar Pichai in 2017 outlined how the company was looking to become AI-first. This focus on AI was a big shift from Google's Android-driven, mobile-first mantra in previous years.

What Google I/O 2018 highlighted was that every product and developer enhancement is viewed through an AI lens. Android's limits on screen time learn over time. The way Google handles photos is driven by machine learning. Google Assistant is improving each year. Google has custom processors to drive AI workloads (that'll be consumed via Google Cloud Platform). The list of AI-driven products goes on and on.

The big takeaway is that Google has reoriented its entire mission around AI. Google Research even changed its name to Google AI. Other tech giants lean that way, too, but Google has focus.

Duplex was something to behold, but there will be backlash

Google unveiled Duplex, a system that can hold conversations with humans in a realistic way. Pichai demonstrated how Google Assistant could make calls at a hair salon and make an appointment. Naturally, you'd get a notification and calendar entry on your Android device.

The unveiling of Duplex and Google Assistant's capabilities captured the imagination and also walked the line of being creepy. Chatting with a bot via text is one thing. Having a computer make calls for you is a whole new deal.

For me, Duplex is the first step toward having a digital twin that I can outsource tasks to. Sure, it's a bit creepy, but crazy useful. Now the details will be tough to navigate. Does Google Assistant have to disclose it's not human? Are umms and hmms a step too far on the realism front? And will humans shun a bot when it calls?

When it came to wellness, Google outlined a few key items worth pondering. Here are the key takeaways:

Name me one thing in Android P that you must have this minute.

Android has improved dramatically over the years, and frankly, I prefer it over the increasingly bloated Apple iOS. But the smartphone platforms have gone stale.

Today, Android is merely a vessel to highlight Google's AI prowess. And that's OK. Android becomes more useful, integral to my day-to-day and buys me time.

But Android also doesn't spur much OS lust in me. A new Android certainly doesn't inspire me to buy a new smartphone.

To drive this takeaway home even more, Android has become to Google what Windows has to Microsoft -- a platform that's useful, but it's just a sidebar to the main event.