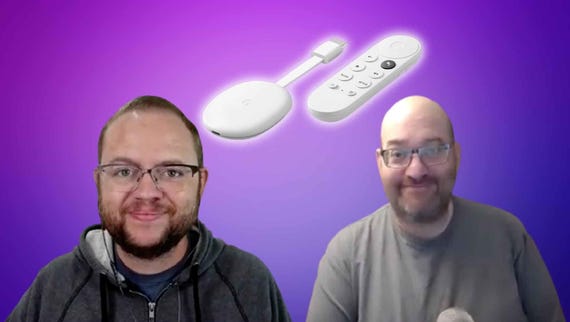 Progress for Pixel? Perhaps. But Chromecast is the Google device that matters
Watch Now

This week, on the heels of Apple's and Amazon's product announcements, Google held its fall devices event, which introduced a handful of products that many people have highly anticipated for a long time.

What does it mean for consumers? My main takeaway from all of this, especially if you bring it into context with what Amazon and Apple have rolled out over the last month, is it's evident that a content and services war is about to be waged. Consumers will have to make important decisions about what ecosystems they want to be part of and which services go along with those ecosystems.

Let's run down what the fronts of this upcoming war are going to look like -- and it's all going to be played out in your living room.

The best streaming devices Streaming your favorite shows has never been easier.

Google TV: Battle for your eyeballs against Apple, Roku, and Amazon

The first thing Google announced is an updated Chromecast with what it refers to as the Google TV operating system, a completely revamped version of Android TV. Incidentally, the new version of Google Play Movies on Android, the app itself, is also called Google TV -- kind of like what Apple has done with Apple TV. It's an OS, and it's an app. The device has a new streamlined TV controller, and it looks very Roku-ish.

There's no question that the device looks like it has potential and early reviews have been very positive. I never liked Google's previous streaming device offerings, all of which have fallen flat on me when I've tried using them over the years.

Google began experimenting with its streaming and smart TV platform over eight years ago, in 2012, with Nexus Q (which never launched). This was succeeded by the original Chromecast, which used your Android phone to do the heavy UI work. With about 30 million sold over that eight-year period, it's been moderately successful for Google, but I was never a fan. My ZDNet colleague Jason Cipriani didn't like the original Chromecast at all, as it didn't have a dedicated remote. In 2014, the company launched Android TV (which was embraced by a scant few OEMs).

Google has a significant hill to climb in terms of streaming boxes as many consumers already have devices in their living room for video content consumption, including smart TVs and video game systems like Microsoft Xbox and Sony PlayStation, which make up a very large portion of the streaming device population, according to market research firm Strategy Analytics. Google needs to bring some new things to the table to get people to switch from what they already have.

The product competes directly with the Fire TV sticks that Amazon recently announced, as well as Roku and Apple TV (assuming the company ever releases a new model, because it's two years old at this point). It has its version of Play Store, with 6,500 apps currently supported, and it has virtually every single streaming service supported on it -- except the Apple TV Plus service. However, it does have the new HBO Max app built into it, which is notable. Amazon Fire TV and Roku don't have HBO Max.

So, with these streaming boxes, all of this will come down to which services you have and whose questionable business practices you are willing to tolerate. Google is an advertising company and wants to harvest your information and then monetize it. Amazon wants to sell you lots of stuff, and Apple and Roku want to sell you devices and subscriptions.

The best smart speakers Here are your best options from Google, Apple, and more.

Google Nest Audio is effectively a beefed-up Google Home speaker; it's about 75% louder than the previous devices, the Home and the Home Max. It appears that Google is targeting this towards potential customers of both the Generation 4 Amazon Echo, the current Sonos One with voice control, and the Apple HomePod. (You forgot about that one, didn't you?)

Targeting Sonos is going to turn into a real battle because the two companies are now in the midst of litigation, as Sonos has stepped up its lawsuit against Google for patent infringement this week as it relates to its wireless audio technology.

Google made a big point in demonstrating multi-room audio, which is a major feature of Sonos. Although this technology has already been made available on older Google Home devices, it appears that this is something the company wants consumers to know now.

You can pair speakers in rooms for stereo, and the music can dynamically follow you around your home (versus Sonos, which simulcasts). You can do some of the other things that Sonos does, such as integrating other streaming music providers (currently, Pandora, Deezer, and Spotify are offered). The difference is that it's a whole $99 for a single speaker setup. That's half the price of the $199 Sonos One with Alexa voice control. It's clear to me that Google wants to take over that multi-room high-end audio space.

Google is not going to stop with this $99 device. When combined with the Google TV OS and Chromecast, it's evident that it will expand this audio/video device ecosystem. It will pursue this with licensed products that use this technology stack made by other companies or make other components under the Google Nest Audio brand, such as a soundbar, to compete with Sonos' own Beam and Arc, and Roku's Soundbar. It could also potentially introduce a wireless subwoofer to compete with Sonos', a rather expensive product at around $700. And it's a given that Google will also want to use the Nest Audio speakers for wireless home theater surround sound when combined with the new Chromecast and Google TV OS, as Sonos currently does when combined with other streaming devices.

With all of this going on, I would not put it past Amazon to defensively buy Sonos -- which currently has a market cap of $1.75 billion. It makes sense for them to do that because a few of Sonos' products are already Alexa devices, and I am sure it wants to see Google on the losing side of that lawsuit.

Amazon Echos also have multi-room capabilities, but they aren't as robust as Sonos, so I think it would be an excellent addition to its stable and other acquisitions made with Eero and Ring. It would be natural for Amazon to create a soundbar-type device that integrates Sonos multi-room music with paired Echos as surround speakers. With FireOS for streaming, all for less than what Sonos or Roku charges.

The devices themselves will create their ecosystem fiefdoms and customer silos, much like the mobile operating systems already do. But it gets a lot more complicated when consumers need to make conscientious choices about which devices they should own due to the services they need to consume. This is the unfortunate side effect of what happens when you decouple subscription TV from the broadcast medium, and everyone is now a cord-cutter whether they like it or not.

Let's take this entire HBO Max thing, which AT&T owns, following their acquisition of Time Warner, and appears to be a key battleground point. HBO Max has many shows I enjoy watching, like all the DC Comics stuff like Doom Patrol and the new Ridley Scott Sci-Fi series Raised by Wolves. HBO Max is not part of Amazon's Fire TV devices (well, you can sideload it) or Roku, but both Google TV and Apple TV have it, as do many smart TV platforms such as Samsung. If you're an AT&T broadband or wireless customer, depending on your spending (and how you bundle), you might be getting that service for free, as I do, so you want to be able to take advantage of it.

On the flip side, you have Apple TV Plus, which runs on the Apple TV set-top, as well as Roku, Amazon Fire, and many Smart TVs. Apple TV Plus is only starting to get some shows that I feel are high-quality, such as the Israeli spy thriller Tehran, and the upcoming Sci-Fi series Foundation and season 2 of the alternate-history NASA epic For All Mankind.

Of course, Apple is doing services bundling now, which makes the prices of these streaming services, such as CBS and Showtime, more attractive. It costs only $9.99 a month to get them both -- but then you have to watch them through the Apple TV app to do that. I took them up on that offer, and currently, I'm using a Roku and a Fire TV to watch that content in my living room and my bedroom. I haven't determined how to sign onto them if I were to use a Google TV. I suppose I am about to find out. Disney is playing a similar bundle game with Hulu and ESPN.

None of this even considers the ecosystem services bundles like Apple One, which launches soon, and whatever Google decides to do with Google One to compete with it. And you can bet Amazon will be retaliating with bundling and beefing up Prime benefits.

In any case, I'm fed up personally with having to figure out which streaming box gives me all the services I want to use. It wasn't this problematic back when we consumed everything with a cable TV box and had DVRs. Arguably, some of us paid a lot more for the privilege, but at least everything just plain worked.

Who are you backing in the war of your living room? Talk Back and Let Me Know.