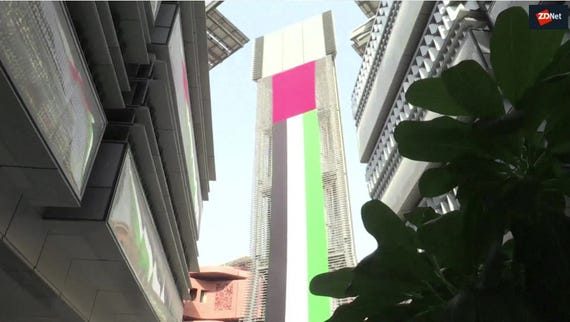 What are smart cities?

There's no standard definition, but the concept of smart -- or smarter -- cities has data and ICT at its core. Back in 2009, IBM described a smarter city as one "that makes optimal use of all the interconnected information available today to better understand and control its operations and optimize the use of limited resources".

Three years later, Cisco highlighted how "intractable challenges" for cities and communities -- such as bigger populations, climate change and budgetary constraints -- could all be addressed through ICT "to increase efficiencies, reduce costs, and enhance quality of life".

Governments in the Middle East are actively spending in this area, Gartner's Moutusi Dey Sau told ZDNet last year, as IT budgets become increasingly "focused on industries beyond the oil industry."

Why are Gulf nations investing in smart cities?

The drivers for investing in smart cities across the Gulf region are multiple; and include the need to support rapidly growing populations, income diversification and a desire to showcase the capabilities of the region to the rest of the world.

Qatar and Dubai will soon be hosting two major global events: the 2022 FIFA World Cup and the 2020 World Expo. Both feature eye-catching smart technologies -- ranging from air conditioned sports stadiums to driverless cars -- as part of a tech-led vision and legacy.

More pressingly, Middle Eastern governments also recognize the role that smart cities can play in responding to the dramatic population growth they have witnessed over the past few decades.

Predominantly swollen by expatriate workers, Qatar's population jumped from 1.2 million in 2007 to 2.3 million in 2017 with most people based in the capital, Doha. At the start of the millennium, the population was under 600,000. Similarly, the number of inhabitants in nearby Kuwait has doubled to over four million since 2000, with Bahrain seeing similar levels of growth.

Managing the implications of these increases, especially against a backdrop of 'oil shock' and the necessity of reducing dependency on petro-chemical based revenues, has also helped to drive smart city investments.

As a result, Middle Eastern leaders have been busy upgrading and rolling out new tools, services and infrastructure to meet their rapidly evolving B2C, B2B, transportation, water-management and urban-planning needs.

Initiatives, such as Saudi Arabia's new 2030 vision and Dubai Plan 2021, typically stress how a multi-stakeholder approach is essential if these aspirations are to be realized.

Businesses, entrepreneurs and universities are all being encouraged to work with government agencies towards ambitious national goals.

Notable examples in the field include the 2015 launch of the Center of Excellence in Smart, Sustainable and Entrepreneurial Cities by Abu Dhabi University, and the recent creation of the Global Blockchain Council.

The Global Blockchain Council is part of an ambition to make Dubai the first blockchain-powered government in the world, and features 32 members from global IT firms such as SAP and Microsoft, to leading local startups like Careem and Souq.com, as well as government entities and major UAE banks.

International companies, ranging from Siemens and Accenture to GE and Dell EMC are actively championing the role they can play -- and are playing -- in this arena.

As Microsoft's regional president Samer Abu Ltaif told ZDNet earlier this year, "with cloud computing and security at our core, we're also focusing on assisting in the development of smart cities to help uplift communities and transform enterprise and public-sector efficiency".

Why is this a region to watch?

With no shortage of ambition, smart technologies and innovations can already be seen across much of the Arabian Gulf.

UAE, with household penetration for fiber to the home at 93.7 percent, continues to be the global leader for FTTH, ahead of Qatar, Singapore, South Korea, Hong Kong and Japan. Telco Etisalat has already invested more than 28 billion dirhams ($7.6bn) in fiber infrastructure.

The government of Abu Dhabi with its Masdar City initiative and the new Qatari city of Lusail, are both being built from scratch at smart cities, while Oman recently hosted its first Smart City summit, where the Information Technology Authority (ITA) committed to producing a 2030 strategy to support smart cities by the end of the year.

Meanwhile local startups, such as Careem and Fetchr, and the graduates from regional startup accelerators, like Flat6Labs, are driving innovation and creating new business opportunities, and there are exciting experiments with drones and 3D printing taking place too.

At all levels, there's a lot of activity going on.

What challenges need to be overcome?

Despite this progress, vision and energy, the region's smart city efforts still need to tackle some significant hurdles.

For entrepreneurs, red tape and the ability to attract investment remain key concerns, although progress in these areas is being made.

Digital literacy, among consumers and business, is another key consideration. Despite some of the highest smartphone penetration in the world, and the widespread availability of m-government, e-commerce and cloud services, these technologies often remain underutilized.

Reasons for this reluctance include security fears, lack of knowledge, and a continued preference, especially among many Arab nationals, for face-to-face interaction.

Efforts to address these considerations are in place, but arguably more must be done.

And, of course, for governments themselves, the new-normal of lower levels of oil income, means that there's less money to spend on expensive infrastructural projects and training, as nations across the region become knowledge-based economies.

"With the increase of digitization, vulnerability increases. The region has ambitious plans to have smart cities and leverage IoT. In such situations, the digital and physical worlds are converging, and the impact of cybersecurity goes beyond access to information. It can target facilities, homes, cars," he said.

Is this level of engagement sustainable?

A key driver for Smart Cities has been, and will continue to be, population growth.

In 2007, a United Nations report, which featured camel riders approaching the cityscape of Cairo from across the desert on its front cover, reported how from 2008 more than half of the world's 3.3 billion population will be living in urban areas.

"By 2030," the report's authors noted, "this is expected to swell to almost five billion," with the urban population of Africa and Asia -- a classification which includes the Arab World -- expected to double in less than a generation.

This growth means the trend lines we've seen in the Gulf region over the past decade, in terms of the demand to create smart cities and the commitment of different stakeholders to making this a reality, are only set to continue.

Providing the right environment for business, citizens and government to flourish is fundamental to the smart city philosophy. Making this happen is not easy, and the region still has work to do, but at the same time, it's clearly making progress towards a smarter future.

The Middle East is pouring millions into cybersecurity, but throwing money at the problem may not be enough.

The large hole left in Gulf state finances by plunging oil revenues will have to be plugged somehow, and Saudi Arabia believes technology is part of the answer.

Join Discussion for: Guide to smart cities in the Arabian Gulf:...