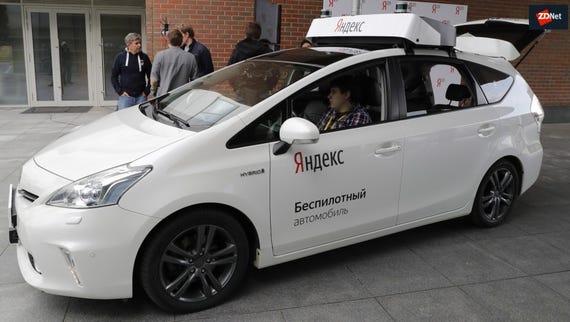 Russian technology giant Yandex has begun to test self-driving taxis in Innopolis, a small town built a few years ago to foster education in technology and entrepreneurship.

Yandex describes the tests in a blogpost as the first autonomous ride-hailing service in Europe.

About 100 residents have already signed up for the pilot scheme, with the first rides in two vehicles taking place this week.

At the moment, passengers who hail a taxi can travel free of charge between five standard locations in Innopolis, including the university, a local business center, and a residential area.

The average ride is just over 2km or 1.25 miles. The two autonomous cars, Toyota Prius models equipped with Yandex technology, detect objects around them with centimeter precision and compare them against preloaded maps.

Yandex told ZDNet that its taxis run in all weather and traffic conditions. However, for the time being they will have a safety engineer in the passenger seat.

Yandex said the autonomous ride-hailing service is a natural step forward for the company. The Russian internet giant has already tested its cars on the busy streets of Moscow, and has also offered passenger rides aboard its autonomous vehicles on test tracks.

The Russian engineers plan to use the feedback they receive from passengers to develop their autonomous technology.

They also want to expand the Innopolis project, to include more pick-up locations and additional vehicles. At some point, Yandex taxis will operate without a safety engineer in the passenger seat.

"[W]e plan to move from testing to the commercial phase as soon as legislation allows us to do so," Fokin said. "In the future, we plan to provide a full-scale autonomous ride-hailing service in other cities in Russia."

Yandex's Innopolis project comes at a time when several technology companies are stepping up their efforts in the autonomous car business. In June, Waymo's CEO John Krafcik said his company might bring ride-hailing services to the European market.

Uber, which combined operations with Yandex last year in more than a hundred cities in Russia and neighboring countries, has recently partnered with Toyota. The car maker has invested $500m in bringing on-demand autonomous ride-hailing services to the market.

Self-driving cars: This robot driver cruises through snow and ice

Finnish researchers have been testing a winter-proof autonomous car on public roads.

How do autonomous vehicles learn to drive? Download this self-driving dataset and see for yourself

Nuro, the self-driving delivery vehicle, is starting a pilot delivery program with Kroger in Scottsdale, AZ.

Like DeepMind and OpenAI, Wayve's new autonomous vehicle learns to drive using "reinforcement learning" to stay within a lane.

Join Discussion for: Hail an autonomous taxi: Yandex rolls out...