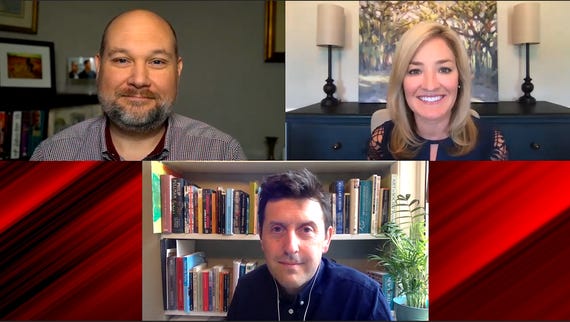 Returning to work after COVID-19: What employers should consider
Watch Now

Israel's tech sector has long punched above its weight. Although only home to a population of about nine million people, Israel is set to become a 2020s tech powerhouse.

As ZDNet has previously noted, some of the factors shaping that growth include a high level of investment in R&D – 4.6% of GDP in 2017 – and among the highest per-capita indicators for venture capital and startups in the world.

"In 2016 alone," Deloitte reports, "Israeli startups raised a record $4.8bn from investors, while high-tech and startup companies were sold for $10.02bn through acquisitions or IPOs."

Alongside this level of investment, compulsory military service introduces many young people in Israel to technology, developing skills and tools that often cross over into civilian uses.

Here are three Israeli tech companies that have adapted to the COVID crisis and confronted some of the key challenges the pandemic has presented.

The city, a center of ultra-Orthodox Judaism and home to 220,000 people, was one of the hardest hit locations for the virus in Israel, with over 2,000 infections.

As the New York Times explained, "The very customs that have protected its venerable traditions from change – strict limits on modern technology, an aversion to secular media, a deep suspicion of state institutions – had deafened Bnei Brak's residents to urgent public health warnings."

Alongside this issue, the city has a population density three times that of Manhattan, further exacerbating the challenge of getting an outbreak under control.

In response to the pandemic, the city went into lockdown and began to look at how tech might help aid the crisis.

"The situation we faced in Bnei Brak was very unusual, as we needed to implement high-tech solutions in a city whose population rejects technology," noted Tal Bar Or, CEO of Octopus Systems.

SEE: How hackers could spy on satellite internet traffic with just $300 of home TV equipment

Octopus initially deployed 500 cameras throughout the city, alongside drones and observation balloons, which fed into its command-and-control system.

Its platform was also used as a central management system for 16,500 cases of food delivered each day, as part of 1,600 daily "missions" undertaken by frontline workers.

As the city emerged from lockdown, Octopus used QR technology to enable businesses to reopen. Using a camera placed at the entrance of their office, employees scanned a personal QR code, enabling the camera to detect their temperature. If that's above normal, then the employee would be denied entry to the building.

In September, it was announced that the company would be rolling out its technology to support employee and visitor screening at businesses and schools in the USA.

Another company harnessing its tech beyond Israel's borders, Zebra-Med has partnered with the Apollo Hospitals Group in India to deploy AI in the battle against COVID-19.

The deep-learning medical imaging analytics company developed an algorithm that detects potential COVID-19 symptoms and impacts such as pneumonia on standard chest CT scans. Used in this way, the tool can be used to both track the impact of the disease and also to act as an early-warning system for its identification.

"Deciding which suspected COVID-19 patients should be hospitalized is challenging when healthcare systems are overwhelmed. The vast majority of COVID-19 patients are mild, so having this automated tool has helped make critical decisions on whether to hospitalize," says Dr. Sreenivasa Raju K, CEO and medical director at Apollo Radiology International.

Senior product manager Keren Nachmias wrote that Zebra Medical was grateful for the opportunity to see its first AI COVID-19 system installed in a developing country.

"This integration is just the first step in saving lives worldwide. It's not just a valuable solution, but rather a product that provides value during one of the most chaotic and uncertain periods in the past century."

Located in Haifa, the third-largest city in Israel, Sonarax Technologies is pioneering a proprietary ultrasonic data-over-sound protocol to provide a contact-tracing platform for businesses.

Using the microphones and the speakers built into smartphones, its Sonar-XE product uses ultrasonic sound waves to detect the distance between employees, alerting them when social-distancing protocols are breached.

"If the distance between nearby users becomes unsafe, the Sonar-XE application will immediately alert the user in real time".

The data can also be used in the event of an employee being known to have contracted the coronavirus. According to the company, its machine-to-machine communications protocol is more accurate than Bluetooth, a technology more commonly being used for track and trace.

SEE: Back in business: How pubs, gyms and holiday parks have been preparing to welcome back guests

Founded back in 2013, the company has historically emphasized how its tech "enables industrial IoT applications in environments where RF is either dangerous or unworkable due to interference".

Sonarax is "not there to compete with Wi-Fi, Bluetooth, and NFC," but to complement them, CEO Benny Saban told The Times of Israel last year.

Before the coronavirus, Sonarax had been used for indoor mapping, as well as tasks including mobile payments, authentication and IoT connectivity.

Its touchless technology, which can be used for a range of purposes, has not only evolved to meet the needs of the coronavirus but it also potentially helps to future-proof it too, as we adapt our digital behaviors to meet the increasingly contactless realities of a COVID-19 world.

"Technology has a critical role to play in responding to the [COVID] crisis," writes Merav Yachin, a Tel Aviv-based tech and innovation adviser at the Tony Blair Institute for Global Change.

In a mini-report featuring 55 examples of how Israeli tech companies are responding to COVID-19, Yachin demonstrates the breadth of engagement from this sector with the crisis.

"From symptom detection and diagnosis, patient tracking, contamination prevention and protecting medical staff, to wellbeing for the homebound and technologies to help businesses get back to work, Israeli technology companies and initiatives are offering local and global solutions that are already making an impact," she says.

Many of these companies, only one of which – Sonorax – is mentioned here, are taking their innovations into global markets, demonstrating how Israel's path to becoming a global tech powerhouse is already well underway.

Join Discussion for: Here's how three Israeli tech companies are...