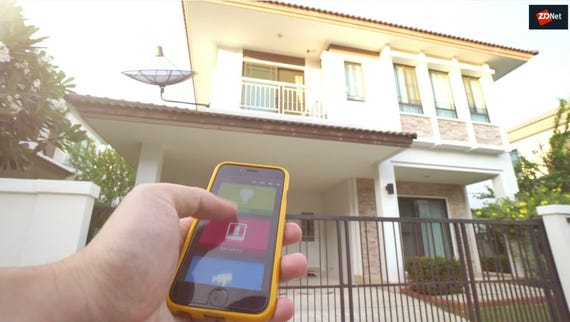 There are plenty of smart home devices that can help you measure and control what's happening around the house, but sometimes working out what to do with that information can be harder.

Smart home company Hive, an offshoot of British Gas, thinks that combining smart gadgets with services like having an engineer come to fix your problems might be a way to make the smart home useful, too.

British Gas started out with a product called Remote Heating Control that allowed users to control their central heating from their smartphone. This morphed into Hive Active Heating in late 2013, and since then Hive has become a separate business unit -- Centrica Connected Home.

Best known for its smart thermostat, Hive now offers a range of smart home devices ranging from motion sensors and smart plugs to a video camera, launched in July, which allows customers to keep an eye on their homes from afar.

"Connected home and our Hive offering sits as part of a broader Centrica offering including repair and maintenance services, which solves the problem of 'don't just tell me I've got a leak or a broken down boiler, help me do something about it'," Nina Bhatia the MD of Centrica Connected Home told ZDNet on a visit to the company's offices -- which look more like those of a hipster startup than a business unit of a utilities giant.

"Customers seek ease of use, affordability and support when something goes wrong, and those are things that I think are largely missing from the category. So those are the three things we are focusing on," Bhatia said.

Hive is growing its customer base: according to Centrica's 2017 interim results, the company has now installed 660,000 connected hubs (up considerably from last year when it had 364,000 hubs installed), including 30,000 in North America, and has sold over one million connected-home products in total.

The company aims to have one million hubs installed, and 1.5m smart home devices sold, by the end of the year. Plans include £500m investment in its smart home business through to 2020, with further international expansion on the cards.

Part of that £500m was used to buy the platform that the various Hive devices use to communicate, which is built on the £44m acquisition of AlertMe by British Gas in 2015 (it already owned 21 percent of the company).

"AlertMe was an acquisition which changed the trajectory of the business",said Sudeep Maitra, Centrica Connected Home global VP of strategy and development. "It made us a very credible player in the connected home space because we had not just a device -- we had a whole platform, we had some data analytics sitting behind it and we also had a whole other bunch of devices we took to market. We went outside energy we went to lighting, motion detectors, plugs and all of that, and we've continued building up that," he added.

For Centrica, one benefit of running a smart home service is that customers buying into something like Hive tend to stick around longer. That's handy in an energy market where customers are increasingly willing to switch suppliers to find a good deal. Adding a bit of hi-tech glamour in an often-complained-about industry can't hurt, either.

Still, while Centrica describes Connected Home is one of its growth areas, with offers primarily focused on the strategic pillars of peace of mind, home energy management and home automation, it's growing from a very small base.

Connected home revenue increased by 33 percent compared to the first half of 2016, but at £16m it's tiny compared to Centrica's total revenue of £14.3bn.

Hive is hardly alone in trying to grab a chunk of the smart home market, and is going up against some of the biggest names in tech. Google not only has its Home speaker, but also the Nest thermostat, while Amazon's Echo is rapidly becoming the main interface between consumers and their smart home. Samsung also has a smart home portfolio and Apple's HomePod is on the way too.

"This is a space where we have to be prepared to compete with, partner with, use as channels of trade, people who are playing multiple roles in the ecosystem," said Bhatia -- Hive's services works with both Google Home and Amazon's Echo, for example.

"There are places where the voice command as an additional interface is very powerful, so we are very happy to integrate it. It doesn't mean that people necessarily use the other interfaces less, you just use them at different points," she stressed.

Hive is also coming at the smart home from a slightly different angle to these US tech giants. Amazon wants to use devices like the Echo to sell you music subscriptions or to encourage you to buy more stuff. Google wants to know more about you so it can target advertising to you ever more effectively.

A gateway to services

Hive's niche is selling its own smart home products, but also using that to sell through its big services business -- those British Gas engineers and Dyno plumbers that are also part of Centrica.

The company has also been building packages of services around these products; for example, it has been using sensors to spot faults in customers' boilers before they stop working, and is extending the idea further.

The company intends to launch its Hive Leak Sensor and Hive Active Hub later this year: the leak sensor monitors water flow in the home, while the Active Hub features an intelligent audio sensor that can monitor the home for significant sounds. The company said these devices will enable future services, such as alerting customers to a potential leak or a smoke alarm going off.

Earlier this month Hive launched its latest feature for subscribers -- 'Mimic mode', which turns smart lights on around the house to make it look occupied while you're out or on holiday. The service also varies timings automatically, giving lights a different pattern each night for greater realism. Centrica says it now has 52,000 active subscriptions -- 36,000 for the Boiler IQ service that remotely diagnoses boiler faults and 16,000 Hive subscriptions.

These services may prove compelling for consumers who are less excited by the technology itself, and more interested how it can make their homes secure or easier to maintain.

Join Discussion for: ​Hive thinks it knows how to get the smart...