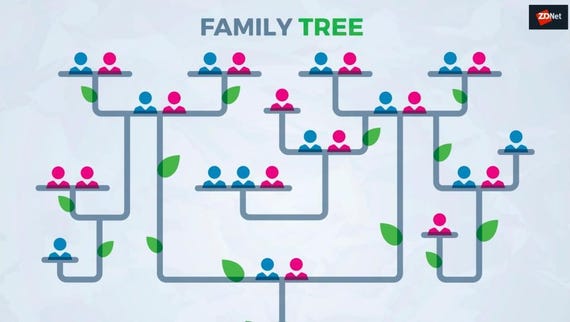 Doing a home DNA test? The FBI might end up with your family tree
Watch Now

Home DNA and ancestry service FamilyTreeDNA is now attempting to entice users of these services to freely give away their DNA profiles for law enforcement.

A television advertisement, which can be watched here, is due to air in San Diego first -- and then who knows which cities.

The advert asks users of any DNA testing and family tracking service to upload their profiles and a copy of their record to FamilyTreeDNA. The hook and enticement is the unfortunate families of murder victims or violent crime waiting for a suspect to be identified or prosecution to take place.

"If you are one of the millions of people that have participated in a home DNA test, your help can provide the missing link," the advert promises. "You don't have to buy anything, just participate."

The advert appears to fly in the face of recent criticism levied against the company. In January, Buzzfeed revealed that FamilyTreeDNA voluntarily allowed the FBI access to its database during criminal investigations, an agreement which was not made clear to its users.

The emergence of home DNA kits represents a myriad of issues. Many of us are interested in our family trees and may wish to know more about where our lines originated, but in turn, users are then willingly handing over very private information to a third-party.

DNA identification has allowed law enforcement agencies to solve old cases and mysteries, as well as provide solid evidence connecting suspects to a crime scene in some investigations.

Cold cases, such as a murder which took place years ago in the USA, was solved through DNA obtained by a testing kit firm through a cousin twice-removed. A relative of a man dubbed China's "Jack the Ripper" was arrested for the murder of 11 women and girls after a relative was swabbed after being arrested for a minor crime.

See also: Before taking that DNA test: Six things you need to know

Matching DNA profiles to suspects through family ties can only be a boon for law enforcement, but merging private DNA-grabbing companies with the police also sets a dangerous precedent.

FamilyTreeDNA said that the FBI is granted access on a case-by-case basis. The company said in January that "if law enforcement created accounts, with the same level of access to the database as the standard FamilyTreeDNA user, they would not be violating user privacy and confidentiality."

However, in response to the backlash, in which some users cited feeling "violated," FamilyTreeDNA tweaked the rules, saying in a statement:

"Users now have the ability to opt out of matching with DNA relatives whose accounts are flagged as being created to identify the remains of a deceased individual or a perpetrator of a homicide or sexual assault, also referred to as Law Enforcement Matching (LEM)."

EU users, thanks to the General Data Protection Regulation (GDPR), are automatically opted-out.

FamilyTreeDNA is in the DNA business. The company generates a profit through this information but now is well-known for its cordial connection to law enforcement.

Tugging at the heartstrings to prompt even more individuals into handing over the basic blocks of what we are is, no doubt, a small spark of marketing genius, but also has serious ramifications.

FamilyTreeDNA may wax eloquent over crowdsourced crime solving made possible through genealogy, but the moment you hand over that profile, you are not only involving yourself but anyone else in your biological family tree.

Other companies, such as 23andMe, have at least made some attempt at regulation and transparency and demand a subpoena before releasing profiles to law enforcement, as well as use "practical legal and administrative resources to resist such requests."

The novelty of finding out more about your family through genealogy is still fresh and new. The more of us who submit to the temptation, the more our genetic family links are connected by companies that are there to turn a profit, rather than launch a moral crusade.

CNET: What AncestryDNA taught me about DNA, privacy and the complex world of genetic testing

DNA profiles are not only about your consent, but your father, mother, siblings, cousins, uncles and aunts, and more. There is no informed consent at play for each party involved and you should think twice about willingly participating.

It might be private companies currently dictating how our DNA data is used and shared, but the further along this industry trend goes, the more at risk we are of such profiling spilling out into the government space and becoming commonplace.

Perhaps one day, a DNA profile will become as much of a requirement as your birth certificate in society.

Join Discussion for: Home DNA kit company asks you to upload your...