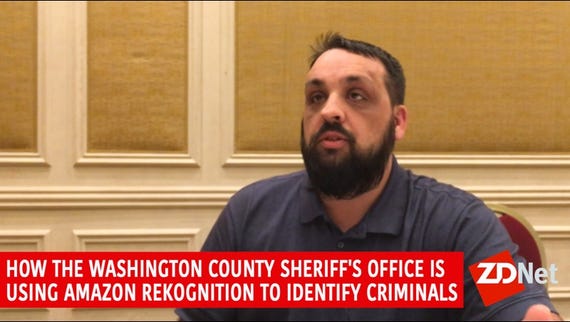 When looking for a person of interest, officers from Washington County Sheriff's Office previously would have to send out emails with bulletins that included pictures of those whose identity was unknown, which would place a heavy reliance on people within the officer's contact list recognising those people of interest.

The problem with this method was that if they did receive a response, it was quite a long turnaround, and as a result, the Sheriff's Office was missing out on possible leads.

Chris Adzima, senior information systems analyst at the Washington County Sheriff's Office, looked for a quicker and better way to identify unknown suspects, telling the AWS re:Invent conference in Las Vegas on Tuesday that he was keen to explore the use of machine learning.

"We thought, what if we could find a way to use machine learning to identify people, and so around the same time, Amazon announced Rekognition and I decided to make a test of it," Adzima explained.

He uploaded around 300,000 mugshot images into the S3 cloud and indexed them with Rekognition.

"It allowed me to run the search imaging API and return results in seconds," he said.

The Washington County Sheriff's Office had the opportunity pretty early on in the life of the project to test the capability on a real-life scenario.

Officers were confronted with a shoplifter who walked up to the self-serve checkout of a supermarket and loaded goods not paid for into his pockets. Still images from the checkout were cross-checked with those already in their database, and within seconds an image was returned.

Adzima said officers then looked that person up -- as the images didn't initially appear to match 100 percent -- and the law breaker in question had a photo of him dressed in the same attire as his security camera still uploaded to Facebook, in public view.

The officers were able to approach the perpetrator with a high-level of certainty that he was in fact the shoplifter caught on camera.

It isn't just surveillance footage that the officers are using Rekognition on, with Adzima noting the service can be used on artist renditions.

"It was something we didn't even think about when we first started this project," he said.

But it does work, providing the library contains the image.

"We want to start integrating with other agencies. Right now, the booking photos we have are our booking photos, but we want to be able to reach out to neighbouring agencies because criminals don't abide by county lines," he said.

The Sheriff's Office has also kicked off a Help me Home initiative, which is aimed at helping elderly, minors, or those not always capable of making their own way home when out and about.

If somebody is approached by an officer but is unable to say who they are, Adzima is modifying the capability to allow the tool to perform a search, which returns information such as name, address, and contact person, which would allow the officer to help them home safely.

"That is the next thing I want to do to keep our community safe and help more people," Adzima said. "While identifying criminals is fun and all, this is the stuff that really helps people."

Amazon to put machine learning into the hands of more users

AWS CEO Andy Jassy believes machine learning is still too complicated for everyday developers, so his company has launched AWS SageMaker to make it more accessible

AWS not buying into the blockchain hype

In announcing over 20 new features during his day one keynote at AWS re:Invent, CEO Andy Jassy's blockchain omission was deliberate, as he's not interested in focusing on the technology that is currently caught up in so much industry hype.

Amazon offers robust AI and machine learning capabilities with AWS. Find out how Amazon AI compares to similar offerings from Google and Microsoft.

Join Discussion for: How one Sheriff's Office is using machine...