Full Bio
Posted in Between the Lines on December 7, 2016 | Topic: Smart Cities

The future of the U.S. Postal Service (USPS) could be as the eyes, ears and sensor network for the smart city. If cities played along the USPS could also derive a revenue stream that reverses billions of dollars of annual losses.

According to a panel at the Smart Cities Summit in Boston, the future of the USPS may revolve around big data, Internet of things and smart cities.

Here's the gist of how the USPS could be a smart city enabler:

Kristin Seaver, chief information officer of the USPS, said the possibilities are endless, but there are a lot of issues to sort out. "Conceptually, we would have to identify what we could and would do," said Seaver.

The idea that the Internet of things and big data can revamp the USPS, which has 500,000 employees, is well timed. After all, from fiscal years 2013 to 2015, the USPS had a net loss of $15.5 billion. For fiscal 2016, the preliminary net loss is $5.6 billion. In addition, the USPS has hit its Treasury borrowing limit. The service needs a strategic plan for services that don't make money and is restricted by law to expand into non-postal businesses.

Jessica Raines, public policy analyst at the USPS' inspector general office, has recently published research on the partnering possibilities for the USPS and smart cities. Raines group looks into new technologies such as blockchain, drones and IoT and how they could apply to the USPS.

"There is a lot of potential in smart cities for the USPS," said Raines. "Think of how many assets, infrastructure and people we have."

The USPS report on smart cities proposed potential pilots for monitoring pavement, bridge and water conditions. Here's a graphic highlighting how a smart city and USPS collaboration would work in the field.

Given the possibilities, the USPS and smart cities would be wise to start collaborating. The Postal Service could be a ready-made partner for smart cities. Christoph Mertz, principal project scientist at Carnegie Mellon University's Robotics Institute, said smartphones and sensors could be easily equipped to fix potholes before they even start. "The Postal Service could map the city every day with its fleet of vehicles," said Mertz.

Hae Young Noh, assistant professor in Carnegie Mellon University's civil and environmental engineering department, said there are already sensor projects revolving around public infrastructure. For instance, Noh has three years of data from sensors on trains in Pittsburgh. The USPS could be similar. 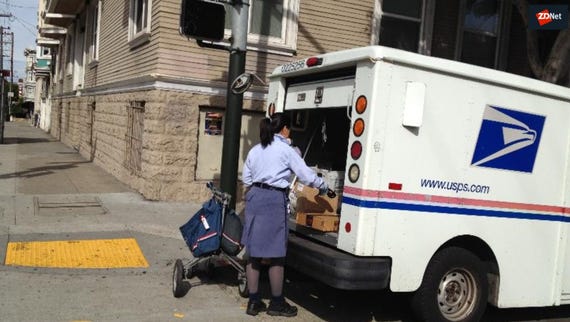 The Postal Service and cities: A 'smart' partnership?
Watch Now

"Vehicles could be used as the general sensing platform to collect information on the city. The USPS could provide a real would platform that's easy to track," she said. "The Postal Service could be way beyond a delivery service."

Seaver was into the idea of the USPS working more with smart cities, but she said interoperability between regions, technologies and data flow would all have to be sorted. "Once we get through the excitement, the primary discussion has to be around our mission," said Seaver.

For starters, Seaver said she'd want to figure out what technologies could be leveraged with smart cities and then enable city postmasters to have those discussions in their area.

According to the Postal Service Inspector General report on smart cities:

Smart city services could also represent a new source of revenue. Because these efforts are in the very early stages of development, it is too early to say whether these services will be a significant or even a consistent new line of business. Posts are looking at several business models for smart city participation, with different levels of involvement. As the level of effort and involvement by the post increases, the potential revenue opportunity also increases (as do the risks).

Data would be another issue. The USPS already collects a lot of information, but their systems are closed for the most part. What data could be passed through and what's the benefit?

Seaver also said that it may be possible that the USPS partners with a technology giant on a smart city platform.

And finally, there are those regulatory restrictions on what the USPS can do. Becoming a sensor network for smart cities would be a new business that would require approval.

There's little doubt that the USPS and cities could combine forces to share data and enable services. But as Seaver noted, things are never as simple as they seem.

Join Discussion for: How the U.S. Postal Service could enable...