Zoom may be the default tool for business, but how does it work for a sizable birthday party? I just found out.
Written by Chris Matyszczyk, Contributor on May 17, 2020 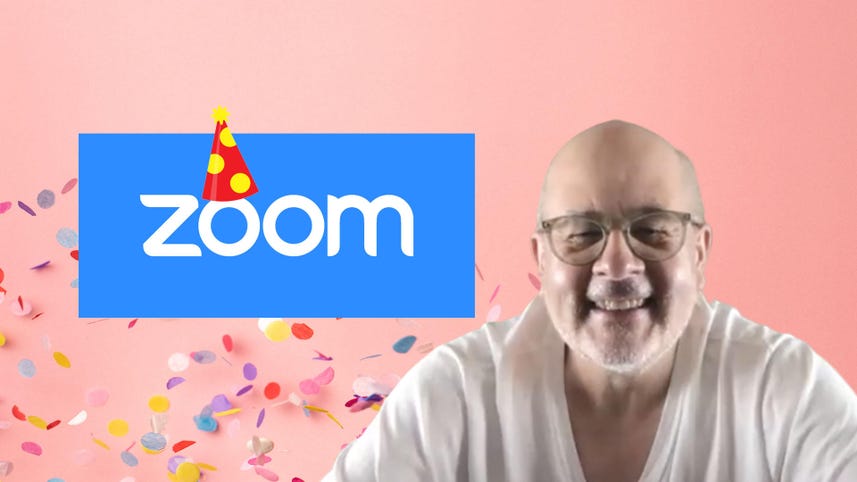 I'm not much of a party animal. Unless that animal is a skunk, a platypus or a koala.

I tend to find a corner, occupy it like some used to do with Wall Street and, if a lonely human drifts my way, I try to be polite.

It's rare, though, that exciting conversation ensues. It's less rare that the other person is slurring and severely dislikes their spouse.

But we're living a different life now, so when a birthday party invitation sloped into my inbox, my feelings bordered on excitement.

Then I had a coffee, fully opened my eyes and realized this was a birthday party enacted via Zoom.

Yes, we've all spent long hours on Zoom lately. Its creators insist it was only ever designed for business. How could it possibly be the party house for -- looks at the invitation -- fifty people?

This, I should explain, was a birthday party for my friend Kevin. Regular Technically Incorrect churchgoers might remember him as having a husband who regularly needs to mute him with the help of AirPods Pro.

Trying to get fifty people to simultaneously have a good time on Zoom is surely a far larger problem. How do you create a sense of party? How do you get people to mingle? And what about canapés?

More basically, when was the last time I was in the same room with fifty people?

When you arrive at any party, you stare at the faces, watch them stare back at you and then espy the nearest point of shelter.

This is usually a bar or a bedroom where you can toss your coat.

Here, though, you've nowhere to hide. You log on and you stare. Not everyone stares back at you because many don't actually know you're there.

The Zoom screen fits nine people snugly on an iPad screen. It took my wife and I a moment or several to realize that we had to scroll sideways in order to see everyone. In groups of nine, that is.

I looked and, other than the hosts, we knew no one. That's not usually a problem. You offer a smile or two as you move to find your corner. Here, though, you just stare until someone says something to you.

Finally, the hosts did. But a Zoom party isn't like a real one. There's only one conversation. And you either join in -- if you can squeeze a word through the ether -- or you stare and sip on your wine.

For me, then, it wasn't so different from a pre-Covid party. Except here, no one played dress-up. Well, except for the hosts and my wife, who put on a purple wig. (Please don't ask.)

Thankfully Kevin and his husband Donal had thought through some of the technology's limitations. So they'd organized the evening as if it was a variety show.

First, they introduced a comely drag queen who acted as host for the evening. She proceeded to take us through several rounds of bingo. Yes, she had a machine full of balls on her dining room table. And technology is clever enough to email everyone bingo cards.

The drag queen had to work very hard.

When people are at a party, their reactions are geared toward that. When people are at home, sitting on their sofas, in their kitchens and, at least in one case, on their porches, it's harder to get into the party spirit. Especially as, in practical terms, you can't speak easily unless you're spoken to. No wonder at least one attendee sat stroking their cat and looked entirely as if they were watching Monday night Netflix.

The Arrival Of The Fittest.

One of the joys -- should you be so inclined -- of a Zoom party is that it's much cheaper to fly in your entertainment from overseas.

Even more commendable, he was doing it in the hallway of his small apartment.

This really got the party started. Suddenly, the guests realized they could communicate with each other via chat.

Sample: "He is giving me life." Another sample: "This is his cardio workout."

Some sighed that they couldn't slip cash into his extremely tight shorts. But then technology came to the rescue. The dancer's Venmo details appeared on the chat and soon cash was shooting its way down under.

Personally, I spent half the time wondering what his neighbors must think. Especially as he began a truly exalted interpretation to Gloria Gaynor's "I Will Survive" and, at the appropriate lyric, he literally walked out the door.

He did turn around and come back, of course. Every artist knows when to stop for applause.

I focused on Kevin's mom and dad -- oh yes, they were there -- to see what they thought of the tight-shorted dancer. Mom seemed to like it.

Still, though, the smiles were those of the distant, rather than the present. The conversation couldn't really get going because the hosts wanted to include everyone. Which took quite a long time.

The (Good) Times, They Are A Changin'.

You want to hug people. You want to really look into their eyes and see how their faces move. You want to whisper to them and laugh with them, while you hear the echo of laughter from another conversation drift through the air.

There simply isn't a technology that can help you do that. We're forced to modify our behavior -- as so often happens -- to the available tech.

So we sit, smile, stare and occasionally try to project at least a little of ourselves.

Yes, partying has become a lot more like a business meeting.

In many ways, that's a good thing. We've partied too much in recent times and let the world drift into noxious airs and parlous waters.

But no one stayed late at Kevin's party. No one made a fool of themselves. No one said anything remotely ridiculous.

There's a certain pity in that.