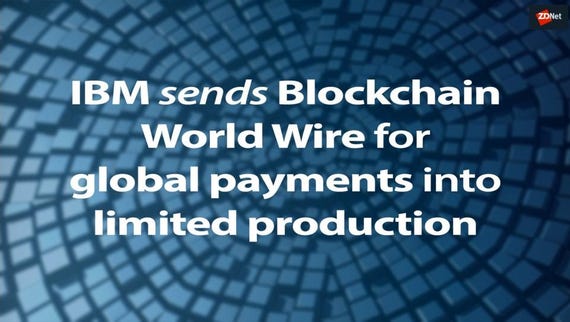 IBM has announced that its blockchain-based global payments network has been sent into limited production, with the company touting it as the "new financial rail" that clears and settles cross-border payments in near real-time.

"The concept of money is 2,000 years old. The world has been using the same network to process financial transactions for 50 years. And even though globalisation has changed the world, payment fees and other financial barriers remain the same. But now there's a new way to move money," the company pitches.

"We've created a new type of payment network designed to accelerate remittances and transform cross-border payments to facilitate the movement of money in countries that need it most," IBM Blockchain general manager Marie Wieck added.

The blockchain-based network will support settlement using Stellar Lumens (XLM) and the US dollar stable coin through IBM's existing partnership with Stronghold.

If successful, this will see the addition of the euro, Korean won, Brazilian real, Indonesian rupiah, and Philippine peso stable coins to the network.

According to IBM, World Wire has enabled payment locations in 72 countries, with 47 currencies and 44 banking endpoints.

"Local regulations will continue to guide activation, and IBM is actively growing the network with additional financial institutions globally," the company said.

The new service has been established in response to the enterprise's blockchain experiments.

The IBM Blockchain Platform is now running on the IBM Cloud in Melbourne, with a second platform to be created in Sydney soon.

Blockchain may be the answer to enforcing trust by combining AR and real-world location records.

TrustChain is a new initiative aiming to help customers determine whether gems and minerals have been ethically mined and manufactured.