At its latest event, Apple finally got around to remembering the Macintosh, or, at least, the MacBook Pro. There were no mentions made of an updated iMac, Mac mini, or Mac Pro. While the MacBook Air is still for sale by Apple, the writing is on the wall. In addition to the two showcase MacBook Pro models Apple announced, the company specifically introduced a third, new-but-nerfed, MacBook Pro model to replace the MacBook Air.

The contrast with the previous day's announcements by Microsoft was profound. Microsoft announced a new all-in-one desktop called the Surface Studio. It is everything I've always thought a desktop computer should be.

The Microsoft Surface Studio perfectly transforms from what is essentially the iMac form factor into a drawing table. There's a scroll wheel called the Surface Dial. You can use it on the side of the machine, or place it on the screen as a tactile control. You can, in drawing desk mode, draw on it. You can multi-touch on what will become an ideal modern drafting table.

Assuming it actually works reliably, the Surface Studio is breathtaking, brilliant, and the epitome of design perfection. Jony Ive just got p0wn3d.

Last week, I spoke about Microsoft's innovation in the Surface Book. This week, they upped their game with a more powerful version. The Surface Book is both a traditional laptop and a tablet, with the ability for the screen to detach and be turned into a tablet, until it rejoins the base. Microsoft has attempted this repeatedly over the years, but last year they finally got it right.

So what did Apple introduce? Apple. Remember them? The company that made its name on design and innovation has introduced a little video strip that replaces function keys. They also added Touch ID, and a slightly bigger trackpad. Plus the machines are slightly smaller, slightly lighter, and a year's worth of evolution faster.

They took away all the ports except for four Thunderbolt/USB-C ports (one of which must supply power) and (surprise, surprise), they left in a headphone jack.

Apple spent almost 45 minutes demonstrating the benefits of a second, tiny function key screen on the new MacBook Pro. It might prove helpful, but how many of us really need to have Word's styles on a glowing OLED panel where function keys used to be? Do we really need quick buttons for Photoshop's features? How innovative is a soft volume control?

Yawn. I'll probably place my order for one tomorrow.

As most of you know, I'm far from an Apple fanboy. I've also been pretty hard on Microsoft over the years. My Surface RT and Windows 8 columns were justifiably severe.

I use Macs now because my daily workflow includes both Mac and Windows applications. By running a Mac with Parallels, I can do all my work on one machine, and move objects between platforms with a mere drag and drop.

Late last spring, my wife's old Windows laptop died. Since we're running mostly Macs now, our choice was to either buy her a new-but-not-updated MacBook Pro or give her my purchased-the-previous-year MacBook Pro. Since it was well past time for Apple to introduce a new MacBook Pro model, we decided to hold off on purchasing a second 2015 MacBook Pro when I handed down mine to her.

Now that the new 2016 MacBook Pro has been announced, and ordering has opened up, I'm going to get one. But I'm not getting it because it's the most innovative or exciting design around. That honor goes to Microsoft. I'm simply getting the just-announced MacBook Pro because it runs my workflow, and I happen to be in need of a laptop.

Over the years, I wondered why Microsoft didn't step up its hardware game to include PCs. After all, the Xbox has been an unqualified home run. That question is no longer in my mind. Clearly, Microsoft has got game. Apple, despite what they said in their MacBook Pro launch event, doesn't seem to have the spark of innovation anymore, at least on the Mac platform.

Instead of insanely great, we're getting incremental improvements which are underwhelming and mundane. We all expect so much more from Apple. That's just sad. 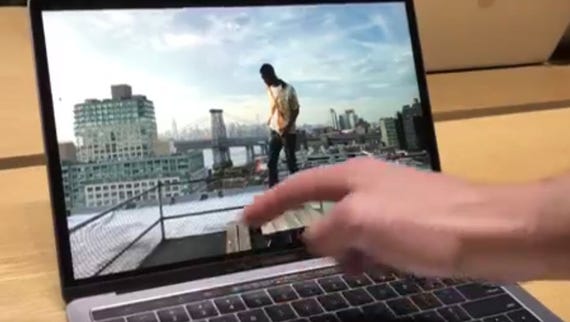 Join Discussion for: I'm buying a new MacBook Pro, but the Surface...