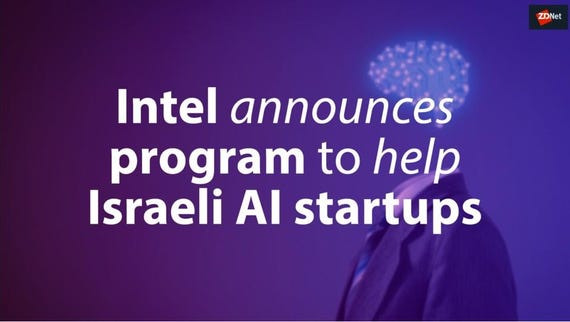 The program, called Ignite, will provide 10 to 15 startups with a 20-week business and technical mentorship from Intel and industry experts. Intel also added that it currently has no plans to seek equity or intellectual property rights from the startups taking part in the program, but it may do so in the future.

"Intel has always worked in concert with open ecosystems to scale new technologies so they can be transformational for our customers, business and society," Intel CEO Bob Swan said.

"Israel has the deep skill base in AI, autonomous systems, and the underlying technologies critical to these inflections that make it a natural choice to launch our Ignite program."

The startup program will be headed by Tzahi Weisfeld, former global head of Microsoft for Startups.

If the program is successful, Intel has plans to expand bring Ignite to other countries.

Since Intel acquired Israeli autonomous vehicle technology company Mobileye for $15.3 billion in 2017, the company has been making big pushes in developing AI and autonomous systems.

In January, Mobileye commenced autonomous vehicles trials on the streets of Jerusalem and also inked various deals to bring its autonomous capabilities to China's public transport system, have its safety system adopted by Chinese companies and standards bodies, and to deliver autonomous driving solutions to Great Wall Motors.

Intel is extending its autonomous driving trials in Israel to provide an entire mobility-as-a-service offering across car, software, platform, mapping, and safety mechanisms.

The new commute: How driverless cars, hyperloop, and drones will change our travel plans (TechRepublic)

How Mobileye is shaping the future of autonomous cars, as it signs up its third major automaker (TechRepublic)

Nissan has become the third big car company, following GM and VW, to use Mobileye's self-driving technology. Learn how its combination of cameras and maps are shaping the future of self-driving cars.