There were many products and services shown at today's "California Streaming" event, and many of them look like real winners. But nobody is perfect, not even Apple, and there were a few things that jumped out at me that immediately raised my eyebrows and gave me some pause.

The best MagSafe battery packs Apple's MagSafe tech has been integrated into removable batteries. These are your top choices.

Look, I don't know how else I can say this, but the entire charging situation across the product line is completely disjointed. The company had a real opportunity to consolidate at least across the magnetic/wireless charging portfolio, and they squandered it. How so, do you ask?

Let's start with the fact that the Apple Watch Series 7 has a new USB-C charging cable which enables it to charge 33% faster. That's great. But what is not so great is that this charging connector is still different or incompatible with the MagSafe standard introduced with iPhone 12 last year.

Apple could have made it so that iPhone 12/13 and Watch Series 7 and the next generation of iPods (which were not announced at this event) could charge from a single MagSafe cable.

In fact, a new MagSafe cable SKU was submitted to the FCC, but we don't know much about it yet. Maybe it does work with the AirPods 3; who knows. But that it doesn't appear to work with Watch Series 7 is a complete miss.

And why not put MagSafe on the entire iPad line? As we know, kids are rough as heck on electronics, especially on the iPad when used in an educational setting. You know, where they use all those Chromebooks that Apple threw shade on at this event. From that perspective, a MagSafe connector on the base iPad and the Mini makes a lot of sense.

USB-C Should not be an iPad Mini, Air, and Pro Exclusive

It is fantastic that the iPad Mini joins the iPad Air and iPad Pro with a USB-C connector. Not only does that make charging easier to deal with in many scenarios, but it opens up the possibility to a lot of new accessories, including hubs and external displays, etc.

But why only put it on the Mini? Why not iPhone 13 and iPhone 13 Pro/Max? Why are we holding on to the stupid legacy Lightning connector? Why not make the 13  or at least the 13 Pro/Max full Thunderbolt compatible, so they have ultra-fast transfer rates for all that pro video and photo content Apple made a big deal about? Why doesn't the lower-end $329 basic iPad now have USB-C?

So the iPad Mini now has TouchID, just like its big brother, the iPad Air, embedded into the side power button. That's great -- now most of the entire iPad line, except iPad Pro, has a quicker form of authentication that will come in handy when masked or when having to make electronic purchases. 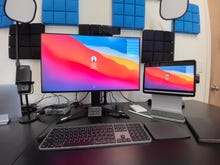 The best iPad accessories The top products include docks, hubs, and more.

But why stop at iPad Mini and iPad? What technical restriction stopped the company from putting it on the iPhone line this year? The device that more Apple customers use than any other is the one that needs this technology the most, especially in the age of COVID-19.

Look, I think FaceID is great, but it's not a foolproof technology given the difficulties we now face with wanting to transact in public using electronic purchases. Not all of us are comfortable taking our masks off to authenticate, and not all of us have an Apple Watch to assist in 2FA to unlock the device. Not only that, using the Watch as a mechanism for Apple Pay isn't always ideal for several reasons. Not every payment terminal is easily within arm's reach, and even if it is, maneuvering your wrist into position in some environments is more difficult than simply passing your iPhone near it, which has a stronger NFC transceiver.

Look, I understand why Apple differentiates the iPad and iPadOS from the iPhone and iOS from a use-case perspective. But there is zero reason why the iPad cannot make phone calls, especially if equipped with a 5G model. Perhaps Apple is using a different baseband chip that doesn't allow it to make phone calls or some screwy carrier agreement prevents this; who knows.

Regardless, it is an artificially imposed reason, not a technical one, and, it's still dumb.

Look, there may be a way around this by using a VOIP to telephone service (such as Google Voice) and getting a virtual phone number. But honestly, the 5G-equipped mini is ideal as a single device for a large segment of users who do not also need an iPhone.

It is, in fact, the very same segment of end-users that would otherwise buy something like an $1800 Samsung folding phone, since the screen real estate and use case is virtually identical, except that the iPad Mini is a hell of a lot cheaper.

Where else did Apple miss this year at its fall event? Talk Back and Let Me Know.

Join Discussion for: iPad Mini 6 is not a phone (and 3 more things...