It's not just the US using drones in the war on terror. The so-called Islamic State is now taking bombs to the skies.

According to The New York Times, Kurdish forces shot down a small hobby drone in northern Iraq, a stronghold for the terror group. When the forces examined the drone, it blew up. 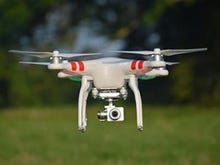 Homeland Security warns drones could be used as weapons

The agency warned local law enforcement of the emerging threat that drones pose.

While Islamic State fighters have long used hobby drones to conduct reconnaissance, last week's incident is thought to be the first "kamikaze"-style explosive drone attack by the Islamic State.

Two similar attacks last month prompted US commanders on the ground to warn of the dangers of flying drone bombs.

Off-the-shelf drones aren't powerful enough to carry much more than a small packet of explosives or a couple of grenades. But as drones become larger, more powerful, and are able to fly for longer distances, the dangers could become greater over time, said a report by West Point.

Last year, US Homeland Security warned that drones could be used "as part of an attack." The bulletin describing the scope of potential attacks did not mention a planned attack or cite any specific intelligence, however.