Top tech 2020: The two Jasons pick their favorite gear of the year

These are the tech products and innovations that most impressed Jason and Jason this year.
Written by Jason Perlow, Senior Technology Editor and  Jason Cipriani, Contributing Writer on Dec. 3, 2020 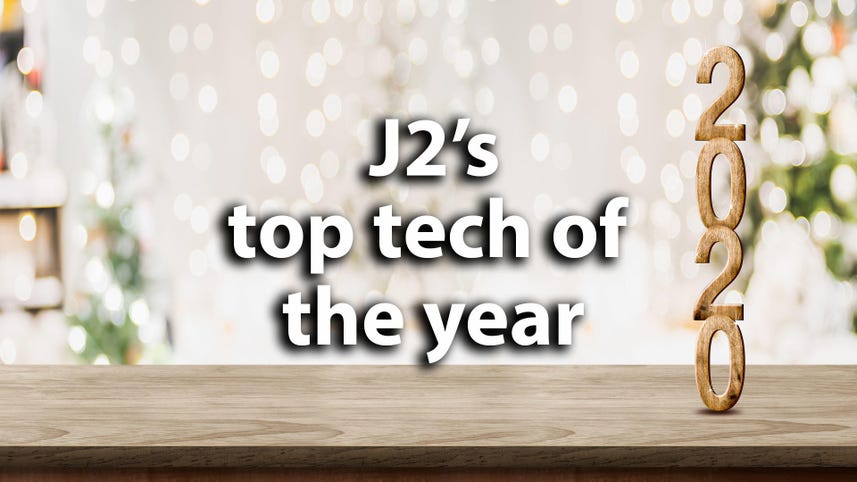 Our last show discussed the various companies and products that earned a Tech Turkey award, and there were some doozies. Now it's time to talk about what are, in our opinion, the top tech products or innovations in 2020.

Here are five products that stood out to Jason Cipriani and me this year.

Jason Cipriani: This is kind of like 5G, where not everyone or every device is going to be able to take advantage of it. I only started using Wi-Fi 6 in the last few weeks with the most recent Velop Mesh system. It's blown me away. For example, on the iPhone 12, it's not unheard of for me to get 700+ Mbps in speed tests. The problem right now is that most tech we have in our homes doesn't use Wi-Fi 6, so the incentive to go out and upgrade today isn't there. However, the availability of both Wi-Fi 6 devices and Wi-F i6 routers has significantly expanded this year and will have a big impact on the home office, remote learning, etc., over the next year.

Jason Perlow: The speed of Wi-Fi 6, which is also referred to as 802.11ax, is not the only significant advancement of the new high-speed wireless networking standard. It's also security, in the form of WPA3, which is a requirement of all Wi-Fi 6 equipment when they are certified. WPA3 is a major improvement over WPA2 in current routers because it uses a new authentication mechanism, known as SAE or Simultaneous Authentication of Equals to replace the PSK or Pre-Shared-Key in WPA2, which is a much more secure key exchange method. It makes it much more difficult for an attacker to record the session's encrypted transmission and then play it back offline to attempt to crack it. Some existing Wi-Fi5/802.11ac routers support WPA3 experimentally now, so if you can turn it on and you have products that support it, such as any iOS 13 or iOS 14, or any Android later than 10 or even Windows 10 2004, you can use that protocol.

Jason Cipriani: Perhaps a surprise entry, but I think the Fold 2 deserves a spot because Samsung took the original fold -- a device Samsung had to pull from stores a few days before launch -- reworked it, got it in good enough shape to release, and then kept iterating. At the time, I said it should have just canceled the phone, gone back to the drawing board, and tried again when the tech was ready. But Samsung proved me wrong, releasing the Z Fold 2 this year, with an improved experience overall. I think most of, if not all, reviews were very positive.

Foldable phones are indeed in our future, and Samsung is currently leading the way.

Jason Perlow: So I am not a folding phone user yet because these things are just too darned expensive right now. However, I think Samsung is making some critical innovations in the space. It looks like Samsung managed to address most of the previous model's issues, including any performance and usability compromises it had. It is making progress, and for that, it should be recognized.

Jason Cipriani: Google finally got TV right. A Chromecast device with an easy to understand UI and a remote for $50… enough said.

Jason Perlow: Look, to be honest, I was skeptical of Google being able to release a decent streaming set-top box, especially when you see how strong Roku, Amazon, and even Apple is in that space. Honestly, I wanted not to like it. But not only did I like it, I liked it even better than Amazon's comparable offering this year, which was slower, had less memory, just didn't have as slick an interface. So, now, I'm using it as my only streaming box in my living room. The only downside right now is the lack of Apple TV+ support, but I suspect that will be addressed at some point. The product is an excellent value for what it is if you are looking for a streaming device that supports just about all of the major services. And, as I discovered recently, you can even pair it with Bluetooth devices, such as headphones, so you don't wake up your family late at night when you're binging your favorite show.

Jason Cipriani: The way I review phones has changed a lot over the years, but that's because phones changed. There used to be a big focus on camera capabilities once phones started to get good enough to replace most point and shoot cameras. Then, the competition kind of leveled off, and it was almost a given that a camera on a flagship phone was going to impress. Each release is more impressive than the last, but only incrementally for those who look closely. With the 12 Pro Max, and to that extent, the 12 Pro, the camera is a giant leap forward. I took it out the other day to take photos for our Christmas cards, and I honestly don't think I'll ever take out my expensive camera again. It was much easier to hold up the phone, snap a couple of photos, and not have to think about adjusting ISO or shutter speed. Tap on the screen to change focus, hit the shutter button, and enjoy.

Jason Perlow: So, look, Apple has been ahead of the game with its iPhone cameras since last year's 11 Pro Max; it completely blew away anything Samsung or Google had. The only vendor it was on par or possibly even behind was Huawei, and frankly, it isn't even in the picture right now. So, it's safe to say, if you are someone where photography is paramount for you in a mobile device, the iPhone 12 Pro Max is your only logical choice. What the company is doing with its microprocessors and machine learning is astounding for computational photography. Which brings us to...

Jason Cipriani: Apple had a tremendous year. Seriously, we saw more innovation out of Apple this year than we have in the last couple of years -- possibly combined. The ability to pull off a processor switch, where the underlying architecture is entirely different, and making it almost seamless for developers still blows my mind.

I think about the approach Microsoft is taking with the Surface Pro X, easing into the ARM switch in public, through a beta… and then I look at what Apple did, making the entire transition behind closed doors and releasing it on day one, ready to go. Man, it's impressive. Everyone else in the computer industry is so far behind right now.

Jason Perlow: I don't know where to begin with how amazed I am by this thing. I hate to start playing Apple word bingo, but that chip is astounding and magical. Cupertino put a tremendous amount of resources into it. Apple was able to take a processor architecture that was once only reserved for low power, mobile devices, and smartphone-types of application workloads and transform it into the future of desktop computing.

Everyone needs to notice this because we all thought it would take a long time before Arm chips were on parity with Intel. We have seen with this hybrid SoC architecture from Apple a much more optimized chip for modern workloads. It is much more efficient with memory and power use and can run apps not only just as fast as Intel, but run them even faster depending on what they are and how the code is built. The open-source machine learning benchmarks on the chip using TensorFlow are off the scale, and even Arm Windows virtualized and emulated runs faster than what Microsoft's Surface Pro X can do with the Qualcomm SQ2 chip.

Hopefully, the success of the M1 encourages processor designers such as Nvidia, which now owns Arm, to create other Arm-based desktop-grade processors that are licensable. And, potentially, there are also RISC designs such as OpenPower and RISC-V that are open source that pave the way for future non-Intel chips in the datacenter or even on the desktop, too.

This year, our choice for the best Mac for the money is, without doubt, the 2020 M1 Mac Mini.