Top 10 Tech Turkeys 2020: The worst products and services of the (worst) year

Sure, the sheer horrors of 2020 far exceeded any possible technology blunders. But Jason Cipriani and I still have our terrible, horrible, no good, very bad picks to present. Brace yourself.
Written by Jason Perlow, Senior Contributing Writer on Dec. 31, 2020 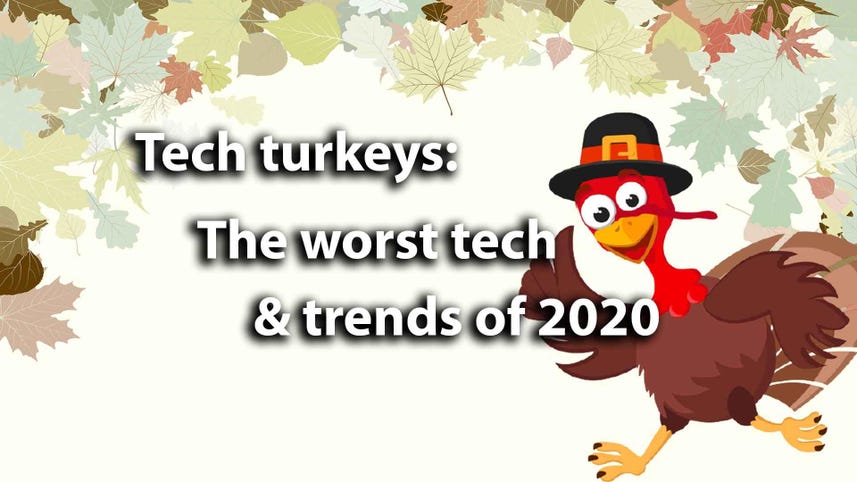 From COVID-19 to economic rollercoaster to election mayhem, 2020 is a year we'd all rather forget. But before we start looking ahead to a brighter and better 2021, and with Thanksgiving this week, it's time for Jason Cipriani and me to hand out our annual Tech Turkey awards. That is, tech products and services that didn't live up to their promise, overblown hype, or just flat out failed.

Last year, the two major social networks ranked as No. 2 on the Tech Turkey list for failing to limit how their respective userbases spread misinformation and toxicity. They've managed to eclipse that poor performance in 2020, with information related to both the coronavirus pandemic and the ensuing presidential election. These services took zero responsibility and failed to keep their networks safe from would-be authoritarianism, racists, misogynists, antisemites, hatred of LGBTQ people, and toxic conspiracists. And, this year, we get to add Parler to that list as well, which utterly thrives on such content under the guise of freedom of speech. Only when taken to the task in the final months of 2020 did the social networks take any corrective action by issuing advisory messages on posts of prominent misinformation agents and throw them off their services when they should have done it years ago.

2. The Microsoft Duo and Motorola Razr 2

I think the Microsoft Duo was the wrong phone at the wrong time. Even in the best of years, when people are out being mobile and commuting to work, this device would have many problems. Despite an impressive industrial design, the hardware was outdated when it was released because of how many delays this thing had. It was underpowered, with not enough memory to drive those two screens, so the device was laggy. It was just too expensive for what it offered. Some folks said the screens were too big for a smartphone and yet too small to be an effective tablet. I know Ed Bott, who recently sent his back, wants one with bigger screens so it could be an iPad replacement.

The Motorola Razr 5G is the same story: An excellent industrial design, but arguably with poor hardware driving it, especially if you compare devices at much lower price points such as the Samsung S20. Expensive and underperforming is a bad combination, especially in 2020. Both of these phones were big fat Tech Turkeys.

3. Quibi Burns Through $1.75 Billon and Flames Out In Six Months

My Jason Squared co-host Jason Cipriani said, "What is it? No, really, I must have missed it." Indeed, because nobody used the service. Quibi was the failed subscription video streaming service targeted for smartphones formed by Jeffrey Katzenberg and Meg Whitman. The content was offered in 10-minute bursts. The venture burned through $1.75 billion in one year raised by investments from major Hollywood studios, and the service shut down six months after its launch in April. In the socially distant age of COVID-19, people wanted conventional, long-form content from the services they were already paying for, such as Netflix, Amazon Prime, or Hulu, or if they wanted to snack on videos, they wanted it for free on YouTube. A terrible idea and a big waste of investment.

4. Facebook Portal, the IoT Device You'd Be Crazy to Install

I think people find Facebook as a company intensely untrustworthy, so the idea of using hardware that the company has its grimy tentacles in, placed in the sanctum of your home, is a bit disturbing. It's not like Google or Amazon doing this is fundamentally any better, as those other companies have similar products. Still, I think people want to have the ability to maintain their distance from Facebook if they wish. It's one thing is to have Facebook as an app you can delete; it's another to put it on a hutch in your living room or on your kitchen counter, always listening, and with a camera that tracks your movements at all times. There is just a lot of creepiness, data manipulation, and privacy intrusiveness aspects to the company that I think people can't get over, and for a good reason. Burn the Facebook Portal with fire.

Speaking of burning with fire, the Johnny Cash Award goes to the Amazon Ring. Literally, some models were catching fire, so Amazon had to initiate a product recall in November. Essentially, this is a problem related to how the devices are screwed into the wall, and if it isn't done right, with the correct screws being used, the batteries built into the device can overheat and catch fire. Apparently, there were 85 incidents of the doorbells incorrectly screwed in, and 23 of these ignited, causing minor property damage, and in eight instances, some people got burned. Ouch.

6. Google, Who Reneged on the Cloud Photo Storage Deal

After years of offering unlimited free cloud storage for anyone who used their Google Photos, the company decided not to make it unlimited anymore. It's an incredibly aggravating problem for some of us who are legacy users of the service. I have like one year of storage left based on the tool that Google published. Unless you own a Pixel, you're going to pay after you hit that 15GB free barrier.

7. Apple Misses the Boat on USB-C

Look, as a whole, I think Apple did exceptionally well this year. However, migrating iPad Air to USB-C, as it did with iPad Pro, and then not migrating the iPhone 12 and the lower end iPad Gen 8 to USB-C is just plain ridiculous. It redesigned every other damn aspect of those products; I can't see why it wouldn't want to simplify things, especially when they have now don't include chargers with these products for green reasons. It's more green to have the products use the existing standard.

Do we want to go there? Yeah, I think we have to because this is biotech. Hydroxychloroquine is a malaria drug repositioned for use with COVID-19 treatment. It was heavily touted by the Trump administration and millions of his followers as some miracle drug that would reduce the hospital mortality rates quicker. It didn't work. The clinical tests by the FDA and other worldwide health organizations showed it was worthless. Still, members of the Trump administration and the President himself continued to talk about it anyway as if it worked when it was proven that it was utterly ineffective. Remdesivir, on the other hand, was thought to have some real promise. Still, again, it turned out in the clinical trials, it had no impact on patients and was a disappointment because even Fauci was hopeful it would be beneficial, but it wasn't.

9. COVID-19 Contact Tracing in iOS and Android Fails to Take Hold in the US Despite Efforts From Apple and Google

While Apple and Google spent considerable effort cooperating and developing shared APIs that allow their mobile operating systems to exchange COVID-19 contact tracing data, few US states adopted the technology during the heights of the pandemic. This was due to several reasons, including underfunded, overwhelmed, and poorly run local health systems that found themselves unable to implement the solutions and a flat-out political obstruction in some states to use the technology. Fortunately, toward the end of the year, some pre-built solutions that are relatively easy to deploy, such as the Linux Foundation's open-source COVID-Green and COVID-Shield, and Apple/Google's Exposure Notification Express, began to be rolled out. However, only 16 of the 50 states and the District of Columbia are currently implementing these solutions, when we really should have a national solution in place, mandated by the Federal government.

10. The Pariah Treatment of Huawei and Other Chinese companies by the United States Commerce Department

Locking Huawei out of our national 5G networks and denying the company access to licensing key intellectual property is harmful not only to our international relations and trade relationships with China but also to US consumers. The Huawei P40 Pro and the Mate 40 Pro were arguably some of the best mobile hardware devices to be released in 2020. Still, they were made unpalatable and effectively unpurchaseable by US consumers due to the company's inability to license Google Mobile Services for their Android devices, as they were placed on the US Commerce Department's Entity List by the Trump administration. I have to think that our mobile device industry would have been much more competitive, price-wise, had these products been allowed to land on our shores, with a full Google-blessed Android stack. Let's hope that the incoming Biden administration takes a more proactive approach to deal with China than just declaring them a pariah nation and penalizing Chinese companies that make good products. Are all these Chinese products perfect in their implementations of security and malware-free? No. Does China engage in some activities that are against our national interest? Yes. But there are other ways to deal with this.

What were your picks for Tech Turkeys in 2020? Talk Back and Let Me Know.