Reliance Jio has the highest 4G availability and lowest latency in India, while Airtel has the fastest download speeds and Vodafone's Idea has the fastest upload speeds, according to OpenSignal.
Written by Corinne Reichert, Senior Reporter on Oct. 31, 2018 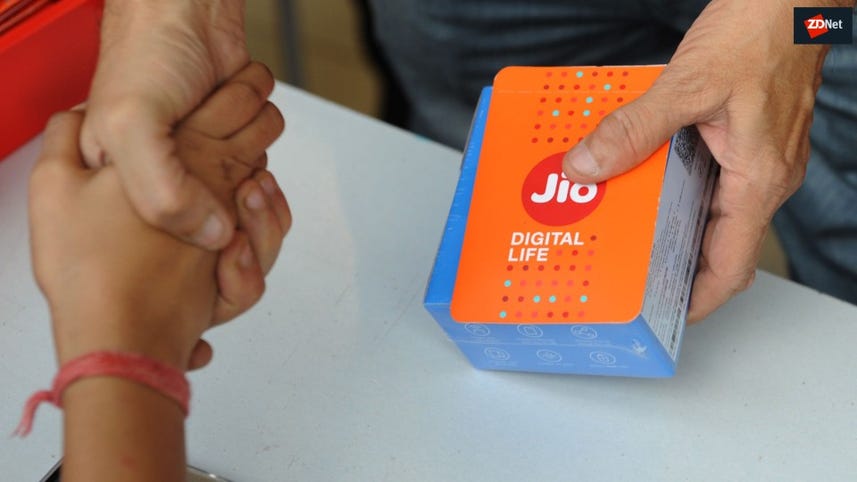 OpenSignal has published a report on Indian mobile telecommunications, with Reliance Jio winning on 4G availability and latency while Airtel clocked the fastest download speeds and Vodafone's Idea was the fastest for uploads.

Calling Jio "remarkable" and "hugely impressive" with its rapid rate of customer growth, OpenSignal said it scored 96.7 percent on 4G availability, trailed by more than 20 percentage points by Airtel, on 73.99 percent; Idea, on 73.17 percent; and Vodafone, on 72.59 percent.

"The operator has managed to achieve availability scores of over 95 percent in all of India's regions, despite huge variations in topography, and in the face of massive increases in subscribers and data consumption," OpenSignal said.

"4G Availability scores of over 95 percent are very rare, particularly remarkable in a relatively new LTE market like India ... Jio has recently secured infrastructure assets from now-defunct rival RCOM, while it is now turning its attention to the fixed-line sector, meaning we expect to see no let-up in the Jio success story."

Jio additionally tied first with Airtel and Vodafone on the new category of "video experience", which analyses how customers experience video streaming including load time, stalling rates, and picture quality.

However, Airtel remained the winner across download speeds, providing an average of 7.53Mbps on average for its customers -- 9.96Mbps on its 4G network and 2.53Mbps on 3G.

Across upload speeds, however, Idea was the fastest with speeds of 2.88Mbps. It was followed by Vodafone, on 2.31Mbps; Airtel, on 1.9Mbps; Jio, on 1.58Mbps; and BSNL, on 0.78Mbps -- although OpenSignal noted that BSNL has been approved by the regulator to deploy a nationwide LTE network across its holdings in the 2100MHz spectrum band.

"The Indian mobile competitive landscape is set for further upheaval with the merger of Idea and Vodafone," OpenSignal added.

"The merged Vodafone Idea will be India's largest operator in terms of subscriber share, and the company's combined customer bases, and network and infrastructure assets, will undoubtedly make it a force to be reckoned with."

Despite this, OpenSignal said it is predicting the Indian telco price war to end soon, saying there are questions over whether Jio's aggressive price offerings are sustainable.

"With a major 5G spectrum auction expected within the next couple of years, India's mobile operators face some tough decisions about where to focus their investment ... India has already seen a savage round of mergers and exits in the past few years, and competition does not appear to be subsiding," OpenSignal said.

"Quite simply put, something has to give. And Jio is signalling the beginning of the end with its move away from unsustainable free offerings towards tiered paid data models that are more familiar in the rest of the mobile world.

"This will hopefully take some of the pressure off operator margins, and as fierce competition and subscriber growth begins to plateau as the market matures, India's operators will have more breathing space to focus on other ways to differentiate, such as bundling and service quality, as opposed to a race to the bottom on price."

Reliance is betting that it, and not Walmart, will be Amazon's arch-rival in India

If Reliance manages to execute its triple play of content, carriage, and commerce, it could become a retail juggernaut that even a seasoned global giant like Amazon will find difficult to compete with.

The need to look like our selfies has led to a huge spike in plastic surgery, but contrary to what you may think, it has less to do with our vanity and more to do with mental health.

While India's IT managers get the axe, old world coders get a lifeline

In the topsy-turvy world of technology, those with a command of seemingly forgotten languages like Cobol or Fortran are experiencing gainful employment while managerial fat cats who were sitting pretty not so long ago have been unceremoniously ejected.

Beleaguered telecom has made content red hot in India

Content providers are making hay while telecom companies are yet to figure out a monetisation model.

Apple vs. Android: What does India think? (TechRepublic)

In this guest post, Dr. Manroop Takhar believes that Android currently has the edge over Apple in India. Do you agree?