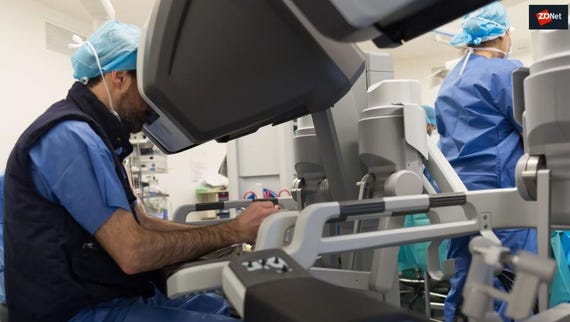 Another major acquisition was just announced in a big week for the robotics sector. Johnson & Johnson, purveyors of baby powder, pharma, and medical devices, will acquire surgical robotics company Auris Health for $3.4 billion, with another $2+ billion in milestone payments.

The news comes on the heels earlier this week of FLIR's acquisition of former iRobot spinoff Endeavor Robotic Holdings. The automation sector is maturing rapidly, exiting the "proofing" stage in many areas and attracting big money from legacy companies looking to buy readymade robotics portfolios.

As I've written, Auris Health, which was founded in 2007 by Federic Moll, co-founder of the surgical robotics sector-leader Intuitive Surgical, has made an art of keeping its R&D under wraps. Last year, however, Auris got FDA approval for its Monarch platform, an endoscope that can be used to take lung biopsies. That bot is part of a class of flexible robots that avoid cutting patients by using the body's natural openings--the mouth, in the case of the Monarch.

The company has chosen lung cancer as its first surgical target. The much better known Da Vinci Surgical Robot from rival Intuitive Surgical is used for a variety of procedures and is particularly popular for prostate surgeries. Intuitive has dominated the $60B robotic surgery market for two decades and has aggressively built its portfolio of patents in the space, making it difficult for would-be competitors to get footing.

Last year, Auris spent $80 million acquiring another Moll company, Hansen Medical, which has a trove of valuable patents relevant to robotic surgery. The company has stealthily raised around $800 million, and its latest valuation topped $2B.

That makes the sticker price for Johnson & Johnson's acquisition surprising. Auris has only one approved product targeting a very specific medical condition. According to Auris' website: "With our technology, physicians will be able to access early stage lung cancer without incisions, allowing accurate diagnosis and targeted treatment." Cancers of the lungs and airways kill more than 150,000 people each year, in part because diagnosis often comes late. Current surgical treatments are invasive and risky. Auris clearly sees an opportunity to do better.

For Johnson & Johnson, the acquisition is a longer term bet. Robot-assisted surgery is fast becoming the new norm. Moll's vision, back in the 1990s, was that robots could be used to close the wide gap between average surgeons and world-class experts.

Though penetration of the technology is still quite limited, that vision has become a reality in areas like prostate surgery, where incidents of lingering complications like erectile dysfunction have plummeted when the Da Vinci is used.

Join Discussion for: Johnson & Johnson to pay $5+ billion for...