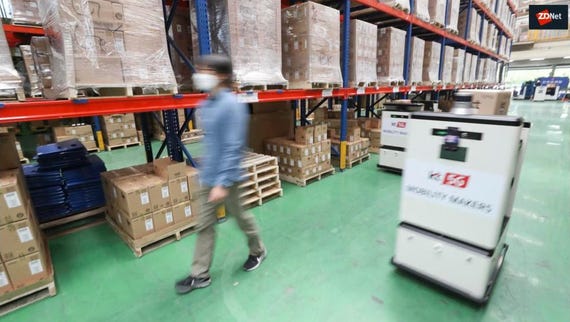 South Korean telco KT has deployed autonomous carts with 5G connectivity at its smartphone warehouses to alleviate the workload of staff, the company announced.

One version of the cart, dubbed NarGo, will have a cart that has multiple carts trailing behind it, like a freight train. It is designed to carry large quantities of cargo, with each cart being able to carry 100 kilograms of goods.

Another version, called TarGo, is a single cart that follows a designated person and helps staff with assortment duties. It also has a payload of 100 kilograms.

The autonomous carts will alleviate workloads and increase efficiency for warehouse staff, the telco said. It will also lessen human-to-human contact, which is a concern for companies in light of the COVID-19 pandemic, the carrier added.

KT said a trial deployment at one of its warehouses has led to staff movement decreasing by 47%.

The carts use 5G connectivity and a monitoring system to collect data on their movements.

The telco said it hopes to eventually connect this system to cloud platforms to allow the carts to be deployed at larger and more varied logistic operations going forward, such as hospitals and libraries.

In December, KT deployed service robots at a hotel in Seoul that could get on elevators on its own and deliver goods to rooms.

As of the end of the first quarter, KT's profits have fallen by 4.7% from decreased smartphone sales and roaming due to the COVID-19 outbreak.

Roaming and smartphone earnings were negatively affected by COVID-19, but the telco saw growth in 5G and content.

KT has succeeded in data transfer between its 5G network and a satellite 36,000 kilometres away.

A GlobalData report predicts a steep drop in mobile and fixed voice revenue will drag down overall segment growth.