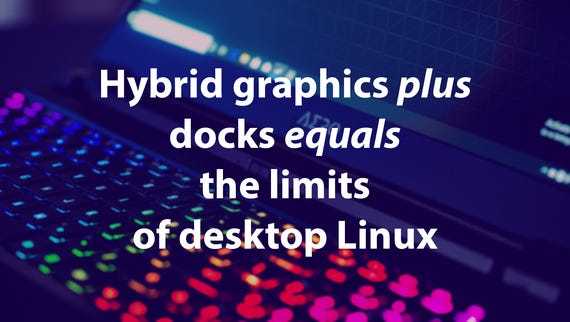 Last month, when Lenovo announced it was going to certify its ThinkPad lineup for use with Linux operating systems, my mind turned to one device, the ThinkPad X1 Extreme Gen 2.

At the end of last year, I chronicled my issues with the device, and while it was fair criticism at the time that my use of Fedora might not have been the best, with news that Lenovo was going to offer to preload Ubuntu, Red Hat, and Fedora distributions, that choice was more relevant than I could have imagined at the time.

Since its announcement, a surprising number of firmware updates have appeared for the X1 Extreme.

It went unmentioned last year, but the Synaptics fingerprint reader on the laptop was completely useless until around two weeks ago. That brand of reader had long been a pain point when combined with Linux, so it is nice to see some support finally land.

As usual with new Linux compatibility, there are a couple of caveats. You can log in with your fingerprint, but GNOME 3 will not unlock its keyring until you type in a password, so it is best to type in a password when you log in, and use the fingerprint to unlock the lock screen thereafter. On the other end, once a fingerprint is registered, sudo will demand a fingerprint instead of a password. It's really hard to have your cake and eat it too when it comes to desktop Linux.

But the biggest pain point with the X1 Extreme by far was the hybrid graphics setup, which at the time appeared to be a choice between using only the Nvidia GPU or the Intel integrated graphics.

After scouring the web on and off for almost six months, I am pleased to report that a solution was found -- the xorg.conf lines are more or less what's in the documentation but I needed a BusID line for both the Nvidia and Intel device blocks.

I've been using it like this for a couple of months. The display will sometimes freeze for a few microseconds however, and every time, it feels like the X server has crashed until the cursor thankfully shifts when it catches up. So even when it does work, it is not the best experience on offer.

If not for the issues with having to connect external displays I discussed last year, one would be better off using either the discrete or integrated GPU full-time, rather than messing with Nvidia Prime output and X server configurations.

It will be very intriguing how a certified ThinkPad laptop with hybrid graphics performs when Lenovo begins to release them, but properly setting up the X server configuration would have saved many hours of searching for solutions and trial and error testing.

This leaves just one gaping issue with the device. An entirely known quantity but it still needs to be addressed: Battery life.

Part of the problem is that due to running hybrid graphics, and having no way in Nvidia's control panel or the BIOS to switch off the discrete GPU entirely, it is always sucking down an amount of power, even if tiny.

Head over to the Lenovo site and it will claim that this device provides up to 14 hours. That's at least double, if not triple, what you will get in the real world.

I once saw the power remaining widget say 16 hours in the first minute after I charged it to 100% and removed the power cord -- and I suspect a Lenovo engineer once did too, screenshotted it like I did, and wrote it onto a spec sheet. A minute later though, the fleeting fantasy was over and the laptop reported that less than 6 hours battery remained.

After months of usage, any time the laptop says over 4 hours of battery remains is a good time. Lurk in the Lenovo forums and you will see that regardless of whether it is Linux or Windows, this sort of number is par for the course.

However, there were a number of things I did to get that number as high as I could.

The big one is to install powertop to monitor power usage and get an idea of what is going on. One thing I would recommend is to enable the powertop service to automatically set a number of options to maximise power use.

One thing powertop showed was nine watts was headed to the virbr0 networking device. This virtual device provides connectivity to hypervisors, something I don't run with any frequency on here, so I switched it off. For similar reasoning, the ethernet port was disabled in the BIOS. Powertop also confirmed that Wi-Fi was sucking down a bunch of power and turning it off does make a genuine difference.

All up, if you disable all networking, put the screen down as low as you can possibly read it without giving yourself instant eye strain, and cross your fingers and toes, you might be able to eek out five and a half hours of battery life. This still means, should conferences ever return, you'll be heading to a power socket at lunchtime.

In the past hour, I've seen over 20% of the battery dissipate, and that is more or less the standard discharge rate now. At least it is now under 30% per hour.

I point all this out because I am a person who doesn't mind donning the gumboots and tinkering away in the Linux plumbing. After six months of this, I feel I have taken it to a point where there is little potential performance left to squeeze out of the laptop.

Lenovo needs to ensure it is able to provide a proper, workable, and optimised Linux setup on day one. Not months later when users scour forum posts looking for an issue that closely resembles the one they are having at the present time.

Doing it for the Intel-only machine, like the regular X1 Carbon, should be a cinch, but since the company said it was going to certify its entire ThinkPad range, it will have to deal with problem children like the X1 Extreme sooner or later.