LG's OLED TV on display in front of hundreds of industry associates at a prestigious industry tradeshow has shown signs of prominent burn-in, ZDNet has learned.
Written by Cho Mu-Hyun, Contributing Writer on July 5, 2018

LG Electronics' OLED TV on display at a prestigious industry tradeshow had shown signs of prominent burn-in, ZDNet has learned.

At the SID Display Week 2018 in May at Los Angeles Convention Center, LG's OLED TV and Samsung Electronics' QLED TV were displayed in tandem by Nanosys, a quantum dot developer, at its booth.

The OLED TV was a 65-inch 2017-model purchased by Nanosys only two to three weeks prior to the event at a third-party store.

The TV was turned on for eight hours a day during the tradeshow and showed signs of burn-in at its top right corner immediately on May 22, the first day of the three-day tradeshow, according to multiple eye witnesses.

On the second day of the show, the problem became more noticeable and the Familytime logo that was on display was left permanently at the top right corner, they said.

Officials of LG Display, which also had a separate booth at the tradeshow near the entrance, visited the Nanosys booth multiple times after the problem emerged and made inquiries to the company on the TV, they added.

The TV at most ran 50 to 60 hours prior to being displayed at the event.

This is not the first time LG's OLED TVs displayed publicly have shown signs of burn-in. The South Korean tech giant's new OLED TVs that were displayed at Incheon International Airport showed signs of burn-in after three months and were eventually replaced with LCD models.

For the past two years, sales of OLED TVs have gone up thanks to price-drops and increased offers from multiple vendors such as LG Electronics and Sony -- both companies get their OLED display panel supply from LG Display. Reports of burn-in have also concurrently risen.

Burn-in refers to permanent image retention, usually caused by leaving a static image on the screen for a long period of time.

TV reviews site RTings.com has been conducting a burn-in test on six 2017 OLED TVs since January this year. Uniformity issues were clearly visible after the four-week stage. LG engineers visited the site's lab and confirmed the issues were a result of a factory problem and that some panels were more prone than others.

The South Korean tech giant has denied the problem, saying its TVs can last 30,000 hours, or around 10 years with an average daily viewing of eight hours, without burn-ins. 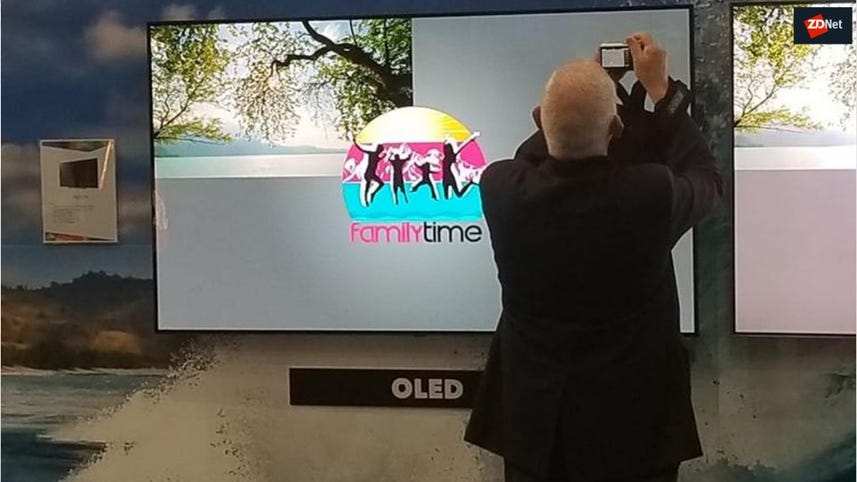 LG Display has shown off next-generation displays, including a 77-inch transparent flexible OLED, at SID tradeshow in LA.

Samsung has begun pre-orders for its MicroLED TV, called The Wall, with the first orders shipping in the third quarter.