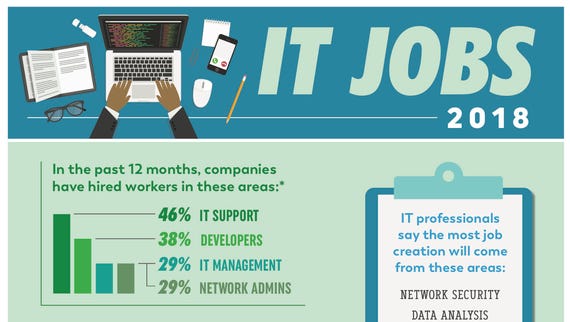 Do you want a tech job? Then, it's time to move away from Windows and head toward Linux and open source. According to The Linux Foundation and Dice's 2018 Open Source Jobs Report, 87 percent of hiring managers are having trouble finding open-source talent, while hiring open-source talent is now a priority for 83 percent of employers.

"Open source technology talent is in high demand, as Linux and other open source software dominates software development," said Linux Foundation's executive director, Jim Zemlin, in a statement. "I am encouraged that that companies are recognizing more and more each day that open-source technology is the way to advance their businesses. The Linux Foundation, our members, and the open source ecosystem are focused on ensuring training and certification opportunities are highly accessible to everyone who wants to seek them out."

I see this myself. I go to almost a dozen technology trade shows a year. And, whether they're open-source based, Open Source Summit or not, or CES, one thing is always true in the past few years: Companies aren't just hungry, they're starving for open-source and Linux-savvy workers. At some shows, especially ones about cloud technologies, such as OpenStack Summit, where literally every company was looking for employees with open-source skills.

This latest survey found that Linux skills are back on top as the most sought after skill, with 80 percent of hiring managers looking for tech professionals with Linux expertise. Don't have that much experience or certification? If you have some skills, 55 percent of employers are now offering to pay for a Linux certification, such as the entry-level CompTIA Linux+ to the mid-level Linux Professional Institute (LPI) LPIC- 3: Linux Enterprise Professional Certification and the high-end Red Hat Certified Engineer (RHCE). That's up from 47 percent in 2017 and only 34 percent in 2016. When companies will pay for certifications, you know they're hungry for staff.

The eternal debate over the merit of certifications versus on-the-job experience continues as ever. But, according to Foote Partners, the average certification will get you a 7.6 percent premium over a job's base salary.

While Linux skills have become essential for entry-level tech jobs, other open-source technologies are gaining in popularity. Container expertise, for example, has exploded in importance. In 2017, only 27 percent with seeking that expertise. Today, 57 percent of hiring managers are looking for people who know how to handle containers.

Cloud technology experts are the second most sought after staffers at 64 percent. Security and web technologies come in next at 49 percent. Networking comes in at 46 percent.

And 34 percent of hiring managers are looking for professionals who know their way around open-source licensing and compliance issues. That's up from 29 percent last year.

Dice reports that open-source professionals with the most specialized and rarest skills can often write their own salary checks. That said, companies are increasingly finding other ways to overcome their companies' budget constraints for open-source workers overall. More than 70 percent now use incentives such as offering more vacation, flexible work hours. or telecommuting.

For open-source workers, it's not about salary or benefits. Only 13 percent of respondents reported that money and perks most influenced their decision to pursue an open-source career. Instead, they cited the ability to work with the latest technology, 65 percent; the freedom of open source 64 percent; and their personal passion about open source, 62 percent.

The fierce market for open-source talent shows no signs of abating. This is being driven by the push to DevOps and the use of cloud-based technologies such as containers and container orchestration.

Want to know more? The full 2018 Open Source Jobs Report is available to download for free.

Join Discussion for: ​Linux and open-source jobs are in more demand...