Low-code and no-code platforms are multiplying, and the first to reap the technologies' benefits will be entrepreneurs with a good idea.
Written by Daphne Leprince-Ringuet on Nov. 18, 2020 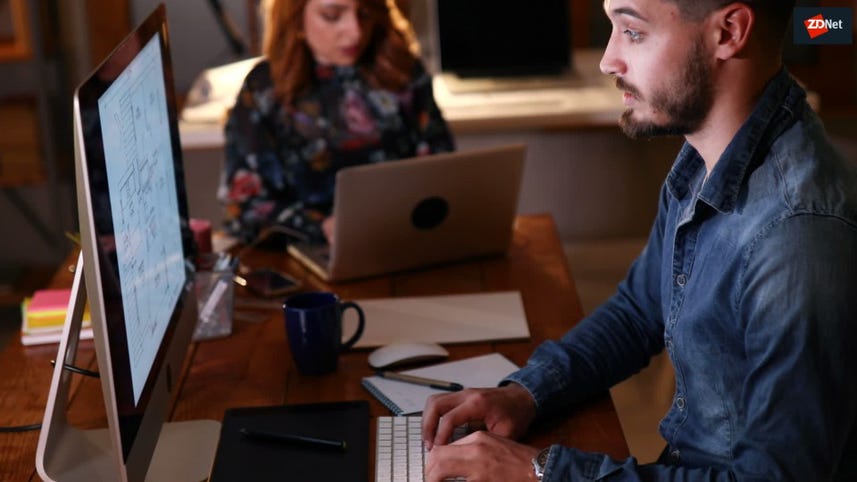 Spring has always been a busy time for plant nurseries. This year, "busy" has been an understatement: amid a months-long lockdown, there has been unprecedented enthusiasm for more greenery. For US-based nursery Classic GroundCovers, the sudden deluge of orders that the COVID-19 crisis brought about certainly kept the business busy – but also came with unforeseen consequences.

This ebook, based on the latest ZDNet / TechRepublic special feature, helps IT leaders understand the consequences of non-developers becoming app builders and how to successfully take advantage of this trend.

The sheer volume of requests overwhelmed the company's small-scale, manual order processing system. But in only one month, despite limited technical knowledge and the little time available to brainstorm ideas, Classic GroundCovers' team found itself using a brand-new app that automates the entire process, integrating orders from the company's e-commerce website with in-house business applications.

Classic GroundCovers used a low-code app development platform, Evoke, which is designed by technology company BlueFinity to help businesses easily deploy apps across various devices, with no need to code.

Classic GroundCovers office manager Amy Milton explains that when the volume of orders was particularly high, up to 12 hours were spent every day manually processing orders.

Leveraging Evoke, the plant nursery created an app that integrated with the company's order management system. "Orders are now sent into the system directly and verified with the customer. A shipping date is then assigned, saving a huge amount of administration time, and eliminating any errors from the process," says Milton. "Streamlining these processes has halved our administration time and made the whole order process much less stressful."

Low-code development platforms are on the rise, and they are letting companies like Classic GroundCovers access sophisticated tools regardless of their track record in digital tools. Often named alongside "no-code" platforms, low-code tools consist of cutting, as much as possible, the hands-on knowledge that is necessary to build software.

Instead of writing every single line of code for a given application, users of a low-code or no-code platform can build their project with point-and-click interfaces. Non-coders can, in theory, assemble Lego-like blocks of pre-defined code to create customized software, rapidly and at a much lower cost than hiring a professional programmer.

BlueFinity is only one example of a company offering low-code and no-code services, and the biggest tech players are competing in this fast-evolving space. Analyst firm Forrester has predicted that the low-code market will grow 40% annually to top $21 billion by 2022, while Gartner forecasts that low-code application platforms will account for 65% of all app development by 2024. It's easy to see why the technology holds great promise, especially for companies that, like Classic GroundCovers, have little resources to allocate to high-end programming.

Custom programming was discarded by the plant nursery for a number of reasons, including the lack of IT specialist skills in-house. "We needed a solution we could implement immediately using our existing staff," says Milton. "As far as we are concerned, Evoke's low-code business app generator was the only viable solution for us."

Low-code and no-code platforms, of course, have their limits. Developers tend to see the tools as an extension of methods they already practice, such as relying on pre-built frameworks or Javascript libraries, rather than a downright replacement of their work. For Richard Wang, the CEO of coding boot camp Coding Dojo, low-code and no-code are useful to help small businesses with some digital operations, but they are not a catch-all solution.

Sophisticated applications will always require a professional programmer's skills. For that reason, Wang is confident that medium and larger enterprises will continue to opt for custom-built applications that come with more flexibility and customization options.

"While it can help with the speed of development and allocation of resources, low-code and no-code restrict customization of digital assets, have limited integration with existing core digital infrastructure, and depend too heavily on the low-code and no-code vendors or platforms for configuration and delivering refined user experiences," says Wang.

Where low-code and no-code platforms might make the biggest difference is rather with businesses that have no legacy technology, and are starting from a clean slate; think start-ups and small companies with budding ideas. Where would-be entrepreneurs could have previously been put off from starting a business for want of technical skills, the technology effectively offers DIY solutions to create software with readily available tools.

DSP Concepts is a low-code platform provider that specializes in audio software. The company produces Audio Weaver, a drag-and-drop audio development tool that can be used to create sound products of all kinds, whether for a TV, a car, or a smart speaker. For non-technical inventors, explains Paul Beckmann, the company's co-founder, the platform's appeal is growing.

"A lot of audio engineers have golden ears more than they have a heavy maths background," he tells ZDNet. "They know what sounds good and to date they've been prevented from working on products because they don't have the coding capabilities to do that. We offer easy-to-use tools that people, without heavy-duty coding expertise, can contribute to."

From building mask-fitted mics and speakers to clarifying muffled speech in pandemic times, to developing a digital stethoscope that filters out external noise for doctors working in an ambulance: Audio Weaver is servicing a host of companies which have new ideas – but not necessarily with coding skills.

One of them, Milo, creates walkie talkies 2.0 that let a group of users communicate through a wearable hands-free device in settings ranging from working in a factory to hiking up a mountain. Enabling a multi-voice service over an ad-hoc wireless network that performs well despite external noise being as difficult as it sounds, the start-up CEO Peter Celinski picked DSP Concepts' platform for the audio processing part of the job.

Audio Weaver enabled Milo's team to have a prototype ready in days, which would have been near-impossible without low-code tools. "This has been critical to us as we were able to quickly prototype in Audio Weaver and then run the audio processing models on our hardware and make adjustments in real-time to quickly validate our approach," Celinski tells ZDNet.

"By implementing low-code tools within our systems, our developers can work quickly and efficiently to bring new devices to market, reducing time to production."

As enticing as the prospect may sound to small companies with restricted budgets, the trend might also come as a threat to programmers. More money spent on automated coding platforms, after all, means that less investment will go towards hiring human developers.

But while the profession will change, it is not at risk of disappearing. Even if non-developers start playing around with Lego blocks of code to build applications, a degree of programming will still be required to create those blocks in the first place; and it is likely that a human coder will also be necessary for higher levels of sophistication, even when using low-code tools.

Ritam Gandhi is the founder of Studio Graphene, an app development platform that works with start-ups to build digital products and services. "We're heading towards a more specialist development community," he tells ZDNet.

"We'll have either developers that are good at low-code, who have basic engineering skills and are better at solving problems by using the existing tools that are there. And on the other extreme, we'll have complete specialist developers working on those re-usable components to be leveraged by non-specialists."

Just like the past decade has seen a divide between back-end developers and front-end developers, the next few years will provide, therefore, the next iteration of coding. The process, according to Gandhi, is only the natural evolution of the profession as new tools come along.

The current sentiment among developers, when it comes to low-code platforms, is one of cautious welcoming. For Coding Dojo's Richard Wang, for example, the technology's restrictions might ultimately limit its widescale adoption. "The technology industry is always changing and it's impossible to predict which new technologies will become common, and which will die off," stresses the coding boot camp CEO.

Gandhi argues that the technology has too many benefits to be dismissed. Studio Graphene's main customer base consists of start-ups; Gandhi has stopped counting the number of founders he has met who can't code and need the technology to get their ideas off the ground.

"Every day, you walk around and get an idea about a platform or an app you could use, but you don't have the skills, or the budget to build it," says Gandhi. "That barrier to entry is now lowering. We should welcome it because it will enable more ideas to come to life, more products and services to make things more efficient. That's a positive thing."

As more and more non-technical entrepreneurs gain access to low-code and no-code tools, so will the number of useful applications multiply; and the technology's ramifications for the start-up ecosystem could be significant. Turning that good idea into an actual product could be about to get a lot easier.

Linux
What is Android 12 Game Mode and should you be using it?