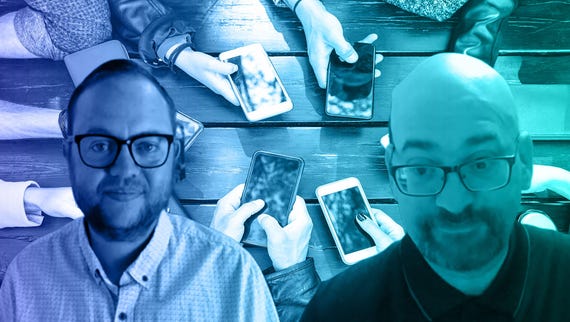 New iPhone rumors point to a comeback for Touch ID, but is it needed?
Watch Now

Consumer demands are very different from those of business users. While not having the right app installed or running out of storage space is an inconvenience for ordinary users, these things can put a serious dent in productivity and can mean the difference between getting the job done or not.

The first must for any iPhone that's used for business is to make sure that the data on the device is protected.

At the very minimum, I recommend that the device makes use of a strong passcode rather than a PIN code. The Require Passcode setting should also be set to "immediate," so the device locks as soon as it is not used, and set Erase Data to "on" so that tampering with the device results in erasure.

I consider a decent, hard-wearing, robust case to be a must-have for my iPhone. If I break it due to a drop, then I'm out of action for some time, and that's not an option.

I've tried a lot of iPhone cases, and the two that stand out for me are the Urban Armor Gear Monarch and Unicorn Beetle Pro. Both are tough and stylish and offer a high level of protection against both drops and the elements.

They also add a much-needed grip to the iPhone, which is about as grippy as a wet bar of soap.

Don't rely on encryption that's not under your control. If you're not supplied with a VPN, it's a good idea to get one yourself and use it. My VPN of choice is F-Secure's Freedome, but there are others out there that will protect you from eavesdropping in insecure Wi-Fi or cellular connections.

I used to think of cloud storage as a luxury, but nowadays, I see it as a necessity. I use Dropbox (which supports two-factor authentication through a variety of means, including Yubikey hardware and Google Authenticator).

For added security, you can use a service like Boxcryptor to add end-to-end encryption.

You'll need to be able to handle a variety of documents, from word processor files to spreadsheets, to presentations (ugh, I know).

You can choose from Apple's suite of tools, or go third-party with something like Microsoft's Office 365 or Google Docs. Whatever you choose, get familiar with it, so you don't look like it's your first day on the job when using it!

Having two SIM cards is a great way to separate work and home life without having to carry multiple handsets. If your iPhone doesn't support for dual-SIM, then fear not, because you can easily add this using an adapter such as SIMore Speed X-Twin.

How to take amazing photos with your iPhone SEE FULL GALLERY

Cloud storage is great, but there are times when it's either just not an option (such as when you have a poor internet connection) or is unfeasible (for example, when you have large files to handle).

This is where external storage comes into play.

While I like the "flash drive" type accessories that plug into the Lightning port, I find the SanDisk Connect Wireless Stick to be far easier and less hassle to use. This is a flash drive -- with capacities ranging from 16GB to 256GB -- that has built-in Wi-Fi connectivity and battery, allowing you to access the data when you're out and about.

The drive can be recharged using a USB-A port and can stream to three devices simultaneously.

There's nothing like a flat battery to put a massive dent in your productivity. But portable power banks mean that this should never be an issue.

Dumb passwords like ABc123 or pa55W0rd just don't cut it these days. Either make use of Apple's built-in Keychain password manager, or invest in a third-party tool such as LastPass (which I highly recommend, because it not only helps keep passwords secure, but also helps you generate strong passwords, and prevent unauthorized access to your data).

Don't, whatever you do, use a program like Notes to keep your passwords in. No. Just don't.

It seems simplistic, but having a good document scanning app on my iPhone has saved my bacon more than once. Sure, you might be able to futz about with the Camera app to take a picture of a document, but a dedicated app does a much better job.

I recommend Microsoft's Office Lens. It's one of the best apps that I've tested and the one I use.

If the worst does happen, and you break or lose your iPhone, having an up-to-date iCloud backup will be your friend when it comes to getting your replacement iPhone back up and running quickly.

While the virtual iOS keyboard is pretty good, nothing beats having a physical keyboard if you are going to be pounding out a lot of words. One of the nicest keyboards out there -- one that works with both the iPhone and iPad -- is the Logitech Keys-To-Go. At $70 it is a bit pricey, but if you type a lot it pays for itself!