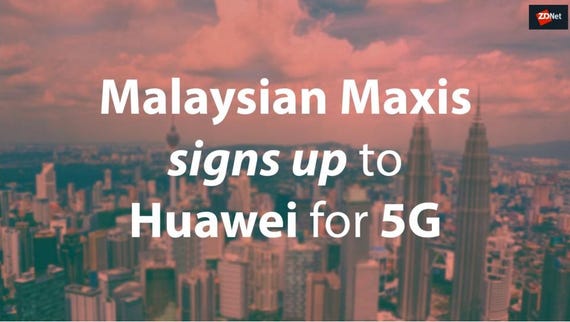 Malaysian Maxis signs up to Huawei for 5G
Watch Now

Huawei and Malaysian telco Maxis have signed a deal to roll out the latter's 5G network.

Maxis reported having 3.1 million postpaid and 6.4 million prepaid customers as of June 30. Malaysia has a population of around 32.6 million.

The company said in its second quarter earnings that it had a live 5G trial in March, which reported close to 3Gbps in speed, while 5G testing began in East Malaysia, the part of the country on the island of Borneo, in June.

"The impact of advanced technologies on our progress as a nation is inevitable and we cannot afford to be left behind, especially with Industry 4.0 already upon us," Prime Minister of Malaysia Dr. Mahathir bin Mohamad said.

"Collaboration between global players and local vendors is important to support a thriving technology ecosystem in Malaysia. I am pleased to see Maxis and Huawei taking advantage of this environment and supporting the growth of Malaysia's digital economy."

Earlier this week, it was announced that Indian telco Bharti Airtel had rolled out over 100 hops using microwave Multiple Input Multiple Output (MIMO) technology from Huawei that increased its backhaul capacity by a multiple of four.

The MIMO links between the towers have been used for half a year and are capable of transmitting up to 13 kilometres while using 20% less power, Huawei said. The company claimed Airtel now had the largest deployment of MIMO microwave on the planet.

Also on Monday, Japanese telco KDDI announced it had selected both Nokia and Ericsson as "primary vendors" for its 5G network.

A day later Samsung said it too was selected by KDDI to deploy radio base stations, as well as a virtualised radio access network.

In the works since 2017, the Chinese smartphone maker's three-storey flagship store spans 1,300 square metres and is manned by 120 consultants who hail from various fields including hotel, art, and aviation.

Chinese tech giant unveils ambitious plans to build the architecture needed to meet growing demand for more compute power and artificial intelligence, pledging to do so on an "open" ecosystem" and launching an AI training cluster that it says is 10 seconds faster that the current ResNet-50 record.

Join Discussion for: Malaysian Maxis signs up to Huawei for 5G