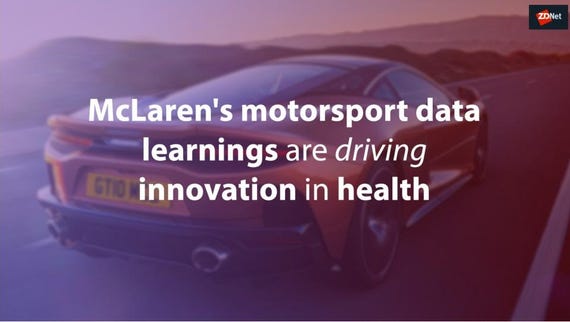 The name McLaren has an immediate association with Formula 1, but the organisation wants to be known for much more than that.

According to McLaren Applied Technologies health and human performance business unit director Duncan Bradley, the organisation is "really driven" to change the world with technology.

"We have such a great workforce with some really deep expertise, and we started to build that over the last 10 years into other industries, into public transport and optimising trains and public transport into automotive," he said, speaking at Dell Technologies World last month.

"But for me, one of the most exciting areas is how we can use that technology to really influence people's lives and really make it better for people. And that's our focus."

Speaking with ZDNet, Paul Brimacombe from McLaren Technology Group expanded on the organisation's growing presence outside of motorsport by saying everything the company does is derived from the capability of capturing data, being able to process data, simulate model data, and then being able to make decisions on what to do next based on the data.

Bradley said the journey for McLaren kicked off about 10 years ago; 20 years after Formula 1 went through a digital revolution driven by intense competition and investment into the sport.

"We started to measure cars to be predictive about their performance. And about 10 years ago, we were thinking about diversifying our business, we said, 'Well, using this technology, what a great thing to do would be to use that on humans'," Bradley recalled.

According to Bradley, that trend is currently cresting, with people eager for personalised prediction in every element of their life, be that for treating a disease or getting over the flu quickly, or even for elite sportspeople trying to maximise their performance.

"That's really what we're trying to predict and really intervene with people's lives in a really positive way," he said.

"For us, it started probably around '98, certainly with Lewis Hamilton, where we started to understand the driver not just from the things that you'd expect -- driver skills and cardiovascular fitness -- but actually psychologically, hydration, cognitive performance in the car."

He said McLaren came to understand that it was a combination of all of those things, even if they were small margins of performance, that could make all the difference.

Bradley said drivers are like a lot of athletes in other sports, eager to get all the data they can on their performance.

"People often ask, is it the car or is it the driver that's the fastest? Well whatever car you've got, you want the driver to be in peak condition to get all of that performance out of the car. So elite performers are always motivated to have the latest technology," he continued.

But he said the same is also true for everyday people, with the masses also wanting to be predictive and proactive about their health.

"If I go to the other end of the scale, where perhaps you're managing a disease in some way, the drive there to maximise your quality of life is equal. So if you can provide people with information that helps them be more understanding about their disease, the implication of the medication, be a little bit more specific about medication they have, that can be really impactful for those people as well," Bradley explained.

"But there's kind of a large group in the middle there, which is people just want to live more healthy, and we have some issues in society that we need to deal with. Being able to help people with that and tell them something new about their bodies, but in kind of the right way, not just flood them with data, tell them something new that they can really be proactive on is what we're really interested in doing."