Basketball Hall of Fame changing the game with fan-focused technology

The museum is undergoing a $23 million digital transformation to set the industry standard of how to preserve sporting history through technology.
Written by Asha Barbaschow, Journalist on May 7, 2019 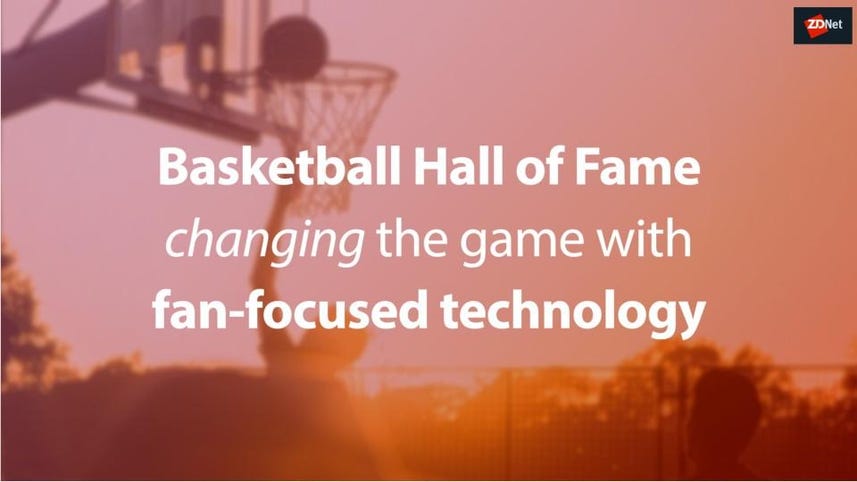 The Naismith Memorial Basketball Hall of Fame, like many museums, faces the challenges and complications of being "stale, static, and stuffy", but having been with the organisation for 10 years, Jason Fiddler believes technology can provide the opportunity to break that mould.

Based out of Springfield, Massachusetts, the Hall of Fame is an 80,000 square foot museum dedicated to preserving the living history of the sport of basketball.

Every year, the Hall welcomes around 250,000 visitors through its doors, but as technology finds itself immersed more and more into live sport, the museum showcasing the best of the best was becoming static.

According to Fiddler, basketball is the fastest growing sport in the world and is second only to soccer.

"It's fast-paced, exciting, interactive, technology-driven game, so as a museum that's dedicated to preserving the living history of that sport, we felt we were starting to get behind a little bit on the technology side," he told ZDNet. "We started to see that with customer retention ... you have to ask yourself, 'Why is retention dropping?' Our biggest feeling is we weren't really appealing to the younger generation."

To send the Hall down the right path, it recently underwent a $32 million capital campaign, with $23 million of that reinvested directly into the museum experience.

Speaking with ZDNet while at Dell Technologies World in Las Vegas last week, Fiddler detailed the transformation the Hall of Fame will be undertaking, splitting the mammoth task up into three phases.

"The way our Hall of Famers are currently represented in the museum is very static; it's a translucent image and it's a static biography. We have some artefacts that sort of complement those things, but from a tech side, that's about as bare-boned as you can possibly get," Fiddler said.

"If we're going to claim that we're the gatekeeper of the living history of basketball, ultimately we just need to do better than that and this capital campaign allowed us to do so."

The first phase of the construction project is focused on user experience, with Fiddler saying it was in direct response to sporting events getting longer and longer while fan appetite got shorter and shorter.

"So how do we speed up that experience but make it more dynamic, more interactive, and let the user really choose what they want to see and what they don't?"

"Within this program, and powered behind the scenes by Dell Technologies, the user can now come into the museum and see a series of 32 coaches -- some of the best coaches in the game -- they're able to generate a question to these coaches and in turn generate a conversation as the coaches return content based on which question they choose," Fiddler explained.

"There's a significant storage backup behind it -- we always have to start with the behind the scenes storage, you can't have any of these new fancy technology without the appropriate storage behind it, so that's really where this tech story started, a main overhaul of our storage -- then we started to develop into the consumer-based interactivity of it."

Second on the hit list is the Hall of Honor.

As its intention is to represent basketball Hall of Famers, the museum stood up a dynamic wall -- a 60 foot-wide wall comprising over a series of 50 individual monitors.

"Within these monitors we have the ability to capture individual Hall of Famers within each monitor on a rotating basis, so that if you have an appetite for a certain player or a certain decade or a certain team, you're able to throw content to that and choose which Hall of Famers you want to learn more about," Fiddler said.

"And then the really cool portion of that is we're doing the VIP experience, so now take that 60 foot-wide wall of individual monitors and turn that into one 60 foot-wide experience of your favourite Hall of Famer."

The final portion of the Hall's redesign will be a 30 foot-wide by 70 foot-tall monitor that will showcase basketball's "defining" and most memorable moments. The rest of the museum, Fiddler said, will be user-focused and comprise a lot of custom video content.

Fiddler said while the Hall has talked about employing augmented and virtual reality components, it hasn't made any solid plans as the technologies are still being formed.

One thing potentially on the horizon, however, is an interactive phone app that could perhaps take the museum outside of Springfield. Pondering the possibilities, Fiddler pointed to the likes of Pokemon Go as inspiration, where the envisioned app would combine basketball education with a visit to the Hall of Fame to finish.

Phase one opened last summer, with phase two on track to open in June. As soon as the Hall completes its enshrinement ceremony in early September, it will jump right into phase three, which is every square inch of the museum untouched, with a grand reopening pencilled in for summer 2020.

"As colleagues in this industry we need to start doing better [than static imagery], sport is just getting faster and bigger and stronger so we need to start representing those things better," he said.

"We're always pushing each other and challenging each other that's why when one of us does something, the next one says, 'OK, we've got to make sure we're keeping up with that' because although we're not direct competitors ... what we're trying to do is become pioneers in this industry and really just launch ourselves forward and by doing so, hopefully we can pull along everyone with us."