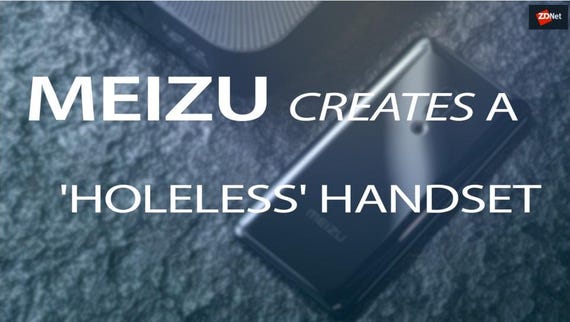 Remember the "holeless" phone that was being developed by Chinese smartphone manufacturer Meizu? In an interesting turn of events, Meizu CEO Jack Wong has said in a forum post that development for the Meizu Zero was just a publicity stunt.

First spotted by Engadget, Wong admitted in a Meizu forum yesterday that the crowdfunding campaign for the Meizu Zero was "just the marketing team messing about".

"The holeless phone is just a development project from the R&D department, we never intended to mass-produce this project," he said.

The announcement of the Meizu Zero certainly achieved its purpose of gaining widespread media attention, being covered by ZDNet as well as other sources.

The Meizu Zero was reportedly going to have a 6-inch AMOLED display and a fingerprint reader, and would be housed in a ceramic unibody that had virtual buttons for power and volume on its side.

The Indiegogo crowdfunding campaign for the device had raised $45,998 before it ended, but failed to reach its funding goal of $100,000.

Wong's words were surprising, considering the company released a prototype of the device during last week's Mobile World Congress (MWC), according to Mashable, which said the device was largely ignored during the event due to it being unlabelled and tucked away at Qualcomm's booth.

While Meizu will not go forth with mass-producing the "holeless" device, backers of the crowdfunding campaign will get their money back, as the campaign had a fixed goal rather than a flexible one. Indiegogo projects that use fixed funding goals can only collect the money raised if they hit their funding target.

Meizu is not the only Chinese company to have used Indiegogo to pique interest from consumers, with Chuwi last week starting a new crowdfunding campaign for its Aerobook laptop. Prior to the Aerobook campaign, Chuwi had created various campaigns for its SurBook and HiGame PCs.

Meizu creates a 'holeless' handset with no ports dubbed the Zero

No charging port, no headphone jack, no speakers, no SIM tray.

The Meizu M6 Note spans both the consumer and corporate world -- and sits well in both.

Meizu has outdone itself with its latest phones. The Pro 7 and Pro 7 Plus have some very cool new features.