Concern over harmful applications of AI once again sparks an employee protest -- this time at Microsoft.
Written by Liam Tung, Contributor on June 20, 2018 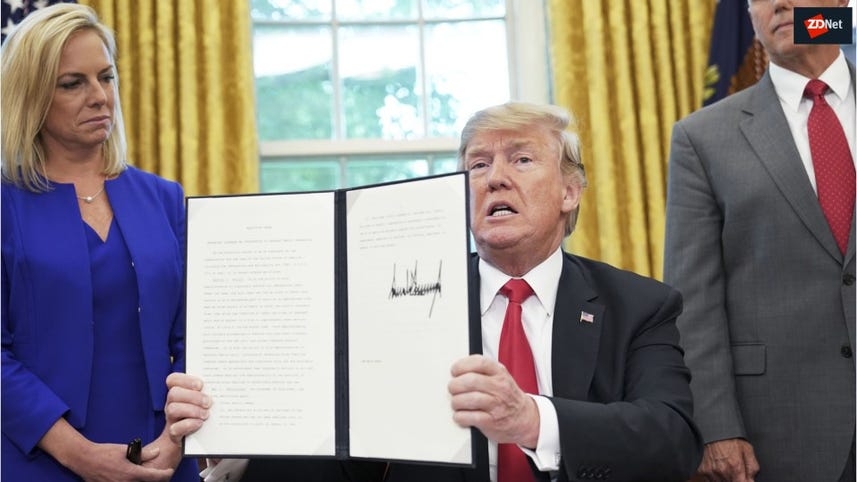 A Microsoft employee protest calling on the company to cancel its work with Immigration and Customers Enforcement (ICE) has prompted CEO Satya Nadella to speak out against the Trump administration's immigration policy under which ICE agents are separating children from families at the border with Mexico.

On Tuesday, more than 100 employees signed a letter to Nadella demanding that Microsoft takes "an ethical stand, and put children and families above profits".

The letter, published by the New York Times, calls on Microsoft to cancel a $19.4m contract with ICE for the provision of Azure Government cloud services.

Microsoft boasted in a blogpost in January it was proud to be supporting ICE's IT modernization and that Azure Government would give the agency the ability to process data on IoT devices and enable it to use "deep-learning capabilities to accelerate facial recognition and identification".

However, Microsoft employees warn that, "These are powerful capabilities, in the hands of an agency that has shown repeated willingness to enact inhumane and cruel policies."

Workers are also not satisfied with Microsoft president Brad Smith's statement that Microsoft is not aware of Azure being used for the purpose of separating families.

Microsoft also made a PR blunder yesterday, being caught removing a reference to its ICE contract. Microsoft restored the reference after being contacted by Bloomberg news.

"Microsoft is not working with US Immigration and Customs Enforcement or US Customs and Border Protection on any projects related to separating children from their families at the border, and contrary to some speculation, we are not aware of Azure or Azure services being used for this purpose," Microsoft said in a statement.

Nadella has since posted on LinkedIn an email he sent to employees, stating he is "appalled at the abhorrent policy of separating immigrant children from their families" at the southern border.

"This new policy implemented on the border is simply cruel and abusive, and we are standing for change," he wrote.

Nadella reiterated that Microsoft isn't working on projects related to child separation projects, and emphasized its tech is being used by ICE for less glitzy tasks than AI but rather "supporting legacy mail, calendar, messaging and document management workloads".

Regardless of whether Microsoft is directly involved in ICE's child-separation activities, the protesting staff want Microsoft to cancel its contracts with ICE and any other clients that enable ICE capabilities.

Nadella's post doesn't address the question of canceling its ICE contract, but states that "any engagement with any government has been and will be guided by our ethics and principles".

He said the company will continue to discuss the issues internally and with external stakeholders.

Many other top tech execs have also expressed concern over the impact to families and children of Trump's border policy.

Apple CEO Tim Cook called it "inhumane" while Google CEO urged the government to "find a better, more human way" of managing the US border.

Microsoft has found itself in a similar conundrum to the one Google faced after staff protested against its contract to provide AI to the Pentagon for rapidly detecting objects from military drone footage.

Google has said it will not bid to renew that contract and has since published a policy stating it will not develop AI for technologies that could cause harm to people.

Microsoft staff have also called on the company to develop and enforce "a clear policy stating that neither Microsoft nor its contractors will work with clients who violate international human rights law".

Google, Microsoft, Amazon: Are they responsible for government use?

Welcome to the world of politicized capitalism doused with hashtag activism.

The company had previously said it was "proud" to supply technology to US Immigration and Customs Enforcement -- and sparked anger online.