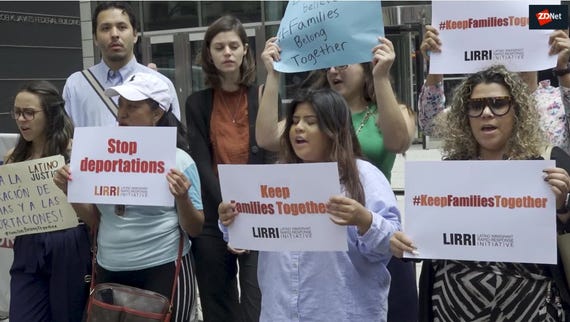 Video: Is cloud computing being politicized?

Cloud computing is being politicized in a hurry -- and how public relations, hashtag activism, and the technology buying process shakes out is going to be interesting to watch.

Rest assured that technology giants will be under increasing scrutiny if their cloud services are used for things that rile up the masses. Welcome to the world of politicized capitalism doused with hashtag activism.

The big question is what should we make of these developments? Should tech companies -- which are designed to make money by the way -- not sell to the government? Are tech companies responsible for the way their tools are being used? Or is this a social media driven uproar that can be ignored?

We've been discussing this at ZDNet, and there really aren't a lot of clear answers. In the spirit of outlining the debate, I'll show how this hashtag activism creates a dangerous precedent and Zack Whittaker will take the personal liberty side of the equation. Here's our take:

Larry Dignan: Much ado about nothing

The government -- and other technology consumers -- have used IT for things people disagree with forever. Drones, big data, AI, and the cloud are just recent examples of tools that are neutral. These technologies can be good or evil.

One thing is certain: Bitching about Microsoft, AWS or Google isn't going to stop the procurement chain. These large companies are easier targets that may cave at a little bad hashtag PR. Let's assume that all the cloud providers don't sell facial recognition or AI to the government. What'll happen?

Like any enterprise, the government will either build or buy software off cloud. Maybe the government builds its own cloud. Are those technology suppliers all inherently evil? Activists on surveillance are playing Whac-a-Mole. There are multiple facial recognition technologies available.

What is most concerning about this recent politicized technology buying trend is that it'll never end. Consider:

What has changed in recent decades is that the US government used to develop its own technologies that would eventually go commercial (think Internet). Now, the private sector simply innovates faster. That public-private partnership is now becoming political.

How tech vendors deal with these skirmishes will be insightful, but recent evidence may suggest a little pushback is warranted from the tech giants. Remember all that #deletefacebook chatter? Very few ditched Facebook. It's unlikely you'll stop using Google, Amazon and Microsoft wares just because the government is a customer.

In tech we trust? The reality is that we get little choice.

For years, the public-private partnership -- especially in the tech industry -- has been close. It wasn't so long ago HP bailed out the ailing Healthcare.gov and the government began embracing transparency by opening data and joining social platforms. Now, the private sector is sending top secret missions to space -- even if it doesn't always go smoothly.

Today, tech is becoming a partisan issue more than ever. In current and recent administrations, tech has been used for good. But can tech companies justify when their tech is used to do harm?

For one, technology is helping the government to make decisions that affect our lives. But that technology, often powered by complex algorithms, is locked down and closed source. We don't know how it works -- let alone if it even works. From facial recognition that can decide if a person is a threat to breathalyzers that can result in a conviction based on a flawed product, algorithms aren't perfect, yet they're capable of sending someone to prison. If we're subject to trial (or judgment) by machine, we have the right to know how it came to that conclusion.

But tech giants, motivated by profit, will resist disclosing their secret source to anyone.

We've seen that in cases where cell phone surveillance makers are forcing police departments to sign non-disclosure agreements, making accountability impossible. Police have dropped court cases and failed to prosecute criminals because of these restrictive agreements.

And if the government gets what it wants -- even at the expense of civil liberties -- public officials won't ask too many questions, either.

It's also a matter of privacy -- a constitutional right for all Americans. We should be able to walk down the street, or browse the web, without being watched or profiled by the government. Most people only think about their rights when they need them. Take the Edward Snowden leaks, which revealed the largest company-assisted government surveillance programs of a generation. Years later, the companies who once stood by their customers and demanded reforms to government surveillance are now profiting from the privacy-invasive services they've since built.

The only defense that tech companies have is that hypocrisy isn't a crime.

Americans aren't naive. Americans know that government surveillance is a fact of life. The tradeoffs between security and privacy are fraught with complications. And private companies don't work for the people, they work for profits.

Dignan and I agree on one thing: It's near-impossible for consumers to drop Amazon, Google, and Microsoft from their lives. Most tech firms make a fraction of their profit from consumers, anyway.

But nowadays, tech giants are only a tweet away from a public relations disaster. Investors are listening and companies are backing down.

Join Discussion for: Google, Microsoft, Amazon: Are they responsible...