As of June 29, Microsoft is no longer putting a hold on certain Surface devices that were blocked from getting the May 2020 Windows 10 Update. Or... is it? As of July 10, the block is still there.
Written by Mary Jo Foley, Contributor on July 1, 2020 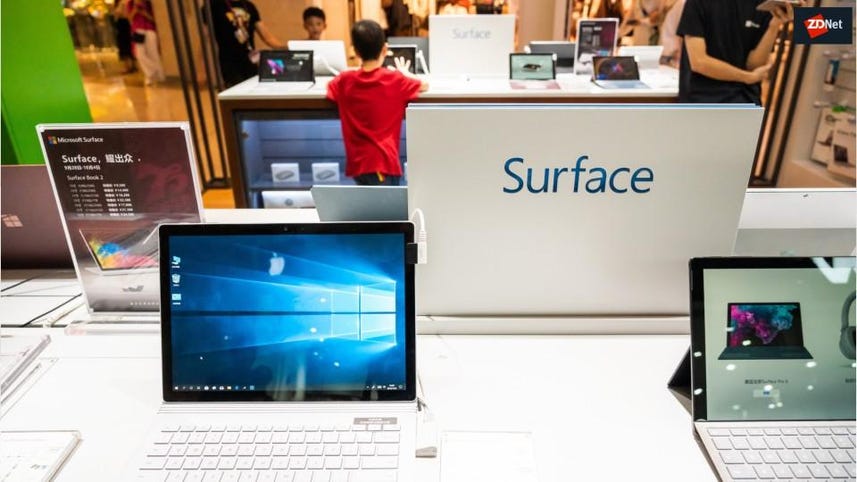 Microsoft is releasing the block it placed on some Surface devices to prevent them from updating to the Windows 10 2004/May 20202 update The block prevented users of certain Microsoft-made Surface models, including Surface Laptop 3 and Surface Pro 7, from manually downloading and installing Microsoft's latest Windows 10 feature update.

Update (July 10): Nope, not happening. Microsoft is still blocking Surface devices from getting the May 2020/2004 update after all.

According to Microsoft's Windows 10 release information for the May update, devices with more than one Always On, Always Connected capable network adapter could experience inadvertent shutdowns and restarts. The Surface Laptop 3 and Surface Pro 7 both fit into that category. (Some other Surface devices may, too; I've asked Microsoft for the list of devices affected but haven't heard back.)

Even though Microsoft patched this issue on June 9, Patch Tuesday, with KB4557957, Microsoft continued to impose the block. Sometime in the last day or two, however, the company updated its release information to note that the block was removed effective June 29. Microsoft officials noted that it may take up to 48 hours before the update to Windows 10 2004 will "be offered."  (Thanks to BleepingComputer.com for reporting on the change in wording on July 1.)

Update (July 5): Despite Microsoft's statement that the block was released on select Surface devices as of June 29, I still am not able to download Windows 10 2004 as of today, July 5, on my Surface Laptop 3. Other Surface users are reporting the same. I've asked Microsoft why the update is still not available, 120 hours after the stated release of the block. No word back so far.

Update (July 7) Still no release of the block for Windows 10 2004 on my Surface Laptop 3 or other blocked Surface devices, according to readers I'm hearing from. I've asked Microsoft twice more what's going on, given this was supposed to be unblocked within 48 hours as of June 29. Still no word back.

After announcing on May 27 that it was starting to make the May 2020 feature update available via Windows Update, Microsoft also released a list of about a dozen previously undisclosed issues, which potentially could cause problems for anyone applying the May Update. As of today, July 1, there remain a number of officially acknowledged, unresolved issues with Windows 10 2004.

Among the problems listed under "investigating" include an issue with older NVIDIA display adapters; stop errors when plugging or unplugging a Thunderbolt dock; issues during or after updating devices with Conexant ISST audio drivers; difficulty connecting to more than one Bluetooth device; and variable refresh rates not working as expected with Intel iGPU. There also have been issues with 2004 and Storage Spaces, Microsoft's RAID-like data protection software, which resulted in Microsoft putting a compatibility hold on 2004. (The Storage Spaces issue isn't listed on the Release Information page for some reason.)