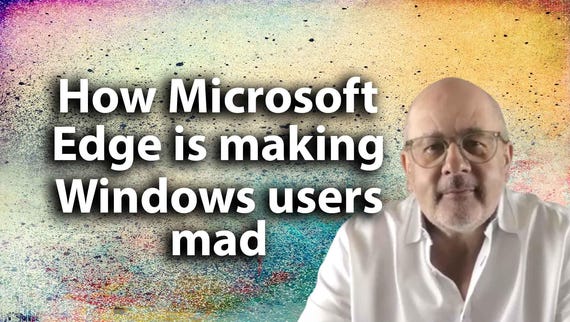 In the annals of brilliant sales techniques, Microsoft doesn't always get good reviews.

Even when it has a fine product to sell.

Over the last few weeks, I've been banging my head against several floorboards as I've listened to readers complaining about what they see as Microsoft's sneaky maneuvers. Specifically, concerning the new Edge browser.

This is a very good browser. It's like Chrome -- Redmond based it on the Chromium platform, after all -- but it's better.

Microsoft has, however, been annoying Windows 10 users by making it very difficult to ignore -- or even eliminate -- Edge. Some believe Edge is stealing their Chrome data.

Even those still on the terminal Windows 7 system are annoyed.


One reader even described Edge as malware because of the way Microsoft tried to force his wife's Windows 7 system to adopt its new browser.

Or you might think there's something of a gap between those who know how to handle these things, those who really don't care or notice and those who simply get annoyed because they're more prone to it. (It even happens to me on occasion.)

Microsoft's latest Edge step, I fear, pandered to the last group. The company offered a discreet update on its support pages.

I wanted to believe someone was having trouble ridding their system of this -- for them -- unwanted browser and was seeking help. But no, this was an announcement from the company.

It began with hope. Microsoft explained it was migrating all Windows users from the old Edge to the new one.

Those prone to annoyance would cry: "What does it take not only to force a product onto a customer but then make sure that they can never get rid of that product, even if they want to? Even cable companies ultimately discovered that customers find ways out."

Yet, as my colleague Ed Bott helpfully pointed out, there's a reason you can't uninstall Edge. Well, initially. It's the only way you can download the browser you actually want to use.

You can, therefore, hide Edge -- it's not difficult -- but not completely eliminate it from your life.

Actually that's not strictly true either.

The tech world houses many large and twisted brains. They don't only work at Microsoft. Some immediately suggested methods to get your legacy Edge back on Windows 10. Here's one way to do it.

Moreover, should you want to meet Microsoft's force with an equal and opposite force, there are ways to make the new Edge disappear. Here's one that's best attempted by those with more than a few computer skills.

Good people do bad things. Good companies do terrible things. I still worry that Microsoft has gone about launching Edge in a painfully imperfect manner. It's not sufficiently emphasized the delights of its new browser -- which are palpable. Instead, it's using a little (too much) brute muscle.

Why not charm people into trying Edge with Windows 10? Telling them they can't uninstall it isn't charming. Why not entice users to use Edge for a week and see if it's an improvement on their existing browser? If you have confidence in your new product -- and Microsoft should have -- show it.

This isn't to say Microsoft is universally awful. I'm fascinated, for example, by the Surface Duo, Microsoft's new folding iPadophone. And how can one not admire Redmond's attempt to save the children of America by buying TikTok?

Yet the strategy with Edge is clear. Microsoft wants to expand market share in a hurry. It wants a big bite of Chrome, which is now known to be a slow memory hog. It also wants to decimate the very good people at Firefox.

Is it any coincidence, for example, that Mozilla, makers of the far more public-spirited browser, announced 250 layoffs last week?

Ultimately, Microsoft -- and it's not the only tech company to think this way -- seems to believe that most people won't care, won't pay attention and many will happily try the new Edge without even knowing it.

In this, Microsoft may be entirely correct.

Join Discussion for: Microsoft tells Windows 10 users they can...