Software giant says it is establishing its first cloud data centre region in Taiwan, where it will also make "a significant investment" to help develop digital skills for 200,000 individuals by 2024.
Written by Eileen Yu, Contributor on Oct. 27, 2020 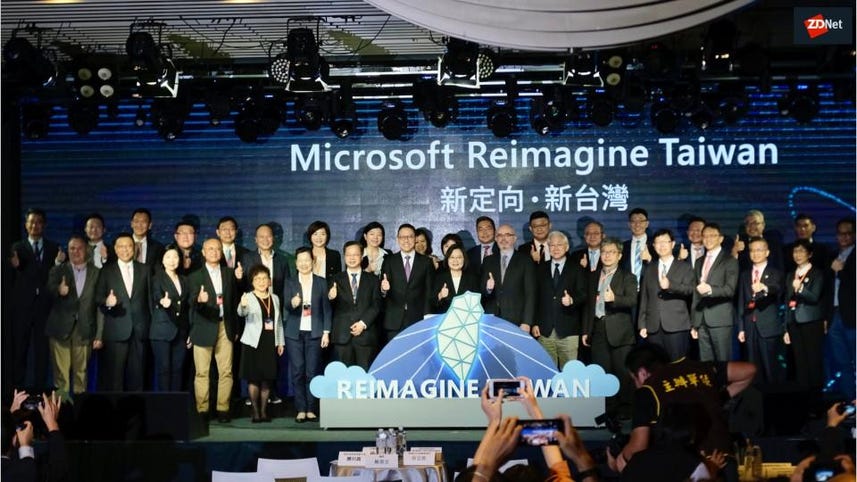 Microsoft is making plans to set up a cloud data centre region in Taiwan, where it is planning a "significant investment" to help develop digital skills for more than 200,000 individuals by 2024. The US software giant is also looking to expand its Azure hardware engineering team, tapping the market as an Asian design hub.

The new cloud data centre region would be its first in Taiwan and part of a global network of 66 cloud regions, Microsoft said in a statement Tuesday. When operational, it would deliver Microsoft Azure with Microsoft 365, while Dynamics 365 and Power Platform services would be added to the mix later.

Asked about investment figures, Microsoft told ZDNet it could not reveal details about the size of its investment in new data centre locations.

It also would not share specifics when asked if it currently had data centres or planned to build any in Taiwan, or how many data centres its new region would encompass. It would only say that the company "intends" to build "scalable and resilient" infrastructure to support the needs of its customers in the market. It did add that more details about the new region would be revealed in the future.

In its statement, Microsoft did say the Taiwan region would include Availability Zones, which are physically separate locations within an Azure region, each comprising of at least one data centre equipped with its own independent power, cooling, and networking.

To ensure resiliency, a minimum of three separate zones are established in all enabled regions, a move that Microsoft has said aims to safeguard applications and data from datacentre failures. A Southeast Asia Azure Availability Zone, served out of Singapore, was launched in December 2018.

The software vendor told ZDNet it currently operates and has announced 19 Azure regions, including the "Taiwan data centre".

In Taiwan, Microsoft added, it worked with local companies such as Acer, Chunghwa Telecom, Taiwan Semiconductor Manufacturing Company, and Trend Micro to build customised applications for their customers. The software vendor added that its local region would support more than 90 compliance certifications, to meet industry and regulatory standards under Taiwan's executive branch of government.

When asked, it would not say how many customers were supported on its local cloud data centre, noting only that more details would be announced in the future.

"What we can share right now is that cloud is creating new business opportunities that will help support economic recovery. Building the datacenter region in Taiwan is timely as it will continue to accelerate the digital transformation journey of businesses and organisations," the Microsoft spokesperson told ZDNet. "The [Taiwan] data centre region will enable private and public sectors to further embrace innovation through our cloud products and services.  More specifically, Microsoft Cloud in Taiwan will help customers to meet local data residency requirements within Taiwan, especially for highly regulated industries such as healthcare, financial services and public sector."

The local facility would also be part of Microsoft's aim to be carbon negative by 2030, fully tapping renewable energy for its data centres by 2025.

In addition, the US company said it has plans to expand its Taiwan Azure hardware systems and infrastructure engineering team, but gave no details on how many new hires would be made. It did say that its local outfit would serve as "a hub in Asia for innovation" in designing and building cloud software and hardware infrastructure, including artificial intelligence (AI), Internet of Things (IoT), and edge products.

Microsoft also unveiled it was targeting to arm at least 200,000 individuals in Taiwan with digital skillsets over the next four years, offering skills acquisition programmes for youth, non-profit organisations, startups, and enterprises. It added that it would work with major universities to upskill business leaders, entrepreneurs, and C-level executives through the AI Business School programme as well as with industry associations to introduce reskilling workshops for women.

According to the software vendor, its investments in Taiwan -- where it had a 30-year history -- include an IoT innovation centre, AI research and development centre, and a startup accelerator.

Microsoft Taiwan's general manager Ken Sun said: "Providing access to scalable, low-latency, and secure cloud services will equip Taiwan's public and private sectors with the latest AI and IoT technologies, while meeting the highest cybersecurity, data residency, and compliance standards. Microsoft is committed to fuelling innovation and economic growth in Taiwan as it transforms into the next Asian technology hub."

Microsoft's executive vice president and president of global sales, marketing, and operations, Jean-Phillippe Courtois, added: "Our new investment in Taiwan reflects our faith in its strong heritage of hardware and software integration. With Taiwan's expertise in hardware manufacturing and the new data center region, we look forward to greater transformation, advancing what is possible with 5G, AI, and IoT capabilities spanning the intelligent cloud and intelligent edge."