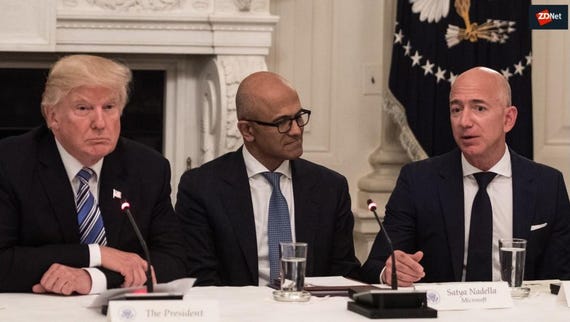 After several postponements, delays, and challenges, the US Department of Defense has awarded Microsoft the $10 billion Joint Enterprise Defense Infrastructure (JEDI) contract. The news of the award broke late Friday, Oct. 25.

Throughout much of the bidding process, Amazon was expected by many to be the triumphant bidder. In the later rounds, Amazon and Microsoft emerged as the two final bidders in the winner-take-all deal. (Google dropped out of the JEDI bidding late last year, while Oracle and IBM were eliminated earlier this year. ) But in August this year, the Pentagon said it was putting the JEDI contract on hold after US President Donald Trump complained about potential conflicts of interest in the process. Amazon CEO Jeff Bezos has been targeted by Trump as a political thorn because of his ownership of The Washington Post.

The JEDI contract is designed to upgrade legacy systems with newer cloud services. The JEDI Cloud will provide "enterprise-level, commercial IaaS (infrastructure as a service) and PaaS (platform as a service) to the Department and any mission partners for all Department business and mission operations," the government said. The contract is expected to be worth up to $10 billion over 10 years.

According to the DoD press release about the Microsoft JEDI award:

"Today the Department of Defense has taken another step forward in the implementation of our Cloud Strategy with the award of an enterprise general-purpose cloud contract to Microsoft. This continues our strategy of a multi-vendor, multi-cloud environment as the department's needs are diverse and cannot be met by any single supplier. This contract will address critical and urgent unmet warfighter requirements for modern cloud infrastructure at all three classification levels delivered out to the tactical edge."

The release cites the DoD's past two years of awarding various cloud contracts to various bidders.

The base contract period for JEDI is two years with a $1 million guarantee, the DoD press release says.

"The department projects that user adoption will drive an estimated $210 million of spending during the two year base period. The DOD will rigorously review contract performance prior to the exercise of any options," the press release adds.