Finland has seen a host of datacentre announcements recently, but the latest one has a deeper twist. Finnish-Israeli cloud startup Aiber Networks is taking its datacentre plans underground and building a high-security facility in a military grade cave in Tampere, central Finland.

"Our main offering is to serve a full stack of IT services to any company that develops web and mobile applications and cloud platforms," says Pekka Järveläinen, CEO of Aiber Networks. "We specialise in high security and high availability IT services and provide [the most stringent] Tier 4 level datacentre space." 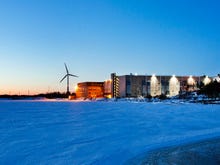 The company's datacentre will be located at a former airplane manufacturing site of a government-owned Finnish aviation company. The site was built in the Härmälä district in 1932 and is based on military standards. The underground cave was used after the second World War to build heavy machinery Finland delivered to the Soviet Union as part of war reparations.

Now the disused cave will see a very different life as Aiber Networks, which started operations only a few months ago, converts it into a 1,300 square metre data facility.

The company has raised €2m in initial funding to build the datacentre, but estimates a total investment of between €50m and €100m will be needed to use the entire Härmälä site.

The cave consists of three tunnels, which can all be used as individual data halls. In total the cave can fit between 200 and 300 racks, each with the capability to support high-density power loads of up to 50kW. The maximum capacity of the datacentre will be around 4MW and, while this is average in datacentre terms (for comparison Sonera's new multi-tenant datacentre, the largest in Finland, will have a capacity of 30MW), Järveläinen believes it to be plenty:

"We don't do colocation, that is, rent rack space, except for strategic customers, which means we won't have inefficient servers," Järveläinen says. "If there are 7,000 virtual servers per rack and 200 racks that amounts to 1.4 million servers."

Predictably Aiber Networks sees security as its main differentiator. According to Järveläinen, the most fault tolerant Tier 4 level datacentres are still rare globally and typically used by governments, telcos, and large enterprises who seldom rent their capacity the others.

The Härmälä cave will open in early November, but is already joined by a smaller underground datacentre Aiber Networks rents in central Tampere. Having two facilities is one of the key elements of ensuring their security and availability.

"All data in the Härmälä centre will be mirrored in real time with our current datacentre in Tampere. Furthermore Härmälä has three tunnels which will all be mirrored in real time so there is triple backup on that end alone," Järveläinen says. "Naturally we also use modern virtual platforms and a variety of cloud service automation software to ensure high availability."

Revealing the datacentre location could be seen as a security risk, but the company believes the protection provided by the military grade cave is more than sufficient.

"We sell a public service so the location would have to be revealed in any case at some point. The physical security of Härmälä is on such level that you can't get through even with a truck full of explosives," Järveläinen says. "However, we won't publish the location of our other facility in Tampere."

Despite the secrecy, security and unusual locations, Aiber Networks highlights both its centres will be energy efficient. The Härmälä site will mostly use free cooling thanks to its underground location and Finland's mild climate, but it also has access to lake water, geothermal and district cooling. Meanwhile waste heat can be used by nearby residential areas.

Aiber Networks said it has already secured its first international customers and is in discussions with several teleoperators. Initially the company will be targeting security conscious customers in the Nordics, Israel and Russia. The latter is expected to be a significant customer for Aiber.

"This is the safest route to East. We are almost in St. Petersburg's local network, it takes six milliseconds to reach St Petersburg and 10 milliseconds to Moscow so we can easily offer services to major cities in Russia," Järveläinen says.

Join Discussion for: What do you do with an old military cave?...