I had a chance to briefly use both devices before the announcement. Below are my first impressions, specs, and other details about the devices.

The Galaxy Tab S3 is powered by Android 7.0 and now comes with an S-pen for jotting notes and sketching on the screen. Samsung also announced a new keyboard for the Tab S3, available as an additional purchase.

Specifications of the Galaxy Tab S3:

With Android 7.0 installed on the Tab S3, Samsung adopted Google's multi-window mode, and quick app switching, in lieu of the company's previous TouchWiz solution. That's not to say the Tab S3 runs stock Android; from the moment the Tab S3 it's apparent this is a Samsung device, with the more refined look (as seen on the S7 running Android 7.0 Nougat, as well as the Note 7 from last year).

Samsung Cloud, a backup and storage solution we first saw on the defunct Galaxy Note 7, makes its way to the Tab S3 as well.

There are two variations of the Galaxy Book, with the main differences found in processor and screen size.

Specifications of the Galaxy Book models:

Taking design queues from the Tab S3, the Galaxy Book has an all-metal housing and a premium feel. It's heavier than I expected, but it's not too heavy to act as a travel tablet/laptop replacement.

Samsung is including a keyboard and S-Pen with each Galaxy Book.

The S-Pen on both the Tab S3 and Galaxy Book is bigger than the S-Pen users are accustomed to using with the Note smartphone line. It's roughly the same size as a standard pen or pencil.

Samsung expects users to use the S-Pen on a bigger screen for lengthy notes and sketch sessions, and wanted users to feel comfortable while using it.

I tested the S-Pen on both tablets and found it to be responsive and feel naturally to hold and use. The added touch of having Air Command features, even on a Windows 10 device, making it easy to quickly jot notes or annotate screenshots is something I find intriguing and useful.

For those who love animated images, or GIFs, you'll be happy to hear both the Tab S3 and Galaxy Book offer a quick GIF creation tool with the S-Pen.

All of the tablets Samsung announced on Sunday feature a Pogo connector for use with an external keyboard. Through this connector the keyboard accessory gains power and connectivity, meaning the keyboards themselves are free of a battery or Bluetooth radios. In turn, the size and weight of the keyboards are reduced.

The keyboard for the Galaxy Book also features a trackpad, but unfortunately, I didn't get to thoroughly test it. The keyboard itself offered little key travel, and was spacious. For someone who is coming over from a Surface Pro or Apple keyboard, it seemed like using Samsung's keyboard would be a natural transition.

Samsung didn't announce exact pricing for the Tab S3, but it would make sense for it to be priced around the same $500 price point as the Tab S2 here in the US. Availability is also a mystery at time of writing.

Samsung has yet to announce pricing and availability dates for the Galaxy Book. 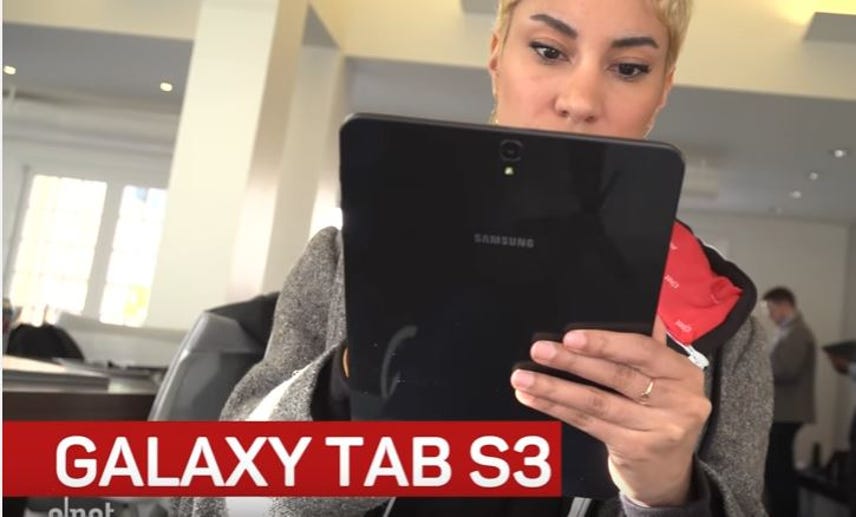