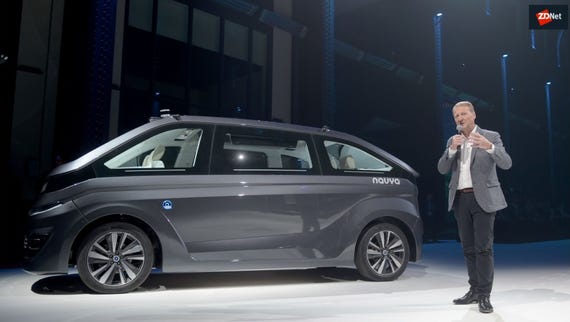 Perth has been chosen to host a trial of electric-powered autonomous vehicles next year.

Run by the Royal Automobile Club (RAC) of Western Australia and the Western Australian government, the trial will test Navya's "Autonom" vehicles in "a closed and controlled environment" from April next year.

Until then, the state government and the RAC will explore locations for the initial trial and a potential on-road public trial later on.

Perth is one of three cities picked for trials of the new type of electric vehicle. The vehicles will be bookable through a smartphone app once rolled out, according to RAC WA, similar to ride-sharing services such as Uber.

"The autonomous vehicle revolution is coming and WA has the potential to be at the cutting edge of this new technology," said WA Innovation and ICT Minister David Kelly. "High-tech new industries such as autonomous vehicles will be a source of the jobs of the future, and I want to ensure this state is well-placed to take advantage of these new opportunities."

The government also said it is continuing to work on other automated vehicle trials, including an automated bus on Curtin University campus and RAC's staged trial of a driverless, fully electric shuttle bus on Perth roads.

In Victoria, the "Autonobus" is driving students around La Trobe University campus as part of a trial until July 2018. It uses 360-degree cameras and sensor systems to detect objects and runs a set route based on map coordinates.

Also in Victoria, Transurban is currently conducting a driverless vehicle trial in Melbourne over the course of 18 months; while in NSW, the state government is undergoing a two-year trial of a driverless shuttle bus at Sydney Olympic Park.

The South Australian government also launched a AU$2.8 million trial of driverless shuttle buses in March, similar to the RAC Intellibus. Darwin, meanwhile, has entered its second phase of a driverless bus trial, although with a driver still on board for safety.

Not all automated vehicle trials have gone completely smoothly, however; earlier this month, a driverless shuttle bus had a collision with another vehicle less than two hours after it was launched in Las Vegas.

In March, Uber halted its self-driving vehicle tests in the US following a collision in Arizona; while Google's self-driving car was found to be at fault when it struck a public bus in California early last year.

GM plans to merge Strobe with its Cruise Automation unit.

Driverless trucks are coming -- but for now, adoption is in the slow lane

Safety issues might keep industries such as oil and gas from embracing autonomous delivery vehicles.

The Bay Area is the new testbed for a fleet of driverless taxis.