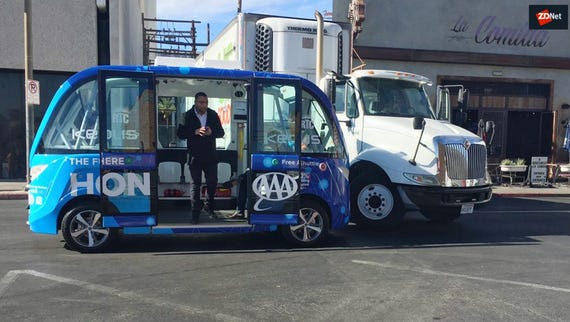 A driverless shuttle bus crashed less than two hours after it was launched in Las Vegas on Wednesday.

Ford: Self-driving cars are five years away from changing the world The technical leader of Ford's autonomous car project speaks about what it's like to be driven by a driver-less car, and how big a deal self-driving vehicles will really be.

The city's officials had been hosting an unveiling ceremony for the bus, described as the US' first self-driving shuttle pilot project geared towards the public, before it crashed with a semi-truck.

According to the Las Vegas Review-Journal, the human driver of the other vehicle was at fault, there were no injuries, and the incident caused minor damage.

The oval-shaped shuttle -- sponsored by AAA, the Review-Journal added -- can transport up to 12 passengers at a time. It has an attendant and a computer monitor, and uses GPS and electric curb sensors instead of brake pedals or a steering wheel.

The crash follows the US House passing the Self Drive Act in September, which if passed by the Senate would exempt car manufacturers from various federal and state regulations, allowing for the eventual deployment of up to 100,000 test vehicles a year.

Under the Act, states would still decide whether or not to permit self-driving cars on their roads. However, the federal government could permit a car manufacturer to bypass certain federal safety rules, as well as some state regulations.

The Las Vegas crash is not the first time self-driving vehicles have been involved in a collision. In March, Uber halted its self-driving vehicle tests in the US following a collision in Arizona. An Uber spokesperson later said all tests had been paused for the ride-hailing service to complete an investigation.

Google's self-driving car was found to be at fault when it struck a public bus in California early last year. The company said that it would improve software for the vehicles to more accurately differentiate larger vehicles such as buses. Its self-driving car unit Waymo also recently patented a way to make vehicles softer as part of efforts to reduce collision-related injuries.

Tesla's Autopilot feature was engaged when the driver of a 2015 Model S was killed in an accident in Williston, Florida in May last year. The National Highway Traffic Safety Administration (NHTSA) opened an investigation into the performance of the feature, although it later found no defects in the its design or performance.

Car manufacturers around the world are still investing in autonomous vehicle efforts. Volvo plans to involve every-day drivers in its "Drive Me" pilot on the streets of London in December; while Intel's Mobileye is building more than 100 level 4 SAE vehicles, which it will test in the United States, Israel, and Europe starting this year.

General Motors last month announced its acquisition of LiDAR developer Strobe to accelerate the development of its autonomous vehicle tech; Toyota last year opened a research institute with a focus on fully autonomous driving; and Audi announced its partnership with Nvidia earlier this year with the aim to bring level 4 autonomy to the roads by 2020. Level 4 vehicles are "designed to perform all safety-critical driving functions and monitor roadway conditions for an entire trip," according to the Department of Transport (DOT).

Nissan, BMW, and Hyundai are all looking to have driverless vehicles on roads within the next five years, which is also the amount of time Ford believes driverless cars will take to "change the world".

In Australia, Transurban is currently conducting a driverless vehicle trial in Melbourne over the course of 18 months; while the NSW government kicked off a two-year trial of a driverless shuttle bus at Sydney Olympic Park back in August.

The Royal Automobile Club (RAC) of Western Australia kicked off Australia's first driverless electric bus trial last year with support from the state government and the City of South Perth.

The vehicle, known as the RAC Intellibus, is able to carry up to 11 passengers and operates at an average speed of 25 kilometres per hour. It uses light detection and ranging, stereovision cameras, GPS, odometry, and autonomous emergency braking to detect and avoid obstacles.

The South Australian government also launched a AU$2.8 million trial of driverless shuttle buses in March, similar to the RAC Intellibus; while Darwin has entered its second phase of a driverless bus trial, although with a driver still on board for safety. According to the ABC, more than 3,500 passengers had ridden the bus from the beginning of the trial in January up to June.

A day after a crash involving an autonomous car, Singapore's transport authority announces plans to test self-driving buses and conduct research to improve real-time monitoring of the country rail network.

IBM has teamed up with Local Motors for a new autonomous vehicle. Here's how it will handle difficult passengers -- and why you won't be able to buy one.

The v8.1 update on 'second generation' Teslas brings major improvements to Autopilot. Here's why it's an important step towards delivering fully autonomous vehicles.

The Pew Research Center recently found that many US adults believe most cars will be driverless in the future, but they still won't ride in them.