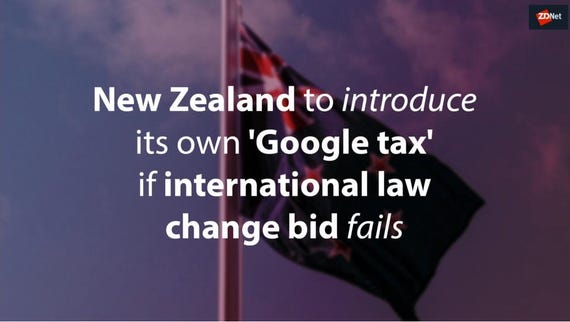 The New Zealand government is looking to "more effectively" tax the digital economy, specifically hoping to fix the problem of multinational digital companies conducting substantial business in the country but paying no tax on income or revenues.

Publishing a discussion document [PDF] on how the nation should tax multinationals, the New Zealand government has highlighted two possible ways this could be done: The first is to attempt to get other nations on board to change international income tax rules and the second is to apply a separate tax to certain digital transactions.

In a joint statement, Finance Minister Grant Robertson and Revenue Minister Stuart Nash said the second option, a digital services tax (DST), would be targeted at certain highly digitalised business models. The pair said it would not apply to sales of goods or services, but to digital platforms that depend on a base of users for income from advertising or data.

"We need to protect our economy and the integrity of our tax system. Modern business practices, digitalisation in particular, mean that a company can be significantly involved in the economic life of a country without paying tax on income or turnover," the statement said.

As outlined in the discussion document, the DST would apply to platforms which facilitate the sale of goods or services between people, such as Uber, Airbnb, and eBay; social media platforms like Facebook; content sharing sites like YouTube and Instagram; and companies which provide search engines and sell data about users.

SEE ALSO: Australia wonders how to tax companies cashing in on user-generated content

The DST would tax the gross turnover of certain "highly digitalised" businesses at a rate, for example, of 2-3%.

The DST will likely also apply to some New Zealand companies, in order to comply with international obligations.

"We expect the impact of this to be limited in practice, because of the kinds of activities to which a DST applies," the discussion paper says.

"The DST is an interim measure for taxing the digital economy. The government would look to repeal it if and when the OECD's international solution was implemented."

There are two OECD measures in the government's proposal: A measure to allocate greater taxing rights over a multinational's digital-only profits to market countries, which would not require the multinational to have a physical presence in the country; and the second, a "minimum tax measure", which would apply beyond the digital economy.

"The significance of the digital economy is only going to grow over the coming decades. We need to keep adapting to ensure multinationals who do business here are paying their fair share of tax," the statement says.

Over the ditch, the Australian government legislated a Diverted Profits Tax (DPT) in March 2017, which is intended to prevent the practice of multinational organisations shifting profits made in Australia offshore to avoid paying tax.

The DPT hits multinationals with global revenue of more than AU$1 billion and Australian revenue of greater than AU$25 million with a 40% tax on all profits.

The legislation mirrors laws implemented in the United Kingdom, nicknamed the Google Tax after the search engine giant was ordered to pay the UK government £130 million in back taxes.

Join Discussion for: New Zealand to introduce its own 'Google...