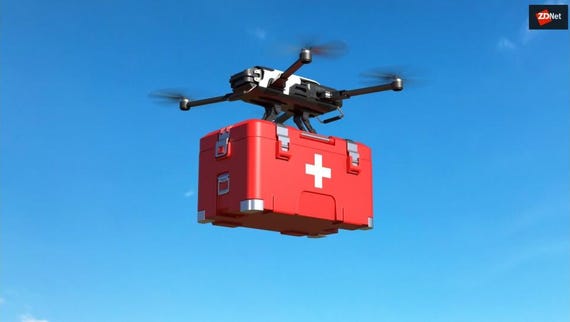 The Northern Territory government, iMove Cooperative Research Centre, and Charles Darwin University (CDU) have announced plans to trial the use of drones for delivering healthcare services to remote communities across the state.

The project, to be funded by all three parties, will initially investigate the logistical challenges of using drone technology to deliver health services in NT, including integrating drones into the current health transport infrastructure network, procuring airframes capable of withstanding the territory's wet and dry seasons, and developing drones with a maximum range of 250 kilometres.

The investigative work will be carried out by a team at CDU, which is being led by associate professor Hamish Campbell.

"The team at CDU will investigate the potential in using automated aircraft for the delivery of time-critical medical items to remote communities across the Northern Territory," CDU interim vice-chancellor and president Mike Wilson said.

"Drones are already being used in healthcare in developing countries, however, we need to undertake research to understand where they can reduce costs and improve health care outcomes for remote communities in the Northern Territory."

Drone services consultants Hover UAV has also been brought on to play an advisory role in the project.

iMove programs director Lee-Ann Breger believes the project could pave the way for the delivery of essential healthcare services, such as cold-storage COVID-19 vaccines, to remote communities, Eventually, iMove would like to see a drone health delivery system be rolled out to other regional locations across Australia, Breger added.

"There are about eight million people living in rural and remote parts of the country -- that's about a third of our population living in places where getting life-saving medical supplies is not only a race against time, but also a battle against the tyranny of distance, harsh landscapes, and unpredictable elements," she said.

"Regional communities face medical access and health supply issues. This doesn't have to be the case. We have the technology to put an end to this deprivation, especially in remote Northern Territory First Nations communities."

Similar work is being carried out by Australian-based Swoop Aero, which is working in partnership with USAID Global Health Supply Chain, UK Aid, and UNICEF, to provide medical supplies including vaccines for malaria and tuberculosis, penicillin, anti-malarial and anti-venom medications, and HIV/AIDS testing kits from healthcare centres to remote villages in Malawi using its drones. On the return trip, the drones are also often carrying tests for tuberculosis and other blood samples.

Swoop Aero CEO Eric Peck previously told ZDNet that the company hopes it can provide the same service to rural and remote parts of Indonesia and Australia, especially in Indigenous communities.