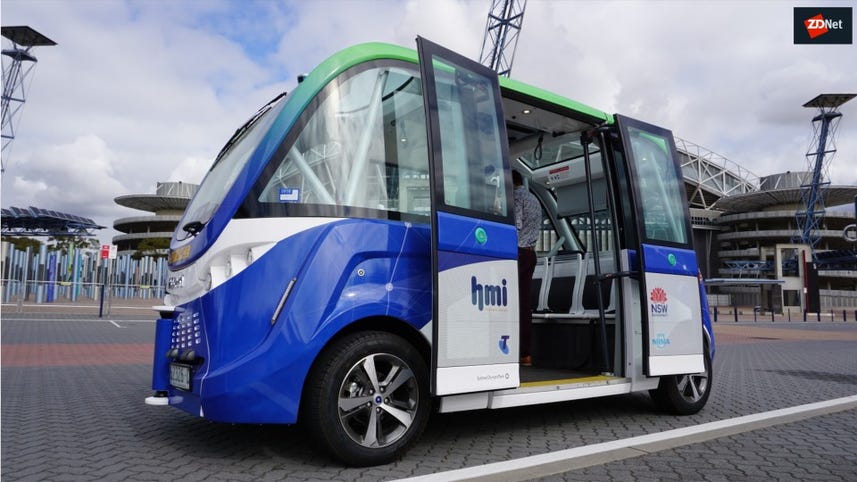 The New South Wales government has welcomed the first passengers on its Driverless Smart Shuttle at Sydney Olympic Park, with the service set to officially start next week, marking stage two of the state's driverless trial.

Through its Smart Innovation Centre -- a hub for the "collaborative" research and development of safe and efficient emerging transport technology -- the NSW government in August last year partnered with HMI Technologies, NRMA, Telstra, IAG, and the Sydney Olympic Park Authority to conduct a two-year trial of the shuttle.

Legislation was passed alongside the formation of the hub to approve trials of automated vehicles. The hub has since added the University of Technology Sydney.

The legislation allows government to partner with industry, researchers, and universities to be a testing ground for automated vehicles, with the trial touted as bringing driverless cars a step closer to reality in Australia.

"We know self-driving cars will play a major role in the future and that's the future we're preparing for right now," Minister for Transport and Infrastructure Andrew Constance said on Wednesday.

"The ultimate goal of this landmark trial is to find the best way to harness the next generation of driverless technology and how to make it work for the people of NSW."

The Navya shuttle is considered a level four, highly autonomous vehicle designed to carry up to 12 passengers. It can travel up to 40kmph in autonomous mode, with features including front and rear cameras, LIDAR, GPS technology, and autonomous emergency brakes.

See also: Moving from planes, trains, and automobiles to 'mobility-as-a-service': A peek into the future of transport in Sydney

The government expects the shuttle will continue to operate on Olympic Boulevard, with members of the public able to book rides over the coming weeks, before the trial progresses to stage three in early 2019.

The third stage shuttle trial will focus on servicing parts of the Sydney Olympic Park precinct by testing a variety of uses, including transporting office workers, residents, and other precinct workers, the government explained.

"We want to use the trial to help develop the systems that will enable automated vehicles to be connected to our infrastructure, like traffic lights and to our customers through their devices and applications," Constance continued.

The state announced in July two new regional locations for its driverless vehicle trial, with Coffs Harbour and Armidale slated to host fully-automated shuttles before the end of the year.

The trial will run for 12 months in three phases that the government said will have gradually increasing levels of operational complexity in real-world environments.

The first phase will comprise a shuttle service connecting Coffs Harbour International Marina and Muttonbird Island; phase two will see the shuttle move to Marian Grove Retirement Village; and phase three will operate on Harbour Drive in Coffs Harbour CBD, and will be used to transport people between precincts and transport links.

NSW also kicked off the trial of automated vehicles on Sydney roads in March.

Working with motorway operator Transurban and car manufacturers to develop the automated technology, the vehicles have been running on the Sydney orbital network including the Lane Cove Tunnel, The Hills M2 Motorway, Westlink M7, the M5, and the Eastern Distributor, taking also to the Sydney Harbour Bridge and the harbour tunnel.

The automated cars have adaptive cruise control and automatic braking and can read traffic signs and remain within their lanes.