Kiwi telcos to get access around two years' worth of spectrum before longer-term access begins in November 2022.
Written by Chris Duckett, Contributor on Dec. 15, 2019 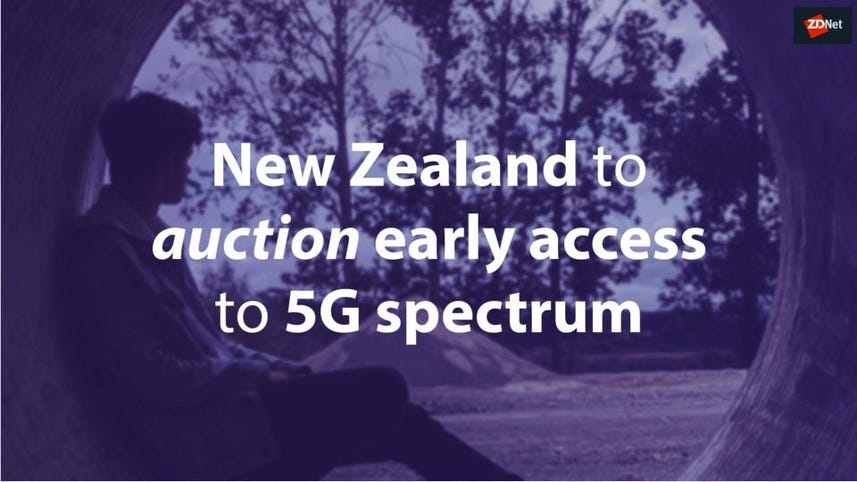 The New Zealand government has said it will open access to the unused half of the country's 3.5GHz band via an auction next year.

Winners at the auction, where 160MHz of spectrum will be open for bidding, will gain rights to the purchased spectrum from mid-2020 until 31 October 2022, before it switches across to long-term rights that will be gained via another auction.

"Early access to this spectrum will allow the telecommunications industry to move forward in their development and deployment of 5G services now, rather than waiting until long-term rights are switched on in November 2022," Minister of Broadcasting, Communications and Digital Media Kris Faafoi said.

"Progressing with 5G will ensure New Zealand keeps pace with global developments, give us world-class connectivity, and provide a platform for exciting new applications which can improve future livelihoods and ways of life."

In the forthcoming auction, there will be a limit on the amount of spectrum that operators will be able to purchase. Operators will also be required to return any spectrum in the 3.5GHz band and will have minimal use terms applied to them.

There will also be no guarantee that short-term rights will provide long-term access, the government said.

Faafoi added that an allocation would be made to Māori in conjunction with the creation of a support program to help "build Māori capability in spectrum-related industries".

"The short-term allocation of spectrum to Māori will act as a stepping-stone for Māori and the Crown to reach an enduring agreement which recognises Māori interests in radio spectrum," Faafoi said.

New Zealand telco Spark welcomed the government's announcement and said it would be taking part in the auction.

"Access to sufficient spectrum in the 3.5 GHz band will enable Spark to bring true mass-market 5G services to more New Zealanders as soon as possible," the telco said.

A recent study by the New Zealand Commerce Commission said the country did not need a fourth mobile operator, following the rise of 2degrees.

In May, Vodafone New Zealand was sold to NZ-based infrastructure investment company Infratil and Canada-headquartered Brookfield Asset Management in a deal costing the two buyers a total of NZ$3.4 billion.

Vodafone NZ signed up with Nokia to deploy its 5G network in August.

In November last year, the NZ Government Communications Security Bureau banned the use of Huawei equipment for 5G deployments, following a trial undertaken by Spark and the Chinese giant.

"The Director-General has informed Spark today that he considers Spark's proposal to use Huawei 5G equipment in Spark's planned 5G RAN would, if implemented, raise significant national security risks," Spark said at the time.

"This means Spark cannot implement or give effect to its proposal to use Huawei RAN equipment in its planned 5G network."

Fibre providers in New Zealand will need to disclose profits, quality of service, and expenditure from 2022.

5G will be launched in Auckland, Wellington, Christchurch, and Queenstown later this year.

Increasing reliance on software will increase exposure, and countries will have increased risk from trusting a single vendor.

5G takeover: The next-gen network will cover 65% of the global population by 2025 (TechRepublic)

When is Amazon's Prime Early Access Sale? Plus how to find the best deals

When is Amazon's Prime Early Access Sale? Plus how to find the best deals