There's a tipping point that occurs when unpacking after a move. For a long time, everything is missing. Boxes serve as side tables, dinner tables, and the stuff of nightmares. But, eventually the sea of boxes gives way to something resembling reconstruction -- and that's when you start finding stuff -- like our Mac Minis.

I've taken these wonderful little machines for granted, but having been without them for three months, I became newly aware of just how convenient and special they are to our daily workflow.

Unique benefits of the Mac Mini

The Mac Mini is a unique member of Apple's line-up. Unlike Apple's more mainstream products consisting of its hugely popular laptop line and strong-selling iMac line, the Mac Mini (and ill-fated trash can Mac Pro) are the only machines that don't encumber buyers with Apple's choice of display. This allows it to be used in a wide range of configurations, from server racks to entertainment centers, to car computers, that just aren't a good fit for iMacs or laptops. 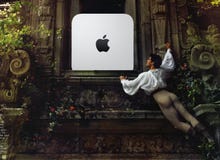 Why my Mac Mini romance is over

It was the perfect combination of compactness, just enough processor power and upgradeability that made it an excellent value for many Mac users. But now I can't recommend it anymore.

But, unlike the Mac Pro, the Mac Mini is also reasonably affordable. It starts at $499, and even in its most fully-equipped model with all of Apple's overpriced upgrade fees, it tops out at $2,000.

Now, there are some disadvantages. The Mac Mini doesn't use the fastest processors available, RAM maxes at 16GB, and the built-in video is not much better than meh. That's why I still have an iMac as my video production machine, even though I don't like the iMac's screen and yearn for an ultra-wide monitor (which, sadly, my 2013-vintage iMac won't support).

The other big disadvantage is Apple's seeming lack of support for the platform. The last update was in October of 2014, fully three years ago, and it arguably wasn't quite as good as the 2012-series Mac Minis I have populating my space.

That said, the Mac Mini is incredibly versatile. As I come up on four years running the same main desktop machine, I've looked at replacing my iMac with a new iMac model or even with the iMac Pro, but I just don't want to be saddled with that display. I'd much rather pay three thousand bucks for a muscled-up Mac Mini than figure out how to turn the ultra-expensive and heavy iMac display into some side monitor.

Oh, and for all you Windows folks, yes, I know about the NUC and many other Windows-based small form-factor PCs. They are also excellent machines. I'm sticking mostly with Macs because I have specific MacOS software I run that doesn't exist on the other platform, and all my Macs, from the iMac and MacBook Pro to my small army of Mac Minis, run both Windows and Mac apps, making the MacOS platform far more versatile for my needs.

Trust me. If I didn't need and benefit from MacOS-based applications, choosing Windows machines would give me far more choice and, in many cases, be less expensive.

The question for most of us Mac Mini champions (and we're out there, we really are), is whether there will be an update any time soon. A letter with Tim Cook seems to hint there will be, so there is some hope. It's such a versatile device.

How we use our four Mac Minis

We have a lot of computers. Both my wife and I work at home, I'm a tech columnist, coder, project builder, educator, and all-around geek. She's an RN, a tech editor, runs our small business operations, and is a crafter and music maker. As such, we have a lot of tech gear. Even though we're trying to simplify, the computers are still necessary to do our jobs, produce videos, and manage everything.

During the move, we each lived off our laptops. But, for us, laptops are not the most convenient machines. We like large monitors, and lots of screen real estate. My big iMac is also far more powerful, and has a lot more RAM than my MacBook Pro. It's an absolute necessity for many of my more RAM-intensive projects, like video production and network simulations using lots of VMs.

But it's the Mac Mini that's really the workhorse in our home/office environment. Unlike all the other Macs Apple offers, the Mac Mini doesn't require you to conform to Apple's view of what a screen should be. This is important, because we tend to hang our screens on monitor arms and stands, and sometimes use very big screens.

The first Mac Mini we excavated from our mountain of brown cartons was the one that powers what we euphemistically call the "entertainment center," even though I spend far more time working in front of it than being entertained.

If we're lucky, we might get to watch an hour of TV on the 65-inch TCL Roku screen (which we got for less than $600 at Target). We'll spend eight or more hours writing, reading, and working in front of it every day. You could certainly plug a MacBook Pro or iMac into such a screen, but you'd have to figure out what to do with that extra hardware. The Mac Mini just tucks right under the screen and works perfectly, and it's far less expensive than a MacBook Pro.

Our second Mac Mini also lives in the living room, and is the direct result of our getting a puppy a few years ago. When Pixel was a baby, he used to howl and cry if I went into my office area to program, especially when I'd be away from him for a few hours at a time.

I tried setting up a little puppy circus consisting of a gated area with all sorts of toys and gewgaws to keep him interested, but it didn't work. The fact was, he wanted to be on Daddy's lap. No matter how awkwardly I contorted myself, I was unable to work at my desk with him on my lap.

So I set up a Mac Mini on the side of my couch. I attached an extended Ergotron monitor arm to a side table, and by doing so, could bring the monitor in front of my face while sitting on the couch. This actually solved two problems: it reduced the back pain I got from spending 12-18 hours a day at my desk, and it allowed Pixel to sit on my lap while I program or type.

This Mac Mini actually solves a third problem, because it gives us two monitors in the living room, so my wife can work or read on the big screen, while I work on the side monitor. This proves to be particularly ideal when we're doing our banks and bills meetings because we can both see the big screen, but I can also go into accounts and do lookups on the side screen.

The Mac Mini is perfect here because of its tiny size. It just tucks away on that side table, providing compute power without being encumbered by an attached screen. It's quiet, small, and unobtrusive.

Our third Mac Mini is in my wife's office, which also doubles as her craft room. We've attached that Mac Mini to a $289 40-inch TCL Roku TV (we're grooving on these Roku TV's). That gives her a nice, big monitor for desk work, but allows her to watch her shows while she's working on crafts or other organizing projects from across the room.

In this tiny room, space is very much at a premium, so being able to both have a big screen TV and a tiny computer in the same space allows her to get the most out of the space. The 40-inch TV is actually lighter than the old 24-inch monitor it replaced, so the monitor arm can hold it and she can adjust the display to any angle she needs.

The fourth Mac Mini is still in a carton somewhere, but when we dig it out, it will connect to an interface box and a musical keyboard. It's the Mac Mini that records my wife's music, controls and interfaces to her keyboard, mixes in her mic inputs, and is the core of her musical activities. It, too, benefits from being tiny, because it can fit in the inch space available just behind her keyboard and is only slightly bigger than the audio interface. We don't need a whole separate table for just the computer.

Join Discussion for: Ode to the Mac Mini: Craving an update for...