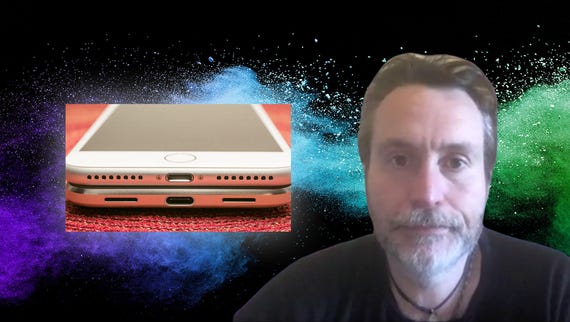 Last week I wrote about how it's very likely that in 2021 Apple will release an iPhone that doesn't have a Lightning port.

I thought the majority of people wouldn't care. I was wrong.

I've had more emails and social media comments about this that anything else I've written about this year. And every comment said the same thing -- don't take away my Lightning port.

Not one person who responded was happy about the change. I found that itself very interesting.

Note: I've had so many emails and comments about this that while I've read every one, I've not had the time to be able to respond. Thank you for getting in touch, and sorry I've not been able to respond to each of you personally.

Now, people are, on the whole, open to change, but some changes seem to cause excessive friction. Thinking just about the iPhone, changes like moving from the 30-pin connector to the Lightning port, making the handset bigger, removing the headphone jack, and replacing Touch ID with Face ID all generated resistance.

But that was nothing like the resistance that exists around taking away the Lightning port.

Having gone through all the comments, I've distilled them down into three main points of resistance:

Let's look at each of these in turn.

Lauco: The world's toughest cable for your... SEE FULL GALLERY

Two things were a place of concern here -- charging while driving and CarPlay. Wireless in-car chargers exist, and there's the range that goes from budget to quality, so that's not a massive issue.

But CarPlay is an issue, and right now, I'm not sure how Apple will overcome this. And given how expensive cars are, I can understand why people are worried about this. A car is a pretty big and pretty expensive iPhone accessory.

A wireless dongle of sorts to solve the problem seems possible, but I can see how this is a concern to people.

I'm certain that Apple would have a solution to this, but as yet, I don't know what this would look like.

Yeah, I remember the same thing when we switched from the 30-pin port to Lightning. Apple made an adapter for that, so it wouldn't surprise me if we saw something similar here, but a wireless solution.

If you prefer wired headphones, then yeah, I feel your pain.

A lot of readers still back up to a Mac or PC using a cable connection because it is faster and more reliable, especially if they have a lot of photos or videos to move.

I feel your pain. Change is change, and a change like this is inevitably going to generate some friction.

It's worth remembering that Apple is likely to only drop the Lightning port on the higher-priced iPhone model, and not drop it completely. Much as with Touch ID, I expect the Lightning port to be around for a few years, and not vanish overnight. This will allow the ecosystem to adapt and adjust gradually to the change.