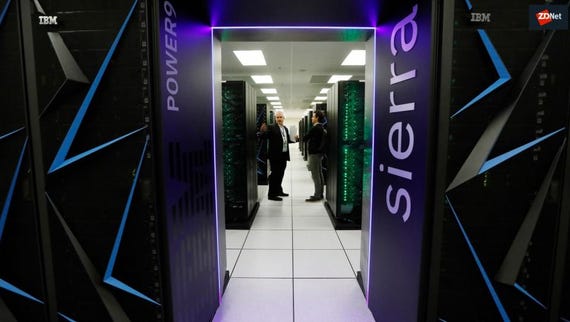 Petaflop capabilities now dominate the supercomputer landscape with all of this year's entries in the TOP500 now delivering these levels of performance or more.

The TOP500 project is a bi-annual report on supercomputers around the world based on the High-Performance Linpack (HPL) benchmark. For the first time since its inception in 1993, only petaflop systems have made the TOP500 computers list.

The entry level required to enter the list is now 1.022 petaflops.

The top two supercomputers in the world, built by IBM, are known as Summit and Sierra. Summit is located at the Department of Energy's Oak Ridge National Laboratory (ORNL) in Tennessee, whilst Sierra can be found at the Lawrence Livermore National Laboratory in California.

Summit is the most powerful of the two, now boasting a performance level of 148.6 petaflops, while Sierra's record remains unchanged from last year at 94.6 petaflops.

See also: The rise, fall, and rise of the supercomputer in the cloud era

The third and fourth places go to supercomputers in China. The Sunway TaihuLight, owned by the Chinese National Research Center of Parallel Computer Engineering & Technology (NRCPC) and located at Wuxi's National Supercomputing Center, comes in at 93.0 petaflops. This supercomputer is powered by over 10 million SW26010 processor cores.

The fourth model on the list, the Tianhe-2A (Milky Way-2A), belongs to China's National University of Defense Technology (NUDT) and is based in Guangzhou's National Supercomputer Center. Coming in at 61.4 petaflops, the Tianhe-2A is powered by a vast array of Intel Xeon and Matrix-2000 processors.

In spot number five is one of only two new entries to the top 10 this year, the Dell C6420. Located in the University of Texas, this supercomputer delivers 23.5 petaflops through Intel Xeon Platinum 8280 processors.

Japan's AI Bridging Cloud Infrastructure (ABCI) supercomputer is eighth on the list, delivering 19.9 petaflops. In the ninth spot is the SuperMUC-NG, a supercomputer capable of 19.5 petaflops and located in Munich. Finally, IBM's Lassen supercomputer, located at the Lawrence Livermore National Laboratory, is the second new entry and takes the tenth spot after receiving an upgrade.

This supercomputer once offered only 15.4 petaflops but has now been improved and has a performance level of 18.2 petaflops.

When it comes to hardware, Intel dominates the TOP500 by providing processing power to 95.6 percent of all systems included on the list. Only one supercomputer in the 500 models listed is powered by Arm.

In total, 133 systems are using either accelerator or co-processor setups. Nvidia is the major GPU supplier.

However, we may see some movement in HPC vendor share during future TOP500 lists, given HPE's acquisition of Cray, contender number five, in May for $1.3 billion. Combined, they have a system share of 15.8 percent, and so should the percentages stay roughly the same in the next study, this could lift HPE up potentially as high as the second spot in the vendor system share rankings.

While supercomputers in the United States once dominated the TOP500 list, in recent years, China has raced up the rankings.

Not only has the country earned its place in the top ten list, but out of the 500 most powerful computers worldwide, China has claimed a total of 219 machines on the TOP500 list. The United States is now in second place with 116, trailed by Japan with 29 supercomputers, France with 19, and the UK with 18 machines to its name.